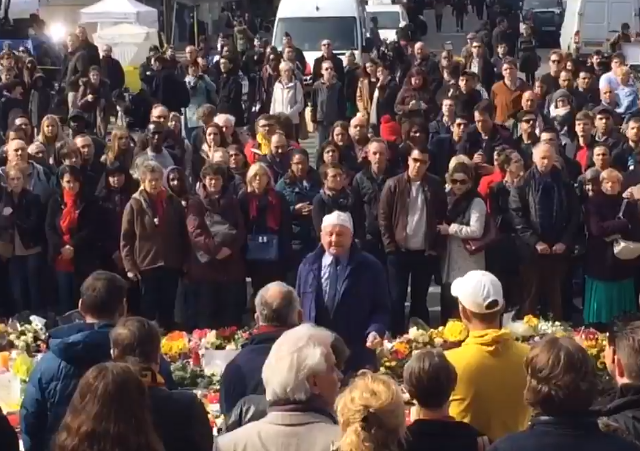 This is getting to be a really, really sick habit.

The other day we posted videos of anti-Israel protesters disrupting a makeshift memorial to those killed in the Brussels terror attack, by ripping up, standing on and covering up a small Israeli flag, Of course: Israel haters disrupt Brussels Memorial site: 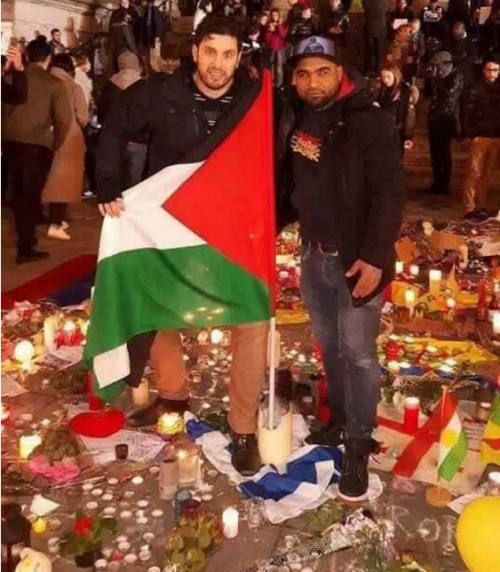 Hundreds of people had gathered, were crying and playing music.

Then a man walked onto the area where the memorials were placed, including apparently an Israeli flag and notes from Israelis, and started screaming “Palestine” “Palestine” as the crowd booed and he was led away:

#Palestine! Yells a man in the improvised memorial in #Brussels before taken by police. pic.twitter.com/laQdStpdOz

An image at The Telegraph shows someone who appears to be the same man.

Despite the disruption, there were many Israeli flags and messages still there.

@nationofseals @SussexFriends There were many Israeli flags and messages when I was there (about an hour ago).

The disruption of the Brussels memorials by anti-Israel protesters reflects a sickness that runs deep.

Perhaps Europe will finally see it too.

Whats wrong with the people. These savages murder them families and they do nothing when these savages desicrate their Memorial. Time to grow a pair and kick the shit out of these Muslims scum.

We’ve been tolerating the Westboro “Baptists” picketing funerals and Code Pink folks interrupting speeches for so long, it’s hard to see why this isn’t a more common occurrence.

These fascist jackboots follow a supremacist, totalitarian ideology of hate that tells them that they are superior to those who don’t share their beliefs, and, that they have Divine license to kill or subjugate those same people.

The ideology of “Submission” must dominate wherever it is present. What is sobering is how unabashed and bold its adherents are, today, about asserting their claim to supremacy in matters, cultural, economic, legal and, obviously, theological. I refer to those adherents who are not directly engaged in jihad. The supremacist urge cannot be suppressed; it must find expression, even in the sanctified place of a memorial space to victims of the same ideology.

Who does that guy think he is, the president?

(…the bride at every wedding, the corpse at every funeral, and the baby at every christening.)

The Belgians have a rich history of making very fine weapons. I am saddened that not one of these sheep has built something to take out these bastards when they show up in this manner.

“. . .the workers of iniquity; who have whet their tongue like a sword, and have aimed their arrow, a poisoned word; that they may shoot in secret places at the blameless; suddenly do they shoot at him, and fear not.
They encourage one another in an evil matter; they converse of laying snares secretly; they ask, who would see them?
They search out iniquities, they have accomplished a diligent search; even in the inward thought of every one, and the deep heart.
But God doth shoot at them with an arrow suddenly; thence are their wounds.
So they make their own tongue a stumbling unto themselves; all that see them shake the head.” (from Psalms 64)