One of our readers stumbled upon the movement in the heart of New York City. 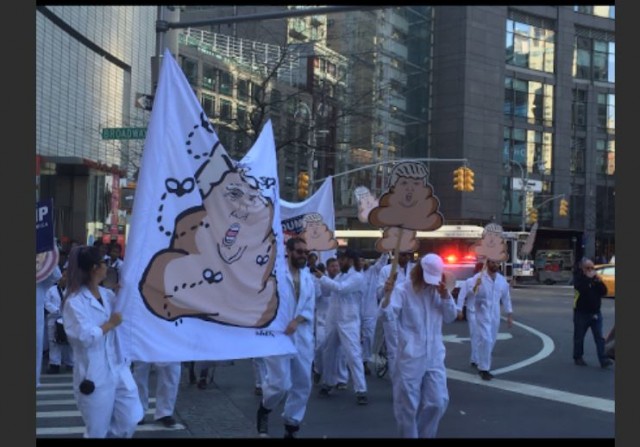 There are many reasons and ways to oppose Donald Trump. Policy, temperament, qualifications are all in play.

But leftists have come up with some very left-wing ways to protest.

One of the left-wing ways is to shout-down and disrupt his rallies:

Another is to hold street marches spewing profanity and hate:

I just found another left-wing way.

A reader in NY City sent me the Featured Image. I couldn’t really figure out at first glance what it was. She wrote:

Near Columbus Circle, from Saturday [March 12].

Still didn’t make sense. So I researched. Apparently portraying Trump as a turd is a thing:

You say potato, I say poop.

Last week, street artist Hanksy hit the road to join the circus in South Carolina. Also known as the Republican primary. Purpose of this so-called “Dump Across America” trip was to sway public opinion against celebrity presidential candidate, Donald Trump.

Hanksy and a gaggle of “bowel movement” loyalists – nicknamed the Doo Doo Boys by a drunk Trump supporter – were able to infiltrate one of the Donald’s rallies in Myrtle Beach last weekend. Their eye-grabbing antics with poster versions of the Orchard Street mural actually angered the man during his speech, and they were 86’d. Except, in his retort to the protesters escorted from the premises, Trump thought the pile of feces his head capped was actually a potato.

Our reader apparently stumbled upon the big event:

Already name-checked by the Donald himself, street artist Hanksy is continuing the anti-Trump momentum. He’s bringing the wildly popular “dump trump” mural-mantra back home after road trips to New Hampshire and South Carolina during the respective Republican primaries.

How mature. They must be Occupy Wall Street types. 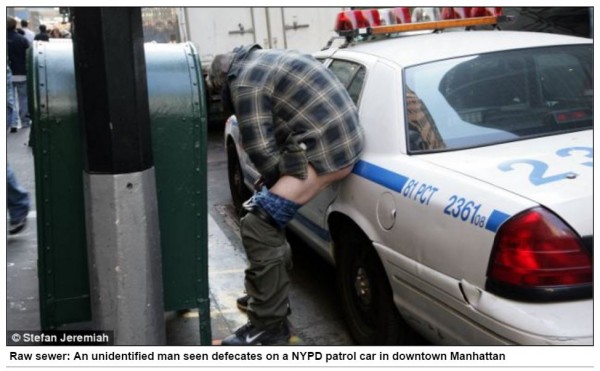 Oh look, the left doing what the left has always done, whining, complaining, rioting and creating chaos. They never should have gotten away with this behavior in the 60s and I don’t know why they did, but now they will over play their hand. None of this behavior is part of a rational society and it is time to smack those toddlers in adult bodies and get them to knock it off.

Of course this is all about firing up their own base. Nobody decent will be persuaded by their disgusting and juvenile antics. They know that. They also know they have an unlikable, uncharismatic, criminal as a candidate. They need to do everything possible to get real people to the polls.

The Donald should know better than to invite rape by lifting his skirt like that. And if he actually gets raped, he should be stoned to death for dishonoring us.

Is there a single adult remaining on the left?

No honest and decent ones. Plenty of terrorists, criminals, and their enablers.

How do they get people to participate in such stupidity?
This is not even grade school level stupid stuff.

Nothing but lost souls. Going from one idiotic rally to another. Zero brain cells left.