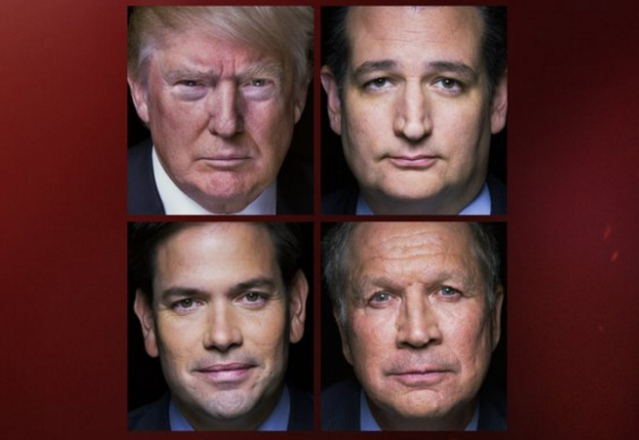 Tomorrow, Florida, Illinois, Missouri, North Carolina, and Ohio have will hold their primary elections. Florida and Ohio are winner-take-all states; no delegate splitting in either.

Here’s the latest from the wild world of campaigns:

BREAKING: Florida Attorney General endorses Trump. “Look at how many people Trump is bringing out in America”

Only tangentially related, but Pam Bondi once postponed an execution so that she could have a campaign party. Raised $140k.

Meanwhile, Trump’s campaign tells a journalist from the Orlando Sun Sentinel to leave the rally or, “go to jail”

Like thousands of others, I attended the Donald Trump rally in West Boca on Sunday night. Like many others, I procured a general admission ticket after registering online. Like many others, I used my smartphone to take photos, videos and post on social media during the event, held at a county park. Unlike nearly all the others, I was confronted with a stark choice by a Palm Beach County Sheriff’s deputy at 8:40 p.m., while Trump was still speaking: Leaving immediately or “going to jail.” I left. “Tell him we’re trespassing him,” a Trump campaign official told the deputy. The campaign official told me his name was Justin. He would not give me his full name or tell me his position, even though I identified myself and gave him my business card. “Just Justin,” he told me a minute earlier, when he approached me and objected to me taking video of people leaving the rally early, while Trump was still on stage. “We can do this the easy way or the hard way,” Justin told me.

“The discourse of our election has become the equivalent of the comments section on a blog.” — Marco Rubio, cutting close to home

Does Trump incite violence? A montage

On #DLRS @tedcruz tells me that if one of his staffers had grabbed a reporter like Lewandowski did they’d be fired immediately.

Rubio tells Bernie Sanders supporter ‘Don’t worry, you’re not going to get beat up at my rally’

Cruz finds a reason not to support Trump

.@tedcruz says he would no longer support Donald Trump if “he were to go out on 5th Avenue and shoot somebody.”https://t.co/c4DBh3khPc

All of your if this, then this scenarios here.

Kasich and Trump are tied in Ohio.

Does Rubio have a shot in Florida?

The best thing on the Internet

PIERS MORGAN: Welcome, Pam Bondi. Let’s start with the Trayvon Martin case. You saw his mother there. Obviously very emotional. It’s been an appalling few weeks for her. What do you make of the debate? Not the issue of whether there was a racial element, but the issue of whether the “Stand Your Ground” law in Florida has been exposed through this case as deeply flawed.

PAM BONDI, FLORIDA ATTORNEY GENERAL: Well, Piers, first let me tell you. I’ve spoken to Trayvon’s parents. They are amazing, sweet, kind people. My heart goes out to them. I’m actually friends with their attorneys Ben Crump and Daryl Parks. They’re wonderful lawyers who are representing them.

What my — I have no legal role as attorney general in the state of Florida. That authority is left to the state attorneys. But what I did do was I discussed with the governor the appointment of Angela Corey, a special prosecutor in Jacksonville who’s well removed from the case. She’s absolutely excellent. And the Florida Department of Law Enforcement are now involved in the case.

The reason, Piers, I can’t comment on “Stand Your Ground”, whether that applies here because there are too many unanswered questions. And, you know, that’s why the family is rightfully upset. When you have an innocent 17-year-old boy walking home with Skittles and an iced tea and he’s killed, you have to have answers

She’s friends with Ben Crump and Daryl Parks and pronounces them “wonderful;” believes that Angela Corey is “absolutely excellent;” and thinks Trayvon Martin was “an innocent 17-year-old boy walking home with Skittles and an iced tea” who was just killed – bam! – out of the blue.

Now she endorses Donald Trump. I totally trust her judgment, don’t you?

Pam Bondi, Romney Superfan in 2012, Says Mitt Wants Romneycare In Every State & She Will Be On His Taskforce

Rothman: “After this weekend of lawlessness and violence with a distinctly racial hint, I’m genuinely surprised to see a state AG endorse it’s author.”

He obviously has comprehension problems. The AG did not endorse Soros, Sanders, anybody in the MSM, BLM, or any other brown-shirt groups.

“He obviously has comprehension problems.”

For far too many people, Mr. Rothman evidently being one, the opportunity to grandstand and virtue signal triggers comprehension problems of the kind so visibly on display with his tweet.

Rubio’s quip was pretty funny, though not in the manner intended. Of course nobody’s going to be hurt at a Rubio rally. The agent provocateur Leftists seeking to censor Trump and his followers know Rubio has no chance of winning and thus wouldn’t waste their time disrupting one of his rallies. Half of them consider Rubio a fellow traveler anyway.

Oh, if Rubio showed signs of winning, they would turn on him, in a heartbeat.

The four pictures of the candidates… Trump scowl, Cruz look of disdain, and Kasich and Rubio with their puppy dog eyes. Who is the author pulling for?

Hilarious new ad by the Citizen Superpac, a Superpac supporting Ted Cruz run by by Chris Gober, whose Twitter profile says he is a lawyer for the Cruz Campaign

I don’t want to ever hear Cruz criticize anybody else’s rhetoric ever again.

What a disgraceful smear. Telling supporters you want to win, strengthen our country, or enforce the law now makes you into Adolf Hitler. They did the same thing to Reagan and Bush of course, but not while claiming to be conservatives.

The YouTube comments are full of trolls making jokes. Sample comment: “who is the cool guy with the mustache and how do I vote for him?”

That, and this article
http://angrywhitedude.com/2016/03/cruz-true-colors/
show Cruz for the kinda guy he is
and how he would lead….

Is there evidence that Chris produced that ad, or is his crowd-funded PAC just seeing whether people want it aired? “Citizens Super PAC” is just a crowd-sourced ad-funding PAC. They even say, “Citizen Super PAC doesn’t censor projects. We don’t control which ones get funded. And we don’t accept money from political candidates. We have only one mission: to level the playing field of political speech by providing a platform for you to make your voice heard.” And that particular ad has received very little in the way of donations to get it aired – every other ad in the running has over $10,000 pledged, this one has about $2500, so it’s obviously not very popular.

I suspect Trump supporters will be bathing in opponents’ tears this time tomorrow night.

Well I’ll warn you ahead of time, I already accept that there’s a good chance Trump will win Florida. We’ll put up as good of a fight as we can against it, but if more people are willing to vote for Trump, then so be it. You’ve got Benjamin Crump’s bestie Pam Bondi and Obama-hugger Chris Christie on board, so you’ve certainly got that solid establishment RINOmentum going for you there.

Y’all apparently know what you want, and you stand on the verge of getting it — good and hard. Enjoy the ride, and I hope it works out better than I think it’s going to work out.