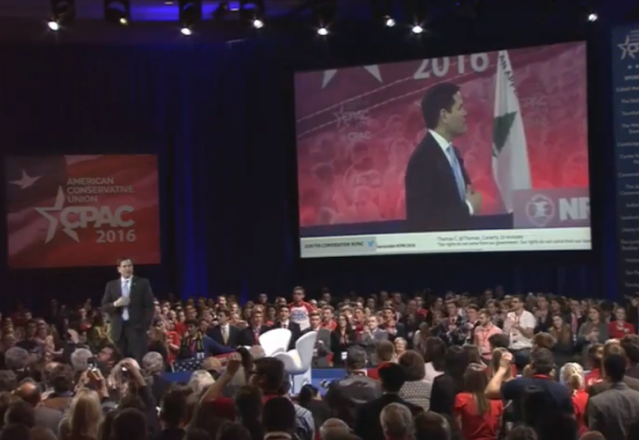 Based on the video, it looked like a full house and enthusiastic crowd. The Washington Times reports:

Sen. Marco Rubio of Florida on Saturday told the conservative grassroots that the country’s young people won’t have a chance if Democrats keep control of the White House — or if the conservative movement is “hijacked” by someone who’s not a conservative.

During the QA, Rubio repeatedly hit out at Trump in response to questions, continuing the combatative style evident in the past two debates. Here is the mark in the video when he most directly went after Trump: “Ronald Reagan looked and acted nothing like Donald Trump.”

During a question-and-answer session after his address, Mr. Rubio said he waited so long to go after GOP front-runner Donald Trump because he was fighting off other attacks and that he didn’t get into the race to beat up on other candidates.

“If you had told me a year ago that the front-runner at this stage in the Republican campaign would be a supporter of Planned Parenthood, who says he doesn’t stand with Israel, who has a long record of supporting government-sponsored health care, I would say, on what planet would that be the Republican front-runner?” he said. “But it’s happened. And I think we have to ask ourselves why we allowed that to happen.”

Whether these attacks on Trump make any difference will depend not on whether it convinces Trump supporters, but whether it stems the flow of non-aligned voters to Trump and takes enough support from Cruz and Kasich to allow Rubio to win Florida.

“And it is time for us to understand that conservatism is not built on personalities.”

This is what we call a “true fact”.

Conservatism is built on principles. NEVER a person.

The same as no free citizen is under the thrall of a cult of personality.

I gave you a thumbs up.

I always give you a thumbs up, Rags (LI writers’ thumbs don’t register, though, so just know it.).

I think Ragspierre has a not so secret love interest. Get a room you two.

In fact, Rubio appears to have taken up some of Romney’s public speaking mannerisms and style. It struck me watching him in the last debate in Detroit. It might be just me but I read body and face language of these politicians and remember them.

Who is coaching Marco? I have a very good guess.

The Romney family has a long history of sabotoging the GOP. Mitts father led the walkout at 1964 convention in opposition to the nomination of conservative Barry Goldwater and split the party and ensured Goldwater’s and the party’s landslide defeat.

Now Mitt Romney, the cruzbots, and the establishment join together to try and repeat history.

As for Reagan this is a different time. Trump is the new era Reagan.

And now their handpicked sock puppet wants to tell US about Reagan someone they always opposed.

“Let’s not forget that it was a guy named Bush and GOP establishment that opposed Reagan and called his economic plan voodoo economics.”

And lets not forget that now it’s a Collectivist COMMAND ECONOMICS boob named Donald J. Trump who runs in opposition to the Reagan MARKET ECONOMICS revolution.

“Now its Bush neocons that control the GOP, oppose Trump, and support Rubio.”

Huh. I wouldn’t say that ANYBODY is “controlling the GOP”. But is there ANYTHING that BOOOOOOOoooooooosh cannot do?

And ONLY “neocons” oppose Der Donald? Naw. Anyone who really HATES the “Establishment” will fight Mr. Establishment.

What a moron. He can’t even keep his lying memes straight.

I see the Ragspierre AI algorithm is back on line. Still set at 5th grade level intelligence I see.

I see all you’ve got is stupid ad hominem.

It would be remarkable for you to deal with arguments and facts. I mean…the crack of doom remarkable.

Based on the results released in Kansas and Maine, we’re seeing a total collapse in Marco’s support.

Stick a fork in him, he’s done.

This is going to be a two way race between Cruz and Trump with Kasich’s Ohio delegates breaking a tie.

Kasich hasn’t got a chance in you know where of winning the nomination. He should have got out long ago; heck, he never should have got in . . . unless it was on the (D) side.

After looking at the recent numbers and watching Kasich’s performance to date, I bet he doesn’t win either state. The recent Kasich polling is just horrendously unreliable (+/- FIVE?? come on!). Trump will do well in Michigan, because crony-capitalism is the name of the game there (I KNOW, because I used to be PART of it).

Trump will do sufficiently well in Ohio simply because of Ohio’s overall liberal leanings (look at their last couple of Governors / Lt. Governors: Voinovich, the RINO “whiner” Mike DeWine, Bob Taft, Ted Strickland, Lee Fisher and finally Kasich). For the last 30 years, Ohio has lurched from Democrat to Republican with just about every election. My best guess is that most Ohio residents will vote for someone to burn down the system rather than elevate the waffling of control that they currently have to an even higher level.

If Kasich loses Michigan, expect him to double-down on Ohio as his last stand. If he doesn’t win Ohio (decisively), then I think Kasich will make a long overdue and very graceless exit, trying to burn everybody on the way out.

I expected him to wax rhapsodic about how big Reagan’s hands were.

Give it up. Rubio is done. As a candidate, as someone with anything worthwhile to say … and as a person worth talking about.

For many candidates there is something quixotic about running for POTUS.

Rubio strikes me as a hillary lite type in such manner that becoming rich off the donor class is more important than actually trying to downsize a gov out of control.
His gun control vote wasn’t real impressive either. He has a B+ from the NRA, but I just don’t trust him. Has a sleazy aura about him.

Quick point–Rubio’s vote for a gun ban in “county and municipal parks” took place during a March 3, 1999 “Regular Commission Meeting.” Breitbart News published the minutes from the meeting and the CCTV video of the meeting as well, both of which show the vote for the gun ban was unanimous between the commissioners.
———-
“He talked the talk, but he didn’t walk the walk,” the NRA lobbyist Marion Hammer complained after Rubio’s house failed to pass legislation permitting employees to bring guns to work.
Source: The Rise of Marco Rubio, by Manuel Rogi-Franzia, p.137 , Jun 19, 2012

But, of course, Donald Ducks ran from that, or he’s be TOTALLY the winnah…!!! The best. Really, like…the biggest and finest. Make your head spin and you’d up-chuck from the bigginess of it.

No, not so much. If Rubio loses Florida, it’s time for him to make a hasty exit and vocally and loudly back Cruz, with the possibility of taking on a VP bench position (which Cruz has already publicly hinted at).

Rubio does that, he MIGHT (and I stress might) be able to save the tattered remnants of his political career. With how badly he has performed in this presidential cycle, he will never again be taken seriously as a candidate. Nobody in future presidential politics is going to give so much as the time of day to a former one-term Senator who ran for President, lost his own home state in the primary and couldn’t win more than Minnesota.

Marco’s best chance at not crashing is to jump out now, before Florida, and throw his support to Cruz. If he can get a solid position during the Cruz presidency and do a solid job he might have a chance at something besides dog catcher in the future. I am just not sold that VP would make the Cruz ticket a solid winner.

Trolling your own blog?

Of course candidate X is not RR … Did you really think anyone would or could be ?