She laughs at the question, then lashes into Trump. 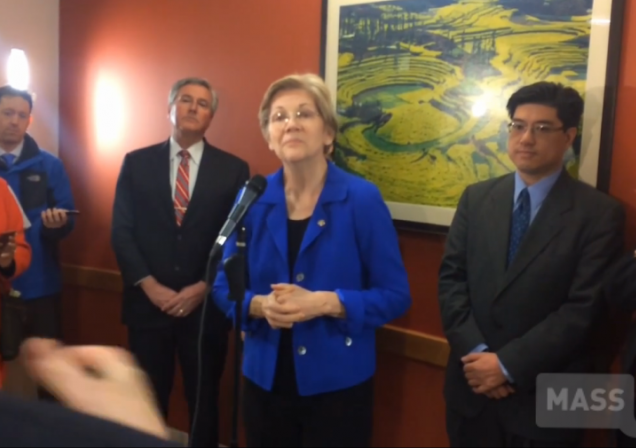 Elizabeth Warren’s false claim to be Indian has been back in the news lately. Donald Trump mockingly referred to her as “the Indian” after Warren had excoriated Trump over recent comments.

Contrary to some media portrayals, Trump was not mocking Warren being Indian (she’s not), he was mocking her false appropriation of Indian identity. (Full details here)

In reaction to Trump’s comment, numerous media outlets have falsely portrayed Warren lately as actually being Indian. I requested corrections, but have not received any responses. (Likely to have more on that in the future.)

The tweet above got be blocked by the Raw Story author. I also tweeted to the Raw Story Editor and Publisher. (Please retweet all these tweets if you are so inclined.)

I also tweeted to Lawrence O’Donnell and emailed his executive producer, with no response:

.@Lawrence Last night U said "small fraction of her [Warren] ancestry is Cherokee" – that is false, will u correct? https://t.co/FLZvq8OqiR

.@Lawrence Trump wasn't mocking Warren being Indian, he was mocking her false claim to be Indian https://t.co/TeP1sSGt6R

.@Lawrence You need to have @pollysgdaughter on ur show for the truth as to Warren ancestry — not Cherokee https://t.co/YKRsqC7Aqy

But an interesting thing happened. Warren invoked the same defense she used in 2012, that questioning the veracity of her claim to be Native American is an attack on her family. Just the opposite is true, of course, since Warren’s family was not actually Indian, and neither is she.

“Donald Trump is a bully, and that’s what bullies do,” Warren said in Quincy this afternoon. “Scott Brown tried the same sort of thing, and if Donald Trump thinks that by using Scott Brown’s hate-filled attacks on my family that he’s going to shut me down, then he better think again. It didn’t work before and it’s not going to work now.”

You can see the news station video here.

Incredibly, just before that answer, a reporter asked Warren if Trump “speaks with a forked tongue,” and Warren didn’t object to that phraseology before launching into Trump. The quote is not in the article, but is in the video:

“Does Donald Trump speak with a forked tongue?”

At which point Warren laughs a little.

Very interesting to me that Warren laughed off the part about “forked tongue,” which obviously was mocking Warren.

Elizabeth Warren has engaged in real “cultural misappropriation” by using a false claim of Indian heritage to obtain enhanced consideration for employment. Indeed, one of her ancestors was an oppressor.

Your nativeamericanophobia is showing! {sarcasm intended}

why doesn’t someone send a sample of her DNA to ancestry.com
and see what they say ….

Or to take a quote of Jay Silverheels from The Lone Ranger series, who must have been talking about Warren, and make the moccasin fit, “[Warren] have the tongue and courage of a coyote. [Warren] speak much but say nothing.”

As a private citizen, she has the right to choose to send in her DNA and receive confidential results. My guess is that this would be one of the first easy fixes to her problem if she was really secure in her convictions of ancestry. Therefore, the two possible outcomes, in my opinion, are that she’s done the test and the results did not exonerate her, or she is afraid of what the test will indicate if she does it.

The question from the reporter is hilarious. The fact that neither the media nor Warren took issue with it but did with Trump’s remark reveals the media hypocrisy for the 5 millionth time. I despise Trump, but he is right that Warren is a liar when it comes to her bogus claim. She is also right that he is a bully.

Two delusional psychos slingin’ it at each other. The question is why? Has humpatrump heard something to the effect that hitliary will NOT be the ‘rat candidate and thus thinks it’s already time to start barbing Warren? Or was he just being his usual jackass self?

She’s a liberal, this is just ancestry reassignment. She “feels” she was an Indian thus it is so in democrat minds.
Might make a profitable law field for you Prof. Get a couple of cases of “white male” ancestrially (sp or even a word?) reassigned Indian guys and sue under an old treaty for millions for past wrongs against them.
Wonder if there’s a line on the IRS form for some kind of tax benefit for being a Fauxahontas?

The “forked tongue” phrasing will sail right over the heads of anyone under about 35 years old. Today’s schools have completely squelched the possibility of any students’ hearing that even as a joke. If I said to any of my kids that “white man speak with forked tongue” they would look at me like I had just put on a white robe and a hood.