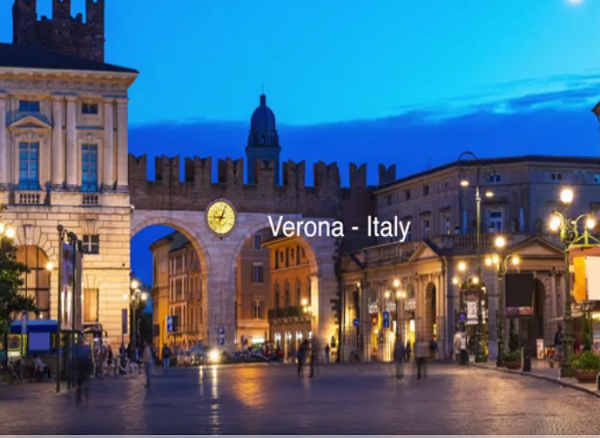 With the influx of Middle Eastern “refugees” and immigrants, Europe is facing some important questions.  One of which centers on its embrace of the failed multiculturalism experiment that has swept across the western world in recent decades.  Everyone from Angela Merkel to average BBC viewers realize that it’s been a mistake, but no one has yet proposed a viable means of correcting it.

One of the myriad problems with multiculturalism is that in its proponents haste to embrace other cultures, the existing culture is belittled, ignored, and if followed to its logical conclusion, ultimately, destroyed.  An Italian city, Verona, is now taking steps to preserve its own culture by limiting the number of ethnic eateries permitted in its historic city center.

A ruling came into effect in the city of Verona this week prohibiting the openings of any new restaurants offering mostly “ethnic” or deep-fried food.

“Thanks to this provision there will be no more openings of establishments that sell food prepared in a way that could impact the decorum of our city,” said Verona Mayor Flavio Tosi, who was elected as an independent after breaking from the far-right Northern League party he adhered to for years.

“This protects not only our historic and architectural patrimony of the city centre, but also the tradition of typical culture of the Verona territory.”

. . . . Despite apparent growing demand for late-night kebabs, the city has been coordinating with the local diocese for years on a strict management plan to safeguard its Italian cultural values and traditions.

While this move flies in the face of a conservative’s natural inclination to defend the rules of “supply and demand,” it’s not difficult to understand the impulse to protect one’s own culture, including one’s own culinary culture.

Another aspect of this decision and its appeal in other Italian cities is the economic importance of the tourist industry.

Despite apparent growing demand for late-night kebabs, the city has been coordinating with the local diocese for years on a strict management plan to safeguard its Italian cultural values and traditions.

It is not alone. So-called “Unesco laws” are under consideration in a number of Italy’s top tourist destinations as local residents have become increasingly flustered by immigrant-run take-out eateries, service points and trinket shoppes they complain degrade their neighbourhoods.

Following is a brief video of gorgeous Verona:

Needless to say, critics of the plan don’t anchor their criticism in capitalist notions of supply and demand; instead, they are citing discrimination against immigrants and refugees.

Earlier this week, Italy’s highest court nullified a regional law in Lombardy regulating religious buildings, which made it harder to construct mosques. With only six official mosques in the country, hundreds of make-shift “garage mosques” have cropped up as unofficial places of Islamic worship.

In addition to the ethnic eatery restrictions in Verona, Venice is considering much more wide-ranging limitations on small businesses within its city limits.

City officials in Venice are considering restrictions to limit mini-markets, trinket shoppes, money transfer points and internet call centres that have proliferated in recent years and are often run by Chinese or Muslim immigrants.

“Some of this gimcrackery, especially when we don’t know even know where its made, is difficult to reconcile with the city,” said Venice Mayor Luigi Brugnaro, who complained that cheap souvenirs of dubious provenance are contributing to the “Disneyfication” of the city. “These are things that have nothing to do with our history and frankly create discomfort.”

It will be interesting to see how this plays out in Italy.  It’s also a discussion worth having here in our own country; the tension amongst supply and demand, support for small businesses, and the protection of one’s own culture and heritage is something we’ve handled quite well historically.  But we aren’t faced with the huge influx of immigrants in a short period of time with which Europe is currently grappling.

Good for Verona. But, much more is needed to keep Europe European.

Multiculturalists, by saying that all cultures are equal and all values are equal, the nihilists must create superintending values to defend themselves against annihilation.

Banning new restaurants that sell deep fried food sounds like something the Mayor of New York would do.

Sadly a finger a the dyke that will probably end up being pulled out by EU bureaucrats.

I often wonder if the Multikulti obsessed crowd ever stop to actually consider how people from an honor/shame culture would view all this cultural sadomasochism when they’re being pleaded with to abandon their native cultures for one being so “shamed” in the public sphere.

Shorty before he died, FDR was alleged to have toyed with the idea of castrating every surviving German male in order to prevent another generation of young Americans from having to march off to quell another World War Germany started.
Islam has been at war with Christianity and the West since 723 AD.
Egyptian President al Sisi in his traditional New Years Day address to Egypt’s Muslim Clerics “Your papers tell you that you, a religion of 1.7 billion people, need to kill the world’s 7 billion other peoples in order for you to live.” ‘You need to get a grip on yourselves’
Before a cancerous tumor can be detected, by feel, X-Ray, or cat scan it has to reach a roughly 2 billion cell size. In order for the clinician to pronounce the host cured, he has to kill every last one of those 2 billion cells.
The Tuberculosis bacillus has the ability to evade completely its human hosts immune response. A host antibody cannot attach itself to the bacillus and then be swept off to destruction of antibody and antigen in the spleen, nor can it be engulfed by macrophages or other white blood cells. When the tubercle bacillus comes under assault by the few antibiotics that do affect it, it walls itself off inside a containment vessel of its own making, waits out the chemical assault, then resumes its infectious advance on its host after the assault on it is over.
Just thinking.

Oboy, are they focusing on the wrong thing.

Sorry a culture hell bent on controlling, killing or reducing the host country’s citizens to serfs isn’t on the “equality” meter. It is a conquering force.

I come to L.I. to gauge reaction to the results of Super Tuesday. I find it leads with a post about some Italian tourist city that is setting a limit to the number of places to buy takeout food.

The gossamer premise of said article is written as if it were generated by the Jargon Edition of a Rubik’s Kube: “One of the myriad problems with multiculturalism is that in its proponents haste to embrace other cultures, the existing culture is belittled, ignored, and if followed to its logical conclusion, ultimately, destroyed.” Sweet Jesus.

We are then told, quite decisively: “It will be interesting to see how this plays out in Italy.”

No. It will not be interesting to see how this plays out. And no. Sticking a Starbucks, a Denny’s, a Chipotle, and Capital Grille on the four corners of any Italian piazza will do NOTHING to “destroy the existing culture” of a country that was founded in 753 BC and doing pretty OK even after being sacked by Visigoths, ruled by emperors and media magnates, corrupted by Fascists, and overrun with tourists. And again I am left to ask Professor Jacobson: WHERE IS THE PRIDE?

“One of the myriad problems with multiculturalism is that in its proponents haste to embrace other cultures, the existing culture is belittled, ignored, and if followed to its logical conclusion, ultimately, destroyed.”

From one extreme to another thanks to class diversity policies. COEXIST is an inside joke told by [class] diversity activists.

COEXIST is an inside joke told by left-wing activists who are anti-native, pro-abortion, “=”, and pro-choice.

Kebabs are the problem? Huh, I guess you learn something every day. And I thought the European multiculti problem was bombs, roving rape gangs, and guys sawing people’s heads off.