Upside: Easier to get restaurant reservations. 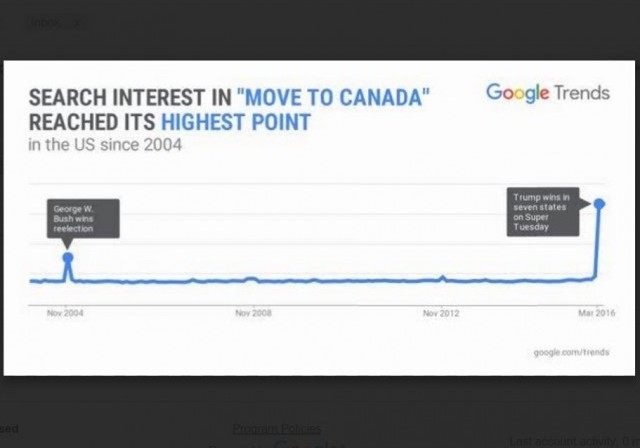 A couple of weeks ago, in response to seeing an anti-Trump bumper sticker in Ithaca, I wrote:

While I’m not for Trump, I have to admit it would be a guilty pleasure to watch Ithaca progressives running through the streets pulling at their hair and screaming about End Times. Half the town would flee to Canada.

Google Politics seems to confirm that this is a possibility, with a tweet 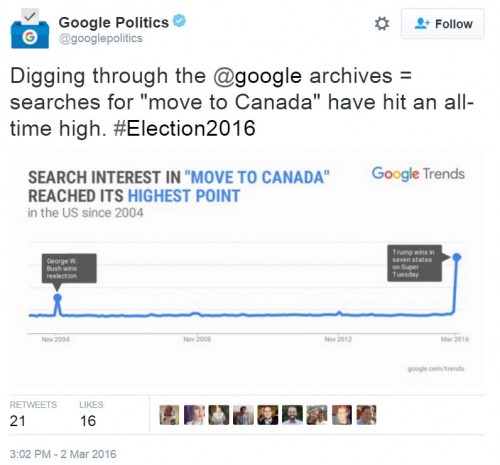 Bonus Question: Would they be missed?

Those are Bernie Sanders Supporters thinking about moving to Canada.

If you go look at online places where they hang out, they appear suicidal. It’s starting to dawn on them how inconsequential they are in what the Democrat party’s become.

I’ll even throw them a going away party!

Double bonus question: Why isn’t anyone wanting to move to Mexico?

Leftists only like brown people in theory. They like the idea of them. They don’t actually want to go live amongst them.

Make America Sane Again – export Trumph to Canada. His lemmings will follow him over Niagara Falls.

“Upside: Easier to get restaurant reservations.”

That line gave me a good chuckle today. Thanks.

I think that there would be significant entertainment value to a Trump presidency, and he would certainly not hurt us, overseas.

The hysteria reminds me of the Doonesbury strips about “Ronnie Ray-Gun” and how crazy Trudeau said he was. In time, I came to see the value in having a President that Gary Trudeau thought was trigger happy.

Before you make any comment about Trump not hurting us overseas, you may want to ask some UK politicians. They were lobbied by Trump a few years back. They kept their word and rezoned Trump’s holdings so his golf course complex could be built. Trump not only broke his word to build a large complex that would create 1400 full time jobs, he sued them- and lost. The actual complex employees 200.

The Scottish politician who had been Trump’s point man on he approvals recently called Trump “a chicken” to which Trump responded that the politician “was a disgrace to Scotland”.

Talk about an ugly American.

People give too much significance to Google searches and what is trending. The fleeting in some way evolves into the tangible. Just another reason why everything is such a mess.

Fondly referred to from the lighter side of the penumbra as: catastrophic anthropogenic government whoring.

Patriots stay and fight for what they believe in. Cowards flee. I don’t care which side of the aisle you stand on.

Another reason to vote for Trump!

Sigh what’s with me and links today?

…The anti-Trump effort being waged by the Republican Party is essentially a fight against democracy.

It’s not that this monster has raised himself up to threaten the ivory castles of the blue bloods, it’s that millions of people have stood up and said, “Enough is enough.”

It is they against whom the GOP establishment is fighting.

Meanwhile, Romney is in there thick, including with regard to the questions in the next debate. Compare his praise of Trump in 2012:

And read this, if you think there’s any difference between Hillary Clinton and the GOPe big-money-backed candidates, except with regard to rhetoric to the little people (even Cruz gets their money):

Eh, Canadah would just build a wall. A yuuuge wall.

Yeah, I don’t get the impression that they asked Canada if the Canadians WANTED them.

Not Mexico? Ironically, they have harsh restrictions on immigration, but curiously not on emigration.

But you will make a GHWBush joke?

How soon before we hear the Canadian side grumble about building a wall and making the U.S. pay?

I think the narrative is flawed. As others have said, it makes more sense that Bernie supporters are looking to move to Canada for their social goodies in the wake of his apparent defeat.