None dare call it a vote buying scheme. 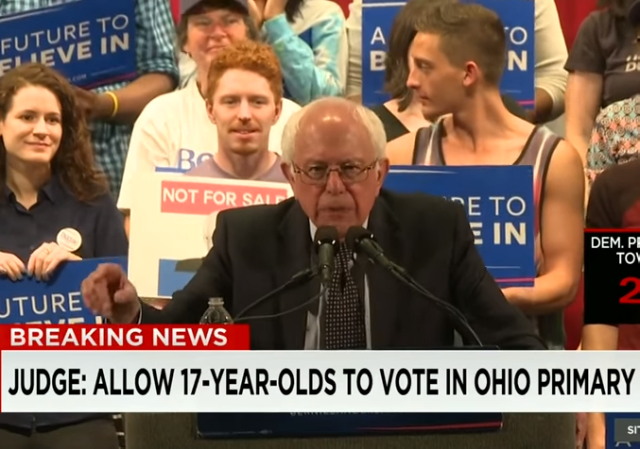 Bernie Sanders draws a major amount of his support from Millennials to whom he just so happens to promise free college and a host of other goodies.

His plan to win in Ohio next Tuesday relies on bringing out the youth vote, so why wouldn’t he want some seventeen year-olds to vote in the primary? He actually sued the state of Ohio for this and won.

Sen. Bernie Sanders notched a potentially significant win on Friday evening when an Ohio judge issued an order, allowing 17-year-old voters to participate in the state’s presidential primary on Tuesday.

Franklin County Common Pleas Court Judge Richard Frye ruled that 17-year-old voters who turn 18 by the day of the November election can vote in the primary, though not on ballot issues or for any contests that would actually elect someone to office.

The ruling trumps a recent move by Secretary of State Jon Husted, a Republican, to block 17-year-old voters in the state from participating on election day, on the grounds that the teens would be voting for delegates, not nominating candidates directly. In December, Husted revised the state’s election manual, which previously allowed the practice.

Frye’s ruling came in response to a suit by nine 17-year-old registered Ohio voters, who disputed Husted’s interpretation of the law.

The ruling is a victory for Sanders’ campaign, which separately filed a federal lawsuit on Tuesday against Husted’s order. The Sanders campaign accused Husted in the suit — which was put on hold Friday by a federal judge — of trying to stop younger voters from exercising their democratic rights.

Here’s a video report from CNN:

How is that not a vote buying scheme?

According to the Real Clear Politics average of polls, Hillary Clinton has a 20 point lead over Sanders in Ohio but as we saw last week in Michigan, many polls have proven useless in this election.

I disagree with Bernie about virtually everything, but he was right about this one. Many states permit 17 year olds to vote in the primary if they’ll be 18 by the general election. Ohio specifically permits it. But the Ohio AG advanced a preposterous interpretation of the law saying that because the presidential primary isn’t “really” a primary – it elects delegates who elect the candidate – then it didn’t count. That’s nonsense. For the first and probably last time in my life, I’m willing to admit Bernie Sanders was right.

Any law allowing a 17-year old to vote is flawed. It’s bad enough that 18-year olds can vote, although conscription of 18-year olds during Vietnam made a good case for lowering the voting age to 18.

It’s not vote buying because nobody is promising money to anyone individually.

If that is vote buying, so is apromise to cut taxes, or a property tax cut, or even a promise to eliminate traffic congestion.