Bernie playing to box out other candidates after Hillary indicted

Bernie playing to box out other candidates after Hillary indicted

Bernie outraises Hillary by $10 million in February, so he has the money to hang on to the end. 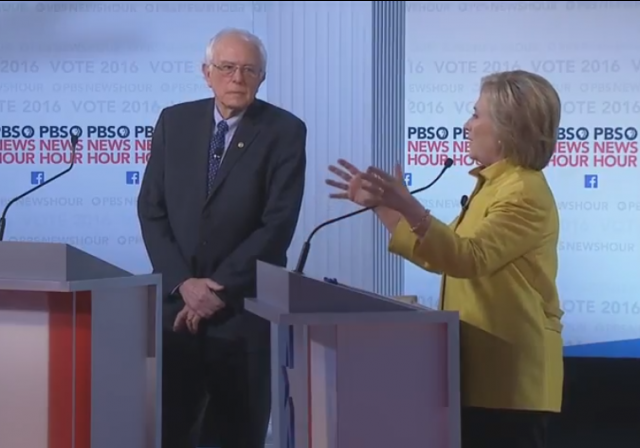 Almost all of my limited attention span has been focused on the Republican primaries.

But this news item caught my attention:

Hillary Clinton raised $30 million in February and has $31 million on hand, her campaign announced on Wednesday — far less than Bernie Sanders.

Her rival, Vermont Sen. Bernie Sanders, raised $43 million in February, with $6 million of that coming on Monday. Sanders’ campaign has not announced its cash on hand, but as of the end of January, he had nearly $15 million in the bank.

Money does not appear to be Bernie’s problem.

Delegates are the problem, where Hillary leads 1,034 to 408. But that overall delegate lead includes 457 Superdelegates for Clinton to just 22 for Bernie. The Democratic primary system is rigged in favor of the consummate political insider.

What is Bernie’s strategy to win? Or in 2016 parlance, what is his “lane” to victory?

I don’t see how he does it. But he has enough money to hang on to the convention, and if he can obtain close to 40% of the vote, he has a credible argument that he should be the nominee if Hillary is indicted or the FBI at least makes a criminal referral to the Justice Department. In either of those scenarios, there will be pressure for the convention to hand the nomination to Joe Biden or someone similar.

But with Bernie sitting there with a large chunk of elected delegates and popular vote, the Democratic establishment will have a hard time pushing him aside.

So that’s my theory. Bernie can’t win against Hillary, but he can make sure that when Hillary falls, the nomination is his.

If Hillary gets indicted (or falls too ill to accept nomination) – look for a Draft Michelle movement. They will not go with Bernie.

Simply entertaining the notion of a President Mooch, with Barky as first lady, makes waterboarding look like fun.

Exactly. I’ve been predicting this for over a year now, and now the president has begun floating the idea.

“When” Hillary falls? You’re dreaming. I mean, nothing would make me happier than seeing that paranoid delusional lose her only shot at glory to a socialist wacko, but you’re really disassociated with reality if you think the same DOJ that’s in Obama’s and Hillary’s pocket will jeopardize her nomination and allow Comrade Bernie anywhere near it.

The only way Hillary will fall is if she slips on a bar of soap.

“Disassociated”? Are you a therapist?

I think the “Draft Joe” movement will be the key movement to watch, I think as popular as the Draft MO movement might be in some quarters, it would be too unseemly on the heels of O’s presidency.

We aren’t Argentina … yet.

But if I was raising that kind of cash, yeah, I would stay in if I were Bernie Sanders. Its a free ride to have the pole position on an indictment of Hillary.

Sanders/Warren would drive the left crazy with joy, would create enough “war on women” magic to make up for Hillary being out, and given what the Republicans look like this year at least superficially, anyone looks potentially electable because its just not a predictable year.

So why have an allergic reaction to Sanders? Worst case you are moving the Overton window on socialism with those two.

Indictment is still a long-shot, but if I’m O, and I see a window for someone other than Hillary to win, then let the hammer drop and be above the fray – “hey, I’m above petty politics, this is the FBI, non-partisan” – and get them to throw in the towel on it later. All you need is an indictment to ruin her chances, you can have the charges dropped later (“end this witch hunt with no real evidence”) and be seen by the left as still protecting Hillary by “rescuing” her from her own poor choices.

Well, I can always dream anyway. My we live in interesting times.

Yeah, me too. My variation on the event, below.

it would be too unseemly on the heels of O’s presidency.

“Unseemly” isn’t in their lexicon. They’ve already begun floating the idea, to get people used to it.

My “comment of the day”…it’s as if you are reading my mind. 😀

If the FBI makes a criminal referral to DOJ, will it be public, or is the referral made in secrecy?

If they refer and it gets squashed by the pol hacks at DoJ you can bet it will get leaked.

When the FBI forwards its recommendation to the DoJ it will be in form of a confidential memo.

Normally nobody hears about these memos. The DoJ either decides to prosecute in which case you hear about the DoJ indicting so and so. If not, no one ever knows the FBI even forwarded a recommendation.

In this case, I would bet that we’ll know about the memo shortly after the FBI forwards it to the DoJ. They’re not going to wait until after the political appointees get around to making a decision to prosecute or not for the simple reason that there’s no time limit on the DoJ to make such a decision.

Clearly this administration isn’t eager to prosecute the Democratic front runner. On they other hand they know they risk a mutiny, no doubt numerous high visibility resignations, and a tsunami of press leaks if they decide not to prosecute her.

So they’ll likely prefer to pretend the decision is hung up in some lengthy deliberative process and try to run out the clock to the election.

And the FBI isn’t going to sit on their hands and let that happen. Somebody will leak about the memo to force the issue.

Oh, how I would like to believe there will be an indictment. Who knows if there will be, but the Democrat machine must have a plan B prepared. In the event I think both Bernie and Joe would be considered poor candidates and would expect a third person. I’m not going to guess, but you have to believe they have or are lining up someone. If done well, it may be the best thing that could happen to get them out of the terrible mess (I believe) they’re in; only two candidates, one with legal, health, and moral baggage sufficient to fill a freight train, the other an ancient old fogey in love with a political system that has failed repeatedly, spectacularly a hundred times. (And took one of his brides to see Lenin’s tomb on her honeymoon! Sheesh.)

OTH, if there is no indictment, Republicans should force Hillary and the Democrats to answer for that every minute of every day during the campaign, to stick to her like stink on a pile of dung and to carry it around like a forty pound bag of cement.It cannot be the sole issue of the campaign, but Democrats must be made to own the decision and voters not allowed to forget it.

The question for Sanders is how can he force an indictment? Perhaps a “Deep Throat” sort of person?

I want to know what political deal(s) Hillary will make that will result in the scandal disappearing.

The GOP is ready to fracture; perhaps the Dems are too? This could really be a landmark election.

The only way Hillary is indicted, is if Obama somehow approves it. ss396 has it right. the GOP is ready to fracture, but so are the Democrats. With Hillary, and Trump getting the nominations, I’m looking at Bernie running on a socialist ticket, and someone else running on a conservative ticket. Thus throwing the whole election into total chaos.

Keep in mind that Sanders is 74 years old. He could have a convenient attack of acute natural causes. Remember that historically, convenient things happen to those who oppose the Clintons.

In other relevant news, the DOJ just granted immunity to Brian Pagliano, the staffer who set up Hillarys server.

Just saw that myself. I can imagine a scenario where after the FBI and DOJ have enough to convict with the cooperation of Pagliano and potentially other witnesses with immunity, HRC is indicted and BO offers her a pardon to drop out of the race and pledge her delegates to support the Joe/Liz ticket.

I’m still not sure that Obama didn’t make Hillary SoS in order to allow her to screw something. He doesn’t like her and the feeling is mutual. Whether or not he put her in a position to fail, I can see him stringing this out to the last moment, and then permitting an indictment to go through. What’s in it for him? He gets to play power broker for the party, and can practically hand-pick his successor.

Obama just isn’t that into Hillary, big guy. The only reason he made her his Secretary of State was because of the old adage, “Keep your friends close and your enemies closer.”

If the FBI really has the goods on Hillary, I don’t believe Obama will make much effort to keep her from going down. I’m sure a big part of him would enjoy it.

Anointing Mooch at the convention and foisting her on the American people without her getting a single primary vote is just his style. And I’m sure that approach has a great deal of appeal to him as well.

Can anyone say that they have heard ONE single reporter or moderator ask hillary what she would do if she is indicted? Talk about the elephant in the room! But so far none of the debates has even mentioned the FBI investigation or the possible consequences.

I do not see Loretta Lynch as the next coming of Elliot Richardson, but I do see James Comey as the next Archibald Cox.

If she stonewalls and Comey (and/or others) resign, it’s not quite as big of a mess, but big enough to weaken Hillary. The real question is, do they think they’re better off trying to stonewall this through the election, or is the Party going to act prophylactically?

Obama will delay any announcements from the DOJ until after the Convention. Biden will be fed an amazing speech that will leave everyone present wondering why Crazy Uncle Joe isn’t their boy. Joe never would have survived the spanking Hillary would have given him in the primaries. This way he can remain un-bloodied so that when the indictments come down in September he can step in and rescue the party. At that point it’s too late for Bernie to mount a third party Green Socialists run. The longer they wait to bring down the ax on Hillary, the less chance Biden has to mess up with a repeat of his Turrets laughing act in the debates.