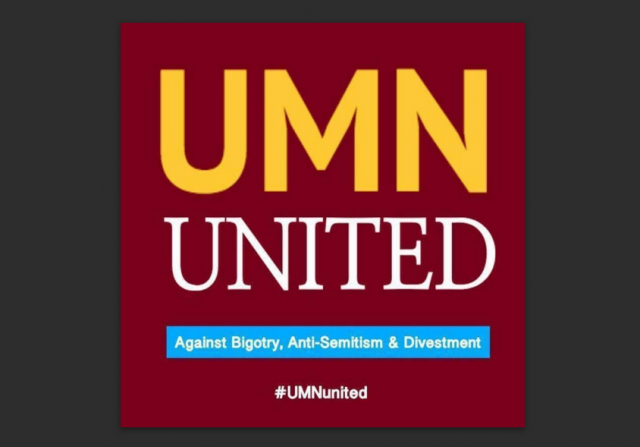 Supporters of the anti-Israel Boycott, Divestment and Sanctions (BDS) movement had high hopes at passing a divestment motion at the U. Minnesota student government. Students for Justice in Palestine (SJP) put everything they had into it.

Forum is FULL and we haven't even started #UMNDivest pic.twitter.com/xtIAyLnjat

The student council at U. Minnesota, however, was having none of it, and passed a motion to strike both the divestment resolution and a counter-resolution to declare BDS anti-Semitic.

This was similar to what happened at Cornell two years ago, when a motion to table was passed. This is the most devastating blow to the BDS because they don’t get to put on their multi-hour dog and pony show making false accusations for the cameras and their supporters. They don’t get to dominate everyone’s time.

U. Minnesota Hillel issued the following statement on Facebook:

This evening, the Minnesota Student Association voted to strike a resolution that would have called upon the University of Minnesota to divest from companies that do business in Israel. This vote most likely removed the divestment issue from the MSA agenda for the year.

MSA members wisely voted to reject divestment and end a process that student Senators said at the Forum marginalized members of the campus community and made students feel unsafe. MSA members decided that student government was not the proper venue to adjudicate the Middle East conflict and to focus instead on issues that are central to campus life. We applaud the MSA for not allowing UMN student government to be used to hold one country and one community to a double standard.

We are extremely proud of the students at Minnesota Hillel, Students Supporting Israel, and the entire UMN United community for their tireless work on these measures.

Here is the announcement of the result:

SJP was particularly mad at this graphic mocking the divestment logo (image via Mondoweiss) via Academic Engagement Network(link no good now)): 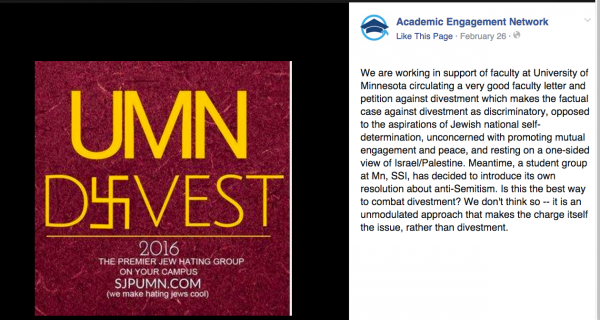 The reaction to the loss is not good:

Don't sign up to represent the students if all you're going to do is show us the middle finger. #UMNDivest

@SJP_UMN This is such an ugly slap in the face. A large, peaceful, and loud demonstration should be called, at the next meeting #UMNDivest

Wonderful news! I am very happy that there are still some in academia who see the light and support Israel.