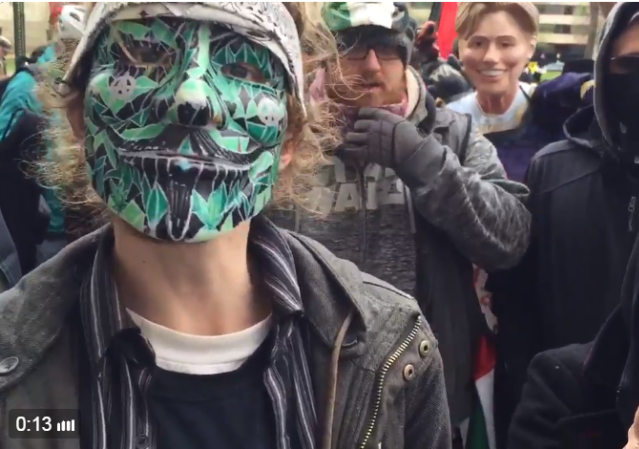 The American Israel Public Affairs Committee (AIPAC) is holding its annual policy conference in Washington, D.C. There are 18,000 attendees.

Today was a rally for Palestine, and the marchers (200-300 based on the videos posted online) marched to the AIPAC conference location where protesters heckled people trying to enter. There also were the usual Code Pink antics, such as trying hard to get arrested by blocking doors (so far this year, no arrests). The main Code Pink protest is Monday, and I’m sure they will try hard to get arrested for publicity, as they did last year.

But there were far more aggressive and dangerous people in the crowd, as this video shows.

Language Warning on all videos

(Video Via The Right Scoop via Townhall)

(added) The Townhall reporter on the scene, Leigh Wolf, recounts how the anti-AIPAC crowd falsely is claiming a journalist was attacked by AIPAC attendees:

The “journalist” is ANSWER coalition member Mike Prysner. Far from a journalist, he is in fact with the organizers of the Anti-Israel protest….

But the journalist who is claiming he was attacked by an AIPAC attendee seems to forget that I filmed him threatening two conference attendees.

The first video is the incident itself showing AIPAC members fleeing an angry mob.

The Anti-Israel crowd could be heard screaming “run inside” and “that’s what you get. …

The second video is my interaction with the journalist who claims he was attacked. This video was taken moments before the incident. He can be heard warning AIPAC attendees that they are “lucky” the police are close by.

Interestingly, the video shows Medea Benjamin, one of the co-founders of Code Pink, and Ariel Gold from Ithaca, NY, who works for Code Pink, near the scuffing, though there is no indication they were involved. 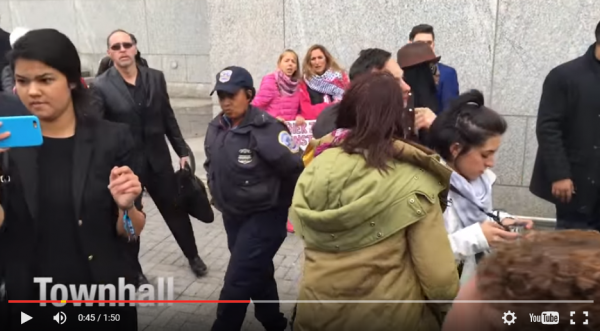 Joel Griffith, who I know, also was there and posted these videos, including an assault on him and the police non-reaction:

We will follow up as more information becomes available.

Will the media make excuses for the anti Semetic violent protestors because Trump is there?

You can make book on it.

No, just like the Jew hatred at college campuses across the country, it’ll either be ignored or blamed on Israel

Wasn’t ignored by us.

These malignant clowns won’t be taking this nation by force.

I saw a Rabbis Against Trump or some similarly named spokesperson on CNN this afternoon arguing that Trump’s desire to speak disrespectfully about Islam (whatever that means) disqualified him from being president. And then we see this.

That guy’s a rabbi like I’m a lama. I’ll bet he can’t learn a page of gemara without help.

Wouldn’t these anti-Israel protesters’ efforts be more effective, if they went to Israel, and protested there?

That would require them to actually do something. Plus if they go to Israel the cops there might actually, you know, arrest them! How can they collect their U.S. food stamps in an Israeli prison???

It’s too hard to use EBT cards or make withdraws from their trust funds in Israel. I don’t think their Xbox & Playstation accounts will transfer over either.

Wonder when they’re going to start protesting against Egypt, too?

This is what I was talking about when I said riots should be dealt with whatever was necessary to stop the crimes committed. We used to know how to break up riots and looting once upon a time.

Now we are at the mercy of our idiot leaders and chattering class that actually want the violence and sometimes pay for it like Soros.

Such protest shouldn’t be tolerated at all, as the following can give rise to other bigger problems. Due to which it is, mandatory nowadays to maintain peaceful protest, then the violent ones.

What do the Guy Fawkes masks mean? They want to blow up the government?

Pretty much. These are Black Anarchists. It’s their occupation (no pun intended), their hobby, and their identity. They are very mobile and very well co-ordinated.

They know nothing about history or truth…just noise and nastiness.

I find it odd that Up until the late 60s the Klan was the democrat military wing now they seemed to be replaced by these types. Still with mask to hide their faces. But the same tactics oppress the opponents of the democrats.

Saw that pic of the Rage Boy wearing the mask. I believe he was voted by his senior class as “Most Likely To Become An Unhinged Loon, Get Arrested, And Get Raped While In Lockup.”