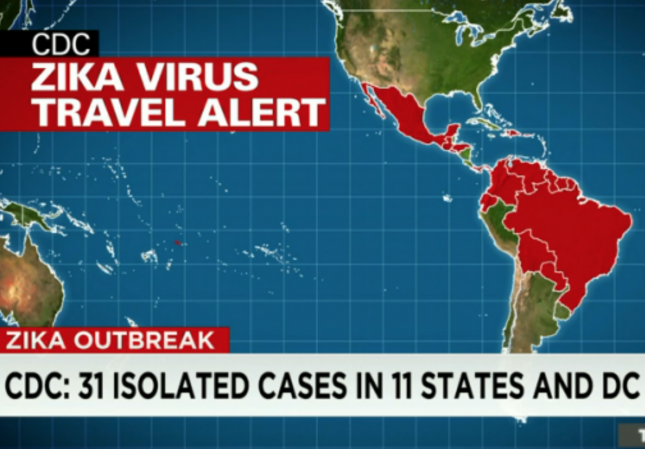 The World Health Organization officially declared a “public health emergency of international concern” over the wildfire spread of the Zika virus.

The agency said the emergency is warranted because of how fast the mosquito-borne virus is spreading and its suspected link to an alarming spike in babies born with abnormally small heads — a condition called microcephaly — in Brazil and French Polynesia.

Reports of a serious neurological condition, called Guillame-Barre Syndrome, that can lead to paralysis, have also risen in areas where the virus has been reported. Health officials have specifically seen clusters of this in El Salvador, Brazil and French Polynesia, according to WHO’s Dr. Bruce Aylward.

Brazilian officials are claiming the outbreak is even worse than reported, because most cases show no overt symptoms of “Zika”. Therefore, testing potentially infected people (especially pregnant women) will be one element of controlling the public health crisis.

Fortunately, a German company has developed the first Zika test kit. Researchers at a biotechnology company called Genekam have developed an effective method to determine Zika pathogens levels in a blood sample.

Due to the emergency, the product is avoiding the usual regulatory entanglements.

The test works in real time, which means it brings quick results, and is the first of its kind for Zika. Until now, patients could not be diagnosed until or unless they developed symptoms.

“Our test examines DNA and works with chemicals that react to the Zika virus only,” Sudhir Bhartia, one of the test’s co-developers, told DW. “Similar pathogens like Dengue fever won’t show up in the results.”

The first delivery of kits is already on its way to Brazil. Usually, tests like these have to go through a long testing phase themselves before they’re authorized. But because the virus is spreading through South America so quickly, authorities have made an exception.

This is good news, indeed. Zika has impacted Mexico, and mosquitoes don’t respect borders. The latest American diagnosed is located in the San Antonio, Texas area. Though the infection occurred during travel, it is only a matter of time before the U.S. experiences a home-grown case. Currently, 36 people in the U.S. have been reported as infected and a researcher at Boston Medical Center warns that Zika virus could spread quickly to and potentially within the this country.

[Davidson] Hamer and his co-author, Lin Chen, MD, of the Mt. Auburn Hospital Travel Clinic, say there is substantial risk of introduction of the Zika virus in the US given the presence of the mosquito species that carry the virus, Aedes aegypti and Ae. albopictus, in many states. While people in the US shouldn’t panic, he said they should be aware and vigilant.

“If you are pregnant, put off travel to the endemic areas,” Hamer said. “If you absolutely must go, be sure to protect yourself against mosquitoes. For those who are not pregnant, it’s still a good idea to delay travel so that you don’t risk getting infected and transferring the virus back home – there are many unknowns about its transmission, so there is still a risk.”

Hopefully the new test will be followed by an effective vaccine. The good news is that because they have been questing for a Chikungunya vaccine for the other South American epidemic, an Australian team may be poised to fast-track one.

Adelaide researchers believe a vaccine they have developed for the Chikungunya virus could be adapted to help combat the Zika virus.

For the past four years, a team from the University of South Australia have been working with biotech company Sementis to develop a vaccine for the mosquito-borne Chikungunya virus.

With pre-clinical studies showing the vaccine to be 100 percent effective, they believe it could – if adapted – prove a game changer in the battle against what could be the next global health epidemic.

“We think we’re in a good position. We could be among the frontrunners for not only Zika virus but other emerging infectious diseases,” researcher professor John Hayball said.

I hope Hayball is correct, because experts have certainly been behind the 8-ball in response to recent epidemics.

*sigh* As was the case during the ebola epidemic, there is some damn fool wandering the Interwebs pasting non-specific links that supposedly prove that some large international corporation “patented” this virus a few decades ago. This misinformation was presented by the Stupid People to prove that ebola virus was “invented” by evil white researches, and it actually resulted in attacks upon researchers (deaths), not to mention a lack of co-operation among those infected.

This is an old slander, and those who have bothered to watch video clips of Rev. Wright will recognize the same lie with respect to HIV infection, which resulted in a rate of new HIV infections in the United States among black people that looked like a third-world country.

The US has funded a LOT of research into emergent viral diseases. There are all kinds of nasty diseases bubbling away in animal reservoirs in somewhat isolated places in the world. Those who work in the field have long recognized that human trade and travel can be vectors for catastrophic spread of disease.

The US has taken a proactive stance. One of the many aspects of this stance is to 1) allow the patenting of chemicals isolated from viruses, and 2) maintaining an enormous database of information about the chemicals found in viruses.

Despite the popular usage, a virus itself is not patentable. Researchers do not invent viruses. They find out what chemicals viruses are made of and what chemicals viruses use in their life cycle. They publish this information in both papers and patents. The patents allow research groups to (sometimes) recoup their costs or to even profit, where the information is used to construct an analytical method or treatment for a disease.

The existence of this collected information about viral chemistry is a critical component of our national response to a viral outbreak. These days, research on a given virus can proceed much faster than before. For example,

A real-time, cheap DNA test for Zika virus has already been developed in Germany, and the first test kits have already been shipped to Brazil.

and, researchers in Australia are already working on a vaccine.