Elder of Ziyon Schools Vox on the History of Israel 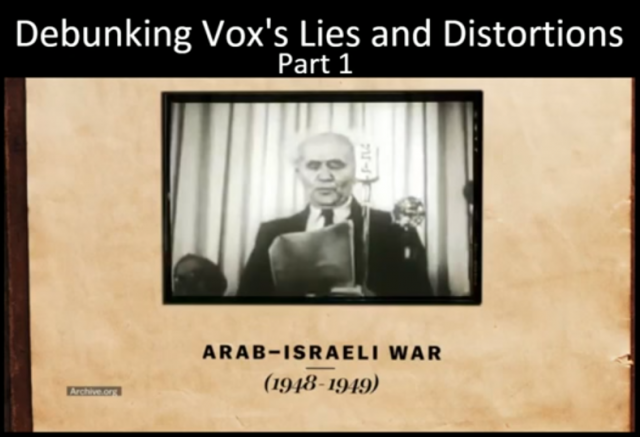 In the middle of January, I dissected Vox video purporting to distill the Arab-Israeli conflict into 10 minutes. But those ten  minutes were littered with countless errors and omissions. I wasn’ t the only one weighing in, of course.

Elder of Ziyon, one of the longest running pro-Israel bloggers has taken the criticism to a new level, in a video critique of the Vox video. This is no easy task – and I admire his patience and cool – as his critique of the first three minutes clocked in at 17 minutes. As Elder put it:

I’m not certain I will create parts 2 and 3, because I don’t know who will want to spend maybe 45 minutes listening to a critique of a ten minute video. Literally every ten seconds I nI ceeded to stop to respond to another distortion or lie.

I certainly had that feeling reviewing the video:

The first critique from EoZ is to blast the framing of the video as setting up a straw man. The video stated that contrary to popular belief the Israel-Palestine conflict has not been going on for centuries. EoZ rebutted that Palestine and Israel as they are currently known have not existed for that long. He also rejected the assertion made by Vox that religion plays no role in the conflict as saying that if you go back in history looking at relations between Jews, Christians and Muslims, “you can’t say that religion doesn’t play a big role in this conflict.”

Regarding Vox’s attempt to frame the conflict as going back to only 1900, EoZ said, “This video is trying very hard to frame things to start in 1900, because when they do it that way they make it look like Jews really didn’t exist in any serious numbers or that they weren’t an important part of the Middle East before 1900, and that most of the Jews that came, came from Europe. That’s really the subtext of this video.” (emphasis mine) This was also my impression.

I will leave you with that introduction and you can watch the full 17 minutes.

One last point, I left out. As EoZ observed Vox claimed that the conflict was relative recent and that religion played no role in it. Here is article 6 from the Palestinian National Charter: “The Jews who had normally resided in Palestine until the beginning of the Zionist invasion will be considered Palestinians,” and here is article 20: “The Balfour Declaration, the Mandate for Palestine, and everything that has been based upon them, are deemed null and void. Claims of historical or religious ties of Jews with Palestine are incompatible with the facts of history and the true conception of what constitutes statehood. Judaism, being a religion, is not an independent nationality. Nor do Jews constitute a single nation with an identity of its own; they are citizens of the states to which they belong.”

The Palestinian national movement, which the Vox video is defending,  in its founding document acknowledges that religion and history are part of the conflict. By denying national characteristics and the history of Judaism, the Palestinians were admitting (through their denials) that those are two issues that they are fighting over.

Next Mr. Gerstman and Elder of Ziyon will be denying the Israeli military blew up the bridge from the West Bank to the Gaza Strip, just to make Vox’s Zack Beauchamp and Vox look ridiculous.

No bridge, eh? Then what’s this in the picture?

Since when has the historical truth ever mattered to the palestinian supporters?

Anyone who claims the war between the Muslims and the Jews didn’t start until 1900 obviously hasn’t read the Quran.