So much in so little time. 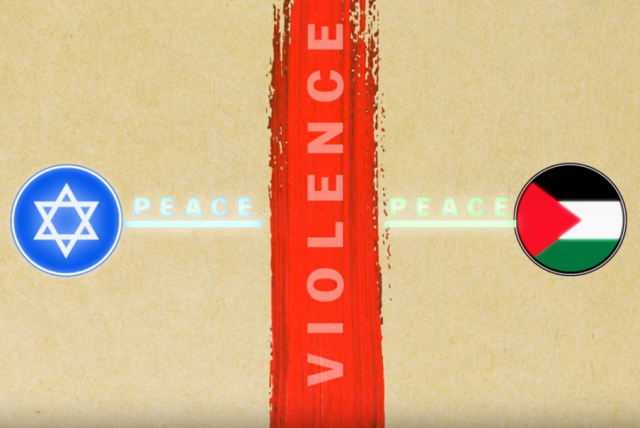 Vox.com, which purports to “explain” things, has turned its attention to the Israeli-Palestinian conflict. The results are not pretty. Truth takes a backseat to revisionism and a combination of ignorance and propaganda forces out knowledge.

Here’s the video, but be sure to read the explanation below as to how it misleads:

Another way this is manifest is that in the post-1967 portion of the video, Vox uses the term “terror” once, but some form of the word “occupy” six times. (It’s true that the video acknowledges that Hamas seeks to destroy Israel, but the term “terror” is used once.)

The video starts one hundred years ago and it talks about how Arabs in what is now Israel and its surroundings were starting to develop a national identity as political Zionism started to gain currency among the Jews in Europe. Immediately you see the way its framed: Indigenous Arabs vs. European usurpers.

Of course what this doesn’t tell you is that at that time the area now called Israel was called Palestine, and the Palestinian identity of the time was not an Arab one.

The video tells of the aftermath of the first World War and how the Britain and France divided up the Middle East. It talks of the British Mandate but doesn’t acknowledge that it included Transjordan (today Jordan). The British Mandate through a sleight-of-hand is reduced to Israel, the West Bank and Gaza, which was partitioned by the United Nations.

But then in one of those unbelievable constructions informs us that Israel  in winning its War of Independence, extended “well past their borders under the UN plan.” The question as whether Israel should have been bound by a partition plan that the Arabs rejected isn’t addressed.

Finally it tells us that as a consequence of the war Israel “expelled huge numbers of Palestinians” causing a “massive refugee problem.” Finally the video informs us that their descendants now number 7 million. The video offers no source for that number.

On the other side the video allows that Jews in Arab lands “fled or were expelled.”

There are two major problems with this breakdown. The first is that most Arabs left on their own and were not expelled but that most Jews were indeed expelled. Furthermore as Mitchell Bard at the Jewish Virtual Library pointed out, “The number of Jews fleeing Arab countries for Israel in the years following Israel’s independence was roughly equal to the number of Arabs leaving Palestine.” Of course there was another issue that Bard pointed out “Of the 820,000 Jewish refugees, 586,000 were resettled in Israel at great expense, and without any offer of compensation from the Arab governments who confiscated their possessions.”

The next major whopper came in its discussion of the Middle East following the 1978, when the video informs us that “over the next few decades the other Arab states gradually made peace with Israel.” The qualification “even if the didn’t sign a formal peace treaty,” doesn’t make that statement true. It’s true that following the Oslo Accords with the Palestinians that Jordan followed Egypt and signed a peace treaty with Israel. But no other Arab states did.

At this point the video purports to give a history of the Palestinian fight against Israel. It starts by saying the PLO formed in the 1960’s and that it sometimes engaged in acts of terrorism. It was a convenient blurring of the fact that the PLO was formed in 1965 (or its terrorist act was in 1965) and that it was before Israel was in possession of the West Bank and Gaza. Though it then says that the “initially the PLO claimed all of British Palestine, meaning that it wanted to end the state of Israel entirely,” the narrative continues without reflecting on what this means. Furthermore the PLO didn’t just engage in acts of terror, terror was its defining tactic.

Again by saying the PLO “initially” sought Israel’s “end” is misdirection. The PLO’s successor organization, the Palestinian Authority, even after making a peace deal with Israel, has made a point of delegitimizing Israel. Dan Polisar who studied Palestinian polling results for the past twenty years observed that “most ordinary Palestinians do not believe Jews have a right to a state there.” This is the result of decades of indoctrination.

After this the video tells about what it calls “settlers,” which made “the occupation much more painful for Palestinians.” And this background is used to justify the first intifada. Following the intifada in the video tells us that both sides saw the need to make peace which led to the Oslo Accords, “which allowed the Palestinians a little bit of freedom to govern themselves.” Of course this ignores how huge this was at the time.

But then the video engages in an awful equivalence. On one side there was Hamas which engaged in suicide bombings (though the word terror) is never used and the Israeli right protested the accords. The missing context is that the Oslo Accords gave Palestinians territory AND responsibilities. The failure to stop Hamas (and there is every indication that Arafat approved the Hamas terror) was huge. The protests against the Oslo Accords would have had no traction if the Oslo Accords had afforded Israel peace. Instead Israel experienced a huge upsurge in terror.

After mentioning the assassination of Israeli Prime Minister Yitzchak Rabin the narrator intones solemnly, “this violence showed how extremists on both sides can use violence to derail peace and keep the conflict going as they seek the other side’s total destruction.” If Rabin’s assassination had stopped the peace process that assertion would have a measure of truth, but in the seven weeks following the assassination, Rabin’s successor withdrew Israel from all the major Palestinian population centers in the West Bank. But in February and March of 1996, Hamas hit Israel with a series of suicide attacks killing scores.

Hamas wasn’t trying to stop the peace process, it was trying to kill Jews. By failing to act on intelligence that Israel had given him, Arafat allowed this terror to occur. As Charles Krauthammer described the situation  at the time:

The “peace process” is in fact nothing more than a unilateral Israeli withdrawal. The Palestinians have gotten Gaza, West Bank autonomy, huge influxes of foreign aid, international recognition, their own police force, their first free elections ever.

In return, Israel has gotten what? Pats on the head from the United States. The occasional trade mission from Tunisia. And, from the Palestinians, death. This is peace?

The Labor Party’s idea was that it would give up the territories and contract out anti-terrorism to Yasser Arafat. From the beginning it was obvious that Arafat was either unable or unwilling to control Hamas. If unable, the peace process was an illusion; if unwilling, it was a deception.

The video continues to explain that negotiations continued and in 2000 the United States convened a summit at Camp David but according to the narrative the efforts to complete a peace deal “come up empty.” Because, “the Palestinians come to believe peace isn’t coming rise up to a second intifada, this one much more violent than the first.” 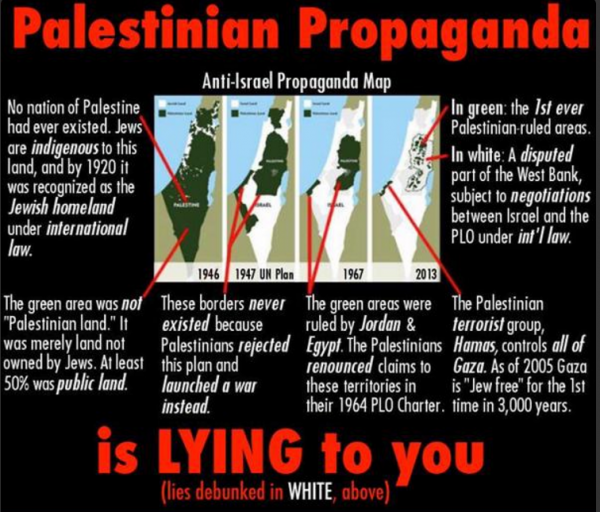 The  Camp David summit failed because Arafat said “no” to Prime Minister Ehud Barak’s (too) generous offer. Then, as we now know, Arafat orchestrated the intifiada’s terror probably to deflect from his own refusal to make peace. Once again Vox excuses Palestinian culpability for the lack of peace and its deadly terror.

All of these Palestinian land gains have taken place in the last 20 years and every square meter of it came not from Turkey or Britain or Jordan or Egypt, but from Israel alone; and nearly all of it through peace negotiations.

Whereas Vox focuses solely on what the Palestinians don’t have (and doesn’t assign them any blame for that outcome), Mor points out that it is only Israel that allowed the Palestinians ANY autonomy. (Does anyone believe that if Jordan had retained control of the West Bank in 1967, there would be any degree of self-rule for the Palestinians?)

To Vox the Israeli-Arab conflict is about 100 years old and it summarized the conflict in 10 minutes. To shrink things down so much you have to leave out a lot of material, which Vox did. By consistently leaving out critical information about Palestinian responsibility for their own plight, playing down the role of terror and Israel’s contributions to coexistence Vox distorted the Middle East.

Even within the first two minutes of the video, there are two egregious errors. one was the reference to violence by both sides in the 1920’s. In that decade, the Irgun had not yet been formed, and the Haganah was in its infancy, formed solely to defend Jewish farms and towns against Arab attacks. The Haganah didn’t even mount offensive attacks until, with the help of Orde Wingate in the 1930’s, it formed the “night squads” to pre-emptively disrupt Arab terror groups during the Great Arab Revolt. In addition, while the Mandate for Palestine is mentioned, the video omits mentioning the entire purpose of the Mandate given to Britain– to develop a Jewish state.
In this case, simplifying a complex issue leads to less, rather than more, understanding.

Michael – I know. I was thinking of addressing that dishonest 1920’s equivalence too, but I got caught up in other aspects of the video.I only had a finite amount of time.

You could have just stopped there, lol.

Yes indeed, Vox distorts history, lies about the present and would change the future to their liking, if they could.

This line needs some attention –

The British Mandate through a sleight-of-hand is reduced to Israel, the West Bank and Gaza, which was partitioned by the United Nations.

The various worldwide Mandates—Palestine being the only one relevant here—were established by the League.

Um, what is your point here? How is the League of Nations’ role in granting the mandate in the first place relevant to this sentence? It was the United Nations that proposed the partition.

CalFed, I was thinking of this:For every complex problem there is an answer that is clear, simple, and wrong.

(though the word terror is never used*)*