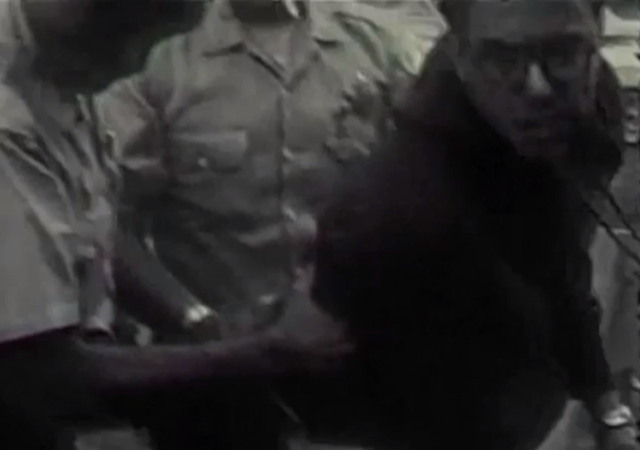 Man Captured on Film Being Arrested in a 1963 Protest is Bernie Sanders, His Campaign Says

In recent days, Hillary Clinton’s campaign has questioned Senator Bernie Sanders’s commitment to civil rights, trying to cement her support among black voters who could be crucial in upcoming primaries such as South Carolina’s.

A lifeline has now arrived for the Sanders campaign, in the form of film footage more than half a century old.

On Monday, a film company, Kartemquin Films, uploaded footage of a young man, wearing thick glasses, surrounded by police officers who grabbed him by his arms and carried him away.

The man looked like it could be Mr. Sanders, so the company asked the public and Mr. Sanders to help confirm whether it was. On Friday, Michael Briggs, a spokesman for Mr. Sanders’s campaign, and Tad Devine, a senior adviser to the campaign, said Mr. Sanders had said it was him. What sealed it was the watch the man is wearing; Mr. Sanders recalled owning a watch like that, Mr. Devine said.

Is this Bernie Sanders being arrested? from Kartemquin Films on Vimeo.

Bernie Sanders was being arrested at a civil rights demonstration while Hillary’s husband went on to be mentored by pro-segregation Arkansas Senator William J. Fulbright.

The Sanders camp has wasted no time capitalizing on this development.

Bernie Sanders’ wife said Saturday that a recently emerged photo of the now-Vermont senator being arrested after protesting segregated housing in the early 1960s is proof of his advocacy for civil rights.

“I think his opponent is trying to cast him as not having much of a civil rights record,” Jane Sanders told CNN’s Fredricka Whitfield on “CNN Newsroom,” referring to Hillary Clinton. “And I think a picture is worth a thousand words.”

Here’s another image via the Chicago Tribune:

None of this is going to make conservatives suddenly support Bernie Sanders, but it shows he is more authentic than Hillary Clinton.

Hillary would not let herself be arrested for anybody’s civil rights. She’s send someone else out to get arrested, and then use that person as a prop to show how much she cares.

I hope she will be arrested over her emails or her sales of influence at State. But I’ll believe that will happen when I actually see it.

Bernie had a watch?

How ’bout that. I wonder who paid for it.

If being arrested gives one credibility, I think we should give Hilliary *lots* of credibility. Five to ten should be a good starting spot.

One might ask why someone HAD TO ASK Bernie if he was in that video, instead of him listing his long history of civil rights involvement to Hilary, including this arrest.

Or perhaps Bernie is further down the Alzheimer’s/Dementia Yellow Brick Road than we think . . .