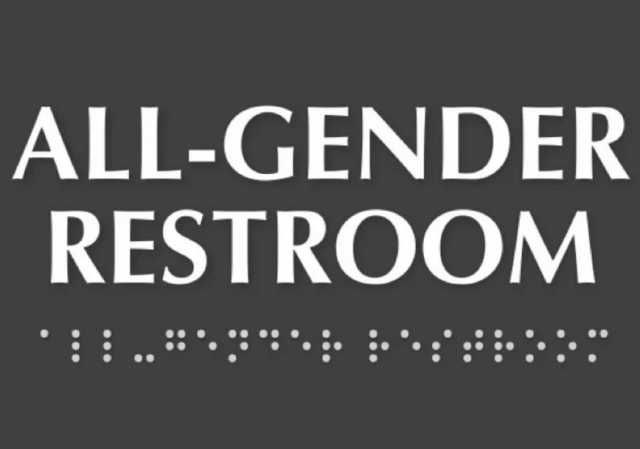 Between the anti-Israel activity on campus that has generated enormous media attention, and the protest against a feminist Professor who allegedly used improper transgender pronouns, there is plenty of turmoil on the Vassar College campus.

Now there is another point of conflict, a demand by students that all bathrooms be converted to “all-gender.”

This effort, however, is inadequate to a student group identifying as the Vassar Queer Health Initiative, which has opened a drive to compel that all bathrooms on campus be “all-gender.”

The effort was announced in Boilerplate magazine, Taking Vassar’s “LGBT Friendliness” To Task: The Case for All Gender Bathrooms:

The Vassar Queer Health Initiative (VQHI) is calling for all bathrooms on campus to be labeled “all-gender,” with a subtitle stating: “Anyone can use this restroom, regardless of gender identity and/or expression.” VQHI finds this demand to be reasonable in theory and simple in implementation.

VQHI is predicting administrative and alumni pushback on our demand. Cisgender women, often claim uncomfortability in all-gender bathroom situations. And at Vassar, most often these women are faculty, staff, or outside visitors. VQHI attributes cisgender women’s fear of transwomen in bathrooms to transmisogyny and not actual dangers to their safety.

Spokespeople from the Transgender Law Center and the American Civil Liberties union have reported that there is no evidence that transgender women have committed physical violence against cisgender women in single gender public bathrooms (Bianco, 2015). The Williams Institute ran a survey that instead demonstrated the violence that transgender people face while using public restrooms. Conducted in gendered public restrooms in metropolitan Washington D.C., the study examined the experiences of transgender residents in gender separated bathrooms. They found that 59% of the male-to-female participants and 75% of male-to-genderqueer participants were verbally harassed while using a gender dichotomized restroom (Herman, 2013).

As of present, Vassar chooses to cater to those who are uncomfortable with all gender restrooms, specifically Vassar College faculty and staff, while disregarding the transgender voices that report violence in gender separated spaces. We must ask: which women and non-men is Vassar College choosing to protect?…

Discriminatory policies of gender dichotomized bathrooms need to end, and they need to end now.

The statement indicates that until a resolution can be presented to the Vassar Student Union and the administration changes its policies, students will place “all-gender” signs over the current male and female bathroom signs:

VQHI is holding the Vassar administration responsible for making the structural changes students need to allow transgender and genderqueer students to prosper. A resolution to make all bathrooms on Vassar College’s campus “all-gender” will be presented to the Vassar Student Association. In the meantime, new all-gender bathroom signs will be hung over old existing signs. This is not vandalization. This is transgender students taking their security and health into their own hands.

Shortly after the initiative started, however, there appears to have been significant pushback requiring a slight scaling back of demands:

VQHI would like to complicate our call for all-gender bathrooms. While we wish to erode and subvert the gender binary, we also have to acknowledge the experiences and ontological realities of all those affected by patriarchial violence. So with that said, VQHI will remain persistent with taping over “Men’s” bathroom signs with “All Gender” signs, while leaving some “Women’s” bathroom signs remaining as they are.

I stand in solidarity with Vassar Queer Health Initiative’s campaign to make almost all restrooms on campus be “all-gender”, and open to anyone “regardless of gender identity and/or expression”. VQHI will leave some “Women’s” restrooms as we recognize the need to have spaces of privacy and safety from the male gaze.

The all-gender bathroom movement already has received the support of the Vassar Student Association.

It will be interesting to see how the administration handles the situation.

Perhaps the Pope would like to try one of these all-gender bathrooms and weigh in on the subject.

We used to joke about ‘signs of the apocalypse,’ but it’s no joke anymore.

As America swirls down the toilet.

A Gender Neutral Toilet, I hope.

Somebody is trying to find out how far the students and administration can be pushed, before they themselves throw the big, red, bs flag. This did not originate with students.

And people mocked Phyllis Schlafly for warning that equal rights would lead to unisex public toilets.

In the universe of transportation, our world is now riding the short bus.

How can people be so utterly stupid? How?

Wow! Is this how the so-called students spend their time?
One might think that at those prices they’d be studying, after all, doesn’t one go to college to eventually get a job?

I have attended a few colleges and never once did it occur to me that my mission was to destroy the place in every way I could. What was I thinking? That I was there to learn?

You attribute too narrow a vision to these monsters. Destroying college is just part of their project. The real target is all of western civilization.

They just need three different restrooms:
Men
Women
Everyone else

Which bathroom should Cousin Itt use? 😀

They tried that at one, and those who claimed neither male nor female did claim that in using such facilities they felt singled out and therefore persecuted.

They want the right to getting their jollies.

Is there like an explosion of birth defects or something. Is it the plastics? Polychlorinated Biphenyl? You know, the stuff that’s causing alligators in the Everglades to be born with teeny tiny testicles.

I suppose these all-gender bathrooms also have to be safe spaces some women don’t have to worry about men walking in.

They want single restrooms? Remove the doors and partitions.

“VQHI attributes cisgender women’s fear of transwomen in bathrooms to transmisogyny and not actual dangers to their safety.”
Sigh. No such thing. It’s because they can’t tell if it’s a harmless gender confused person, or a violent psychopath that doesn’t mind cross-dressing to get victims.

Talk about a real rape culture.

Perhaps they should revert to signage based on sex instead of “gender”, as sex can be determined by a mouth swab instead of the murky “identifies as du jour”…

Thank you! I am not a part of speech. I am a person. The correct word is “sex,” either male or female, and is a biologically-determined characteristic.

Don’t need a mouth swab, just look between your legs. If your toys dangle you go to the boys room, if they don’t you go to the girls room. How and who you play with with your toys is up to you.

Welcome to the jungle…

“Discriminatory policies of gender dichotomized bathrooms need to end, and they need to end now.”

Me Tarzan. You Tarzan. Me Jane. You Jane. Mi gender su gender.

The next gender blender…

“Discriminatory policies of gender dichotomized professors needs to end, and they need to end now. We demand gender neutral professors. AND, we demand an end to the onslaught of binary computer programming. We wish to erode and subvert the binary and completely demolish the bifurcation of yes and no thinking. No questions asked. Hear?.

These positions are not discriminatory but rather are necessary illusions in a real world where people other than me and my nondescript friends exist. Hear Holmes?.”

I am an alum, and Vassar is no longer a very good school. Williams, Wesleyan, Swarthmore all have Vassar whipped.

We live in a world where markets all over the world are tanking, terrorism is at a high, potential WWIII is brewing in Syria, our liberties and freedoms are being stripped from all Americans, America faces financial ruin deepening social unrest/division, our political structure is collapsing from mendacity, and these students can only think of how the most important issue ever is all gender bathrooms and using the correct pronouns? Is there any question as to how disconnected from reality these students are and is their any reason why no one wants to hire them? These students and those enabling them are nothing more than their own worst, highly-opinated enemies.

Forget simply hiring these brainwashed, wimpy, self-absorbed, ignorant fools – they will become the leaders of tomorrow . . .

Then logically they also demand the rejection of class diversity policies and rejection of constructed congruences advocated by “=”, The Supreme Court, and Obama, that have advanced institutional discrimination of politically unfavored individuals and groups.

All clumps of cells are created equal. So, abortion rites under reactive parenthood, and clinical cannibalism under Planned Parenthood, are also an illogical progression that need to end.

That said, women… I mean, womb banks, and men… sperm depositors, will still be drafted to normalize dysfunctional couples and sterile couplets, and to serve the abortion and Planning industries.

The Matriarch will not like this. She established a separation of male and female with a specific purpose and intent. The people playing god are characteristically short-sighted.

If I were a Vassar student (hah) with the political beliefs I have, I would delight in pulling these signs down — witnessed or not.

Better yet: if they can put up signs, so can I. The real question is, how clever could I be? The goal would be to put up bathroom signs that disembowel (as it were) the position of the VQHI while at first glance looking like the kind of sign they themselves would post.

Oh, the fun I could have…

As in the picture, I have occasionally seen public restrooms with Braille transliteration. Question: why? How would an unaccompanied blind person know where to start?

Probably a requirement of the Americans with Disabilities Act. Some pretty dumb things in there.

I guess these students are to STUPID to see that all this does is opens the door for perverts to spy on women. One day, someone will be sneaking a camera in and they’ll get the idea, this was an IDIOTIC idea.

I guess if they really have to go somewhere build them a gender free restroom, but I assure you, I’ll be going to the men’s room. I wonder how many rapes (cameras, whatever) will occur now that they’re wanting to allow perverts in the women’s room? Do none of you care about the women in your lives? YOU ARE OPENING THE DOOR to them being abused, attacked or worse. BTW, nothing wrong with being normal.

On the other hand, all of the toilets in my house are unisex, as was the one at my Dad’s shop.

(P.S. When did ‘transgender’ replace ‘unisex’?)

My morning glory needs a safe space…from womanly fart noises emanating from the stall next to me. Seriously, what kind of people want the sanctity of their morning rituals invaded by the opposite sex?

Doesn’t really bother me if women have to use male style urinals but it surprises me that they haven’t raised hell over it. /s

I’ve been in many small, elite commercial venues that had unisex bathrooms. But all those were meant to be single occupancy. Indeed, they were basically a halfbath similar to those found near the backdoor or the kitchen/family room in many modern homes.

With what Vassar charges for tuition, they should be able to remodel all their public restrooms into rows of self contained unisex half baths. That wall the only issue is occupied v. vacant. Or perhaps if the pointers out the seat back down for the setters.

I don’t think that’s the answer they want. What they want is to force women to share bathrooms with men.

Yes, but as with ALL things Leftist, their rallying cry is, “Why should a few be slightly inconvenienced for the great benefit of millions?” After all, they HATE the “millions”.