Will become Dean of Architecture at the University of Pennsylvania 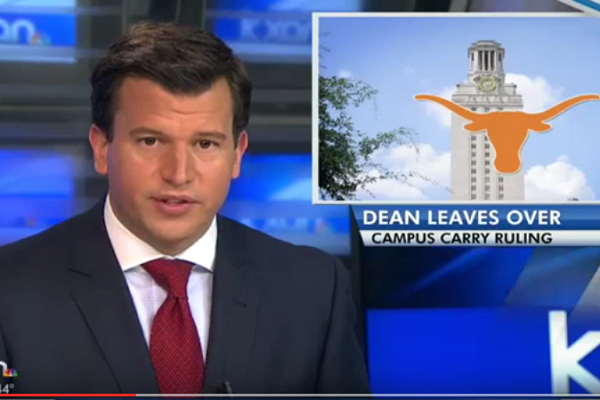 A University of Texas (UT) Architecture dean has declared that the new law is the reason for his decision to leave UT.

The University of Texas at Austin’s longtime architecture dean announced on Thursday he is leaving, saying the state’s new campus carry law played a major role in pushing him out.

. . . . The departure is a blow for UT-Austin. Its architecture school has consistently ranked among the best in the nation under Steiner. This year, Architectural Record ranked its undergraduate program seventh.

Interestingly, this dean, Fritz Steiner, will be leaving UT for the University of Pennsylvania where he will serve as Architecture dean.

Fritz Steiner will take over as dean of University of Pennsylvania School of Design on July 1. The job offers an opportunity to join the Ivy League and return to the school where he earned three postgraduate degrees. But Steiner said he has turned down similar opportunities in the past, and probably would have done the same if people weren’t going to be allowed to carry guns in classrooms and other places on the UT-Austin campus next school year.

“I would have never applied for another job if not for campus carry,” he said in an interview. “I felt that I was going to be responsible for managing a law I didn’t believe in.”

Students for Concealed Carry were quick to respond to Steiner’s departure announcement.

The group Students for Concealed Carry acknowledged in a statement that worries about guns on campus are taking “a real, measurable toll on the state’s institutions of higher education.” But people spreading unreasonable fears about the law are at fault, not the law itself, the group said.

Campus carry became law last year, but doesn’t go into effect until Aug. 1. It will allow people with concealed handgun licenses to carry their guns into campus buildings. Each university is allowed to create some limited “gun-free zones,” but state officials have said those zones can’t include classrooms.

Poor Fritzy. Mean, nasty CC devotees, forcing him to move across country just so he can feel safe. ☺☺

Yeah, right–wait until you have another job, then leave UT and blame campus carry. Typical effete academic pussy–he belongs in the Ivy League. He’ll be the first to put an unarmed student in the line of a terrorist’s fire so that he can beat a hasty retreat.

This is awesome news!

… if only we had known is that all it takes is concealed carry on campus.

… so we can clear them out and replace them with some common-sense professors from all over the ideological spectrum – so long as they believe in the Bill of Rights, especially the 1st and 2nd amendment.

Drive them out. We can create a nice safe rubber-padded play spaces in an ayslum, I mean, we can find them a small set of universities where we tolerate continued lunacy like gun-free zones and speech codes.

Especially if the speech codes include not complaining about their new lot in life.

A real genius! Have you ever been to Penn? It is in one of the most dangerous areas of Philadelphia, 2nd only to Temple University in North Philly. He will wish he was armed when he goes to work there!

Seventh? That’s the best this guy could do?

Maybe by getting rid of this dead weight, they can move up next year.

By blaming campus carry, the left wing media makes him a star. If he said he was to be paid more (I do not know the salary difference), he would not be in the news.

I suggest this is simply exploitation by both the dean (star status) and the MSM to try to damage CC and the 2nd Amendment. They never quit you know.

As of 12/31/15, Texas had 937,419 active concealed handgun license holders. http://www.txdps.state.tx.us/rsd/chl/reports/ActLicAndInstr/ActiveLicandInstr2015.pdf

That means 3.4% of the state population has a CHL.

For 2014, the CHL holder percentage of total convictions in Texas was 0.2341%. http://www.txdps.state.tx.us/RSD/CHL/Reports/ConvictionRatesReport2014.pdf

Assuming similar for 2015, that means that CHL holders are far more law abiding than the general population.

Of the kinds of things a snowflake professor might be worried about, e.g., terroristic threats against a public servant, 0% were by CHL holders.

Conclusion: The UT administrators against lawfully concealed handguns in the classroom are a bunch of weenies who don’t want to be confused by the facts. That’s a helluva indictment against the academy, but really not much of a surprise.

Good riddance. Can we get rid of more of these anti-Second Amendment losers the same way? Most of them don’t believe in freedom of speech either

The departure is a blow for UT-Austin. Its architecture school has consistently ranked among the best in the nation under Steiner. This year, Architectural Record ranked its undergraduate program seventh.

Has anyone proved that the rankings are fair and objective? What is used to rank them? Who pays for them to be ranked? Who ranks them?

The rank already dropped while he was there, they came in 7th last year. But it was probably the trauma of him knowing that the evil gun toters were coming.

“What makes anyone think that Steiner had anything to do with the school’s rank?”
Steiner has been the dean of the school since 2001. The dean is generally considered to be an important factor in the quality of the school.

“Has anyone proved that the rankings are fair and objective?”
The ranking of architecture schools is done by http://www.di.net. While small differences and movements in rankings aren’t significant, groupings such as top 10, second ten, etc., are. UT Architecture is top 10 and has been for a while.

I remain unimpressed. Here’s why. When I was in college, I found that the last half of the most advanced book in circuits was incorrect. I took it to a friend who was a math genius (I could give you some real stories about him). He paged back and forth for a while and found the error. I showed it to the professor, who said it didn’t matter, because all the top school in the nation used that same book. The guy who was the best at this type of design, Bob Widlar (at one time designed 80% of all analog circuits in production), never graduated from college. I think the rankings mean nothing. They might mean that someone is making money from them, if that means anything.

Don’t let the door hit ‘ya where the good Lord split ‘ya. I sincerely hope the good professor does not get mugged at his new job, because as a deeply caring and compassionate person, I would be torn between laughter and sadness.

Good riddance. Would think you were going to VA Tech, since Gun Free Zone on their campus worked so well. Don’t remember if any one from Architecture school was shot by UT sniper in 1966 but I know Huffman, my B school prof was – got him tenure…

This clown reminds me of actor Jude Law, who recently visited a migrant camp in Calais that holds illegal aliens who crashed into the country. After advocating for the aliens and their ‘plight, they mugged him!

“I felt that I was going to be responsible for managing a law I didn’t believe in.”

This has to be one of the most asinine comments I have ever heard. What additional burden did this law put on this person? Answer: None. He has the same expectation as a snot nosed freshman as far as this law goes, if you see someone with a gun in an area where they aren’t supposed to be then alert campus security. Or if you see someone not properly concealing their gun (which would probably never happen) then call campus security (or be a reasonable adult and tell them; “Hey, your piece is showing. Why don’t you go to the Rest Room and fix that.”). I let a guy in line at Walmart know that his gun was showing, since I would want someone to tell me. Turns out he was an off duty cop and didn’t have to worry about it, but he did give me props for saying something.

he is a candy ass. Did it make the news in late 1960’s when the SDS was blowing up buildings on campi in Chicago, Michigan, etc? A grad student of MJS Dewar (big time chem prof) was blown up and Dewars equipment was blown to smithereens. MJS Dewar migrated to Univ of Texas where we were more civilized. Did the press get their panties in a wad about that?

and ditto Richard Bernstein (famous physicist), migrated at the same time. In fact, it may have been his grad student who was killed. Bernstein was on my doctoral committee.

Welcome to Pennsylvania. Btw PA is number 2 in active carry permits in the nation according to http://www.politifact.com/florida/statements/2015/apr/15/jeb-bush/which-state-most-gun-permits/. Lock and load dean, lock and load.

Interesting that he chose to move to a state that has one of the highest per capita rates of concealed carry licenses. (known as a License to Carry Firearms which covers all carry in vehicles, open carry, carrying on state property except certain areas deemed sensitive; courts and mental hospitals,and concealed carry.)

Thus he’s more likely to be amongst people who if not carrying, can carry a firearm in greater numbers than where he was in Texas.