Even though the law won. 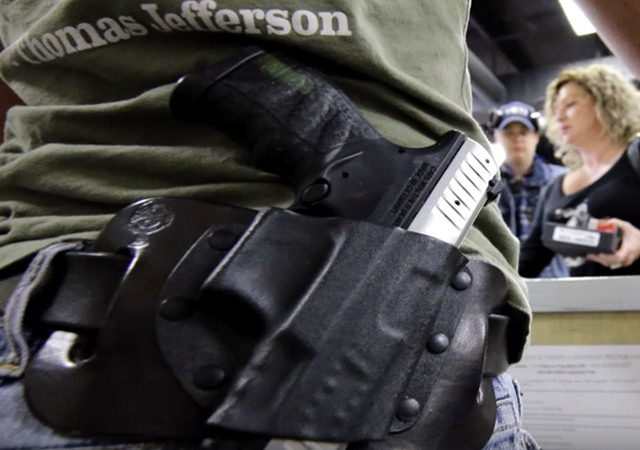 Have you noticed that when liberals win it’s the “law of the land” and when liberals lose it’s an injustice which needs to be corrected?

University of Texas-Austin President Gregory Fenves declared this week that he’ll comply with the law, but claimed a loophole allows him to ban firearms in dormitories.

“I do not believe handguns belong on a university campus, so this decision has been the greatest challenge of my presidency to date,” Fenves wrote in a Feb. 17 letter to students, faculty and staff. “However, as president, I have an obligation to uphold the law.”

The law authorizes those with permits “to carry a concealed handgun while on the campus of a public, private, or independent institution of higher education.” But Fenves believes the law allows him to impose a dormitory ban.

That interpretation is not likely to sit well with state Attorney General Ken Paxton, who in December said that a ban on guns in dorms would be flouting the law.

“If an institution placed a prohibition on handguns in the institution’s residential facilities, however, it would effectively prohibit license holders in those facilities from carrying concealed handguns on campus, in violation of S.B. 11,” Paxton wrote in a letter to lawmakers. “This is because ‘rules, regulations, or other provisions concerning the storage of handguns in dormitories’ presupposes their presence in dormitories.”

Here’s a video report about the law from Wochit News:

Newsweek reports that there will be lawsuits:

University of Texas at Austin Could Face Lawsuits Over Campus Carry

There are also restrictions on people carrying guns while working with minors. And while carrying a semi-automatic handgun, carriers cannot have a round of ammunition in the chamber.

The policies do not generally prohibit guns in classrooms, a point for which faculty members had voiced concern. A working group had recommended against such a sweeping prohibition.

“Under the law, I cannot adopt a policy that has the general effect of excluding licensed concealed handguns from campus. I agree with the working group that a classroom exclusion would have this effect,” Fenves wrote in the letter.

“It’s a case where he wasn’t willing to take the political risk of going farther and acting on his convictions and for that we’re disappointed,” says Max Snodderly, a member of the group Gun Free UT and a neuroscience professor at UT Austin.

Why must liberals stand in the way of progress?

“Why must liberals stand in the way of progress?”

Because the fools are clueless and arrogant — a bad combination.

“I do not believe handguns belong on a university campus, so this decision has been the greatest challenge of my presidency to date,” Fenves wrote…

1) The criminals are already armed. This is a simple concept that even a liberal should be able to grasp.

2) What this arrogant man believes is should not subvert or overrule the law.

This is a prime example why a liberal should never have any authority over any other person. Their “beliefs” get innocent people killed (see Baltimore, Chicago, etc.).

Yeeeup. The fool just sent an engraved invitation to come to a UT dorm for the next mass killing.

I hope there are some students who will practice a little “civil disobedience” around this, and quietly provide themselves firearms.

Well, OK, I will report…armed.

We all know the left supports criminals, because most of them are criminals. What better way to make sure their colleages are safe in their places of employment? That is right make sure their victims are unarmed.

Your personal feelings are not important to anyone but yourself. If you are having a difficult time dealing with the concept of people being able to defend their own lives, I suggest you make an appointment with the therapist you no doubt already visit and find a way to work through YOUR problem.

Your mental issues are not a valid reason to restrict the rights of others.

Or better yet, resign and seek employment in a state that agrees with your views.

OTOH think of Melissa Click with a gun. OK, you can stop now.

Funny….. I have the same attitude about title IX but until the law changes, it is the law.

Open Carry isn’t allowed on the campus. So what does the video show? Nothing but open carry.

Ken Paxton is gonna have a field day kicking this progressive presidents butt.

The science of being offended is not fact based.

Be very careful, if you carry legally on campus. Conceal carefully. Be prepared for disarming attacks by The Enemy, and attempts to provoke you into violence. Campus is crawling with Libturd vermin.

Since liberals are really cowards at heart the first attacks will be what I call mico-swatting.

Step 2: Call police and make some bull crap accusation about the person being threatening with their gun.

Step 3: As they should police respond and the person carrying has to deal with police.

Sure it is probably no more than in inconvenience, but it could also lead to a deadly misunderstanding.

“I do not believe handguns belong on a university campus, so this decision has been the greatest challenge of my presidency to date,” Fenves wrote…

Okay, I’ll bite: What exactly is the challenge here? All he has to do is obey the law. He has presumably been obeying laws all his life, so that shouldn’t be an issue. I’d be willing to wager he has even been obeying laws with which he didn’t particularly agree, as most of us do. Why then is this such a challenge?

In my opinion the challenge has been trying to wrap his mind around the concept that there are people – I’m tempted to say a majority of people – who believe that there is indeed an inalienable right to personal self defense. That idea seems to be anathema to progressives as do all ideas that revolve around personal responsibility. Being personally irresponsible they project that onto others, leading them to believe that a bad grade would indeed lead to a shooting in class; it is what they fear they themselves might do were they armed! I recommend the following as an insight into this mindset: