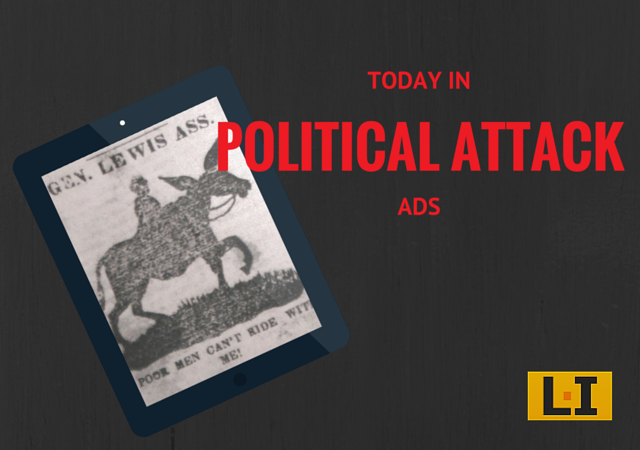 We’re pleased to present what will be a reoccurring election feature here at Legal Insurrection — Today in Political Attack Ads. As long as the mud is flying, you’ll find it here.

Political attack ads are as old and colorful as America. To our cultural credit, negative ads are far less personal these days. “John Adams is a hideous hermaphroditicly character with neither the force or firmness of a man, nor the gentleness and sensibility of a woman,” claimed Thomas Jefferson (one of my personal favorites).

“Do you want to see your dwelling in flames?! Female chastity violated?! Children writhing on a pike!! Well that’s what will happen if you vote for Thomas Jefferson!” warned John Adams.

Back in 2010, Reason put together a video chronicling some of the best campaign rhetoric from the election of 1800.

Which leads us to our first edition of: Today in Political Attack Ads

“What Kind of Man”

Trump’s ad calling Cruz, “the worst kind of Washington insider who just can’t be trusted,” was running in South Carolina…

Until Trump decided to pull the ads and focus on positive messaging:

WASHINGTON– GOP front-runner Donald Trump has pulled a Ted Cruz attack ad from the South Carolina air waves, as his campaign shift to an all positive strategy, first reported by The Wall Street Journal.

This makes Cruz’s second attack on Trump’s penchant for eminent domain this week. The ad hits Trump’s, “pattern of sleaze.”

What I'll enjoy most about this ad is hearing Cruz say he still "likes & admires Donald Trump" on the weekend shows: https://t.co/SyUnGMnfCN

I’m not sure perpetuating mental health stigmas and mocking group therapy in order to score points amnesty points is the best way to make your point, but here we are.

In the ad, the female in question says, “Maybe you should vote for more than just a pretty face next time.”

And the Cruz campaign responded:

Cruz spox @catblackfrazier: "Had the campaign known of her full filmography, we obviously would not have let her appear in the ad."

[After posting, the campaign removed the ad from it’s YouTube channel. The above link is the same ad from a different channel.]

“Ted Cruz’s talk is cheap,” said the PAC ad, which goes on to compare Cruz to Bernie Sanders.

J.Q. Adams vs Andrew Jackson, 1824 & 1828, were also nasty enough to make today’s voters wince. Negative campaigning is part of the process, and it works no matter how much voters claim not to like it.

Gotta laugh at the whininess of the Trumpkins, since his first response to any criticism is throwing out schoolyard insults.

Yeah, and don’t pay any attention to that guy Rubio behind the curtain 😉

I wonder how many people know American Future Fund is a Marco Rubio supporting pac or their history of ties to the ethanol lobby.

Got proof of the Rubio supporting allegation? Don’t seem well suited since they support legalization of pot and ‘anti-war’.
https://en.wikipedia.org/wiki/American_Future_Fund

Your dwelling in flames … female chastity violated …pfffttt, kid stuff. If paranoia is the name of the game, Adams should have pointed out that a vote for Thomas Jefferson was really a vote for Aaron Burr. Yikes! That at least would have had the virtue of being true. (Of course, so was his claim about that female chastity stuff.)

I think “we have been making fun of group therapy” since the days of the 1st Bob Newhart Show on CBS.

I viewed no stigmatization of mental illness in the light attack ad from the Cruz Crew…FYI – I am a Cruz supporter.

Who hasn’t said “My name is Milwaukee and I have a problem?” Did you?

After you talked about it, didn’t someone, anyone, ask, “How does that make you feel?”

If not, you need to get out more. Have a few drinks.

…says the person who was an insider of Bill, Hillary, Harry Reid and Charles Rangel’s circle of crony-cap donors.

I first heard Marco Rubio at the first Red State gathering when he was running for the Senate against Charlie Crist. I was wowed by Rubio, his rhetoric was amazing; I shook his hand and said that he was so amazing that one day he could be president.

Then he won and went to Washington, DC and became the opposite of his amazing rhetoric. Rubio betrayed my trust that he was a candidate I could believe had integrity. He could have been a contender had he had the wherewithal to remain strong in his convictions.

After self-analyzing therapy I have come to the conclusion that my problem was that I trusted in soaring rhetoric rather that the actions taken.

Rubio is the reason why I do not believe in what Trump says; both say all the sweet things I want to hear yet their actions show me otherwise.

None are perfect, we are all fallen however I have been cured of the desire to be bamboozled by sweet talking smooth operators who think that by their mere presence I am going to lay down and take their abuse.

This is so unfair. Amy was just getting her life together, turning a corner, even registering at the community college. She auditioned for the next production in the theatre department. She wants to be a star on Broadway. To have all that snatched away because of a youthful indiscretion or two is outrageous. I thought America was a land of second chances!!!!