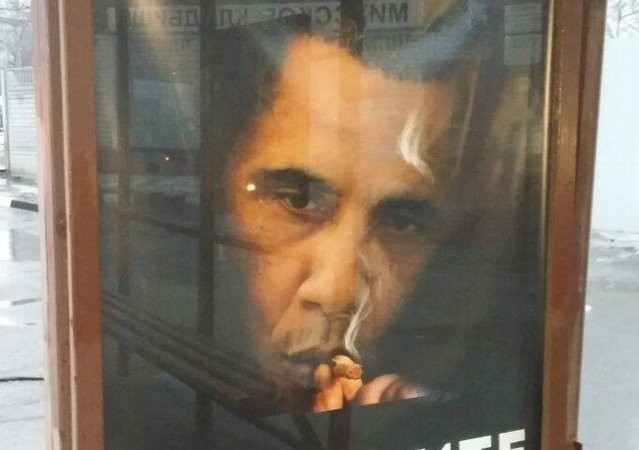 Last year there was some speculation that Obama was smoking again–after having quit, he says, because his wife scared him into it.   Whether he is still smoking or not, a Russian advertiser has decided to use the American president’s smoking habit in his or her latest anti-smoking ad campaign. 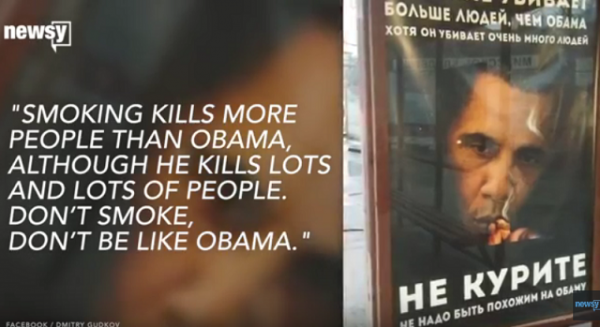 An anti-smoking ad has popped up in Russia featuring an image of President Obama and warning “smoking kills more people than Obama.”

. . . .  “Smoking kills more people than Obama, although he kills lots and lots of people,” the ad states, depicting Obama with a cigarette. “Don’t smoke, don’t be like Obama.”

A spokesman responsible for the mayor’s department on advertisements told Russia radio RSN the advertisement would be removed, according to Newsweek.

BBC reports that the ad was first posted to Facebook by a Russian MP who is critical of the Kremlin:  “Dmitry Gudkov, an MP and critic of the Kremlin, posted the image saying: ‘I am disgusted and ashamed of what appears on the streets of the Russian capital’.”
Watch the report:

According to the BBC report, this is not the first time that Obama has been featured in negative Russian advertisements.

It is not the first time the US president has been targeted in negative ads, amid rising US-Russia tensions.

According to the Moscow Times, a pro-Kremlin art group hung a banner of President Obama with the caption “killer” opposite the US embassy in Moscow.

And in December a major Russian supermarket chain apologised after selling a chopping board with the US president pictured as a chimpanzee.

Seems like good advice, whether appropriate for a commercial or not … I’m not talking about smoking, but the other advice: “Don’t be like Obama”

Applies to an awful lot of things he does. And if we leave all his policies in place and keep going this direction, those policies will kill a lot more people.

Dunno about the Russians, but the Europeans think our anti-smoking crusade is overkill. I have spoken to medical researchers about this, they have said that 1) Americans always ask them about this, and 2) smoking is a risk factor in lung cancer and emphysema, but only a risk factor.

So, part of the subtext of this ad is that Obama is a flaming hypocrite for smoking, in light of the US government’s notorious campaign to end that habit.*

*I do not know whether they are very aware that the US government placed cigarettes in military rations for years, and that Hollywood pushed smoking as the “cool” thing to do, with the end result that our government and Hollywood encouraged the spread of this habit in the first place.

A Russian with a sense of humor? Who knew?

Looks more like he’s smoking a roach, to me.

He is a roach.

Back in the late 90’s I was acquainted with a Chinese government employee. He had a PhD from some ivy league college (can’t remember which one) and had an office in the same building where I worked. His job for the Chinese government was to purchase high tech equipment in San Diego. He made no bones about it, he worked for the communist government.

We used to meet outside where we both took smoke breaks (yeah… but I quit years ago). We had a lot of interesting discussions. When California passed a law making it illegal to smoke in bars he laughed and told me that the Chinese communist government would never even consider passing such a law and that Americans were not really as free as we liked to think we were.

Obama-the perfect example of what not to do.

Hell that could be applied to his whole damn presidency.

Ironic. That poster of Obama smoking a cigarette is in a bus station. Unlike the “I have a blue pencil box” sentence learned by a student of the French language, one of the first sentences learned in a particular Russian language course is “Khooligani kuryat na trollayboosakh” – “Hooligans smoke on the trolleybuses.”