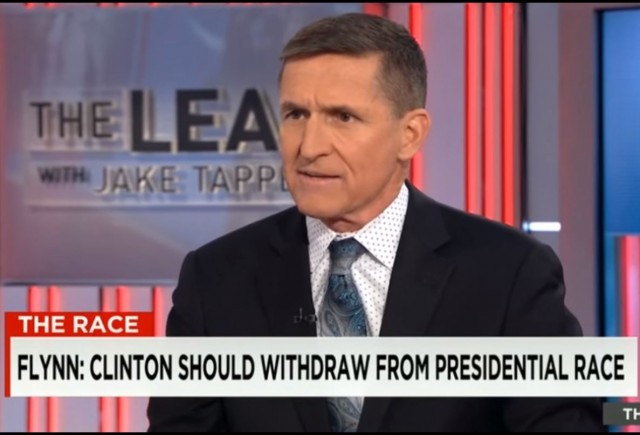 As the scandal surrounding her private email server and her apparent mishandling of classified information and FBI suspicion involving her possible public corruption mount, Hillary Clinton bounds joyfully along the Democrat presidential primary trail seemingly without a care in the world.

President Barack Obama’s former top military intelligence official said Hillary Clinton should pull out of the presidential race while the FBI investigate her use of a private email server for official government communication while secretary of state.

Lt. Gen. Michael Flynn, the retired chief of the Defense Intelligence Agency, made the call in an interview with Jake Tapper on “The Lead.”

“If it were me, I would have been out the door and probably in jail,” said Flynn, who decried what he said was a “lack of accountability, frankly, in a person who should have been much more responsible in her actions as the secretary of state of the United States of America.”

Her campaign spokesman predictably pooh-poohed the general’s suggestion that Clinton drop out.

“In both of those two cases, you now have the same agency looking at their emails, personal emails, and saying that there is information that in retrospect they think should be treated as classified,” Fallon said. “The exact same situation playing out in the two previous secretaries before Secretary Clinton. So I think that tells you everything about the relative seriousness of this.”

Clearly, the “exact same situation” has never happened with any other Secretary of State.  Neither Colin Powell nor Condoleezza Rice had a private—and potentially insecure—email server stashed in someone’s bathroom.

Hillary will not withdraw from the race because of the FBI investigations, or she would have done so already.  No, this is her last shot at the top job, and she won’t willingly walk away from it.

wouldn’t it be great if some feds walked up and arrested her at a public event, and perp walked her off stage?

talk about must see TV!

too bad it’s not likely to happen. 🙁

Is it not beyond belief that Hillary wanted China, Russia, and others to access the classified emails? This is her way of supporting Barack Obama’s goal of destroying our country.

never attribute to malice what can adequately be explained by stupidity.

Shrillery is both arrogant & ignorant, and the only thing she’s ever supported is her personal quest for money & power.

i’m convinced her reason for the private serve was to avoid FOIA searches on her actions as SecState, and how they related to “donations” to her charity…

i’m sure issues of national security never crossed her mind, because it’s obvious she doesn’t give a 5hit about it.

I would guess you’re right about Hillary: she just didn’t care. About Obama, I might think differently.

Right after Election Day 2008, I thought: Oh great. The spiritual offspring of the Weather Underground, mentored by a card-carrying Communist, and with a deep emotional allegiance to the ummah — someone who wouldn’t pass a ground-level background check, and he now gets to see all of our top-secret information. What’s to worry about?

now pass me another pitcher of martinis.

There are no similar FBI probes. The DoS is part of the Clinton crime syndicate, particularly that Undersecretary of State for Management Patrick Kennedy scumball. So the DoS retroactively classified certain emails to, I believe, Confidential. Precisely to give the Clinton campaign talking points like this one.

The next talking point will be, “see, the USG does overclassify information.” Because, guess what? The sewer rats at State did precisely that, deliberately.

Another factor is that it’s now become clear that a lot of people at State have lied to federal justices in several FOIA cases about when they first learned about Hillary Clinton’s private email server and that they knew she used it exclusively for all official business.

I don’t know what the strategy is here. Maybe there is no strategy as they never expected to be exposed. It reminds me of what Tacitus said about the Briton’s mindless, pointless savagery during Boudicca’s revolt in 60 AD. They were, he said, like condemned men taking revenge for their upcoming execution.

I thought I should provide a link. You can smell the stink on this story even over the internet.

“…Thursday’s revelation about the two secretaries of state under former President George W. Bush gave her supporters an opportunity to claim the Democratic presidential candidate was being singled out over the practice.

How very convenient, don’t you think? The DoS at the time was whining to a federal judge that they couldn’t produce the required number of documents on time because they were surprised to discover it snows in Washington D.C. in January. So they needed an extra month. Essentially, they were understaffed, and a three day delay meant what few personnel they had available to throw at the task meant despite working their fingers to the bone would not be able to do the job.

That, and also a week or so before the deadline they learned they had “forgot” to send 7,000 of Hillary Clinton’s emails to the agencies that had originally classified the information for review.

And yet, and yet, while they were conducting a review of Hillary Clinton’s emails because a judge ordered them to, the DoS decides to conduct an entirely unnecessary review of 5 previous Secretaries of State’s emails. Which would obviously require 5 times the resources. Resources that quite obviously been devoted to meeting the court order had they not been diverted to the entirely unnecessary task.

Why would they do that? So the Clinton News Network (and other components of the Democratic Media Complex) could triumphantly report, “Thursday’s revelation about the two secretaries of state under former President George W. Bush gave her supporters an opportunity to claim the Democratic presidential candidate was being singled out over the practice.”

As far was we know Hillary told them to provide her with some cover.

As far as any violation of the Espionage Act and other relevant federal statutes regarding converting official records go, these incidents are not remotely comparable.

These emails weren’t solicited by anyone, they never left the government system, nobody so much as kept a paper copy in their personal possession in violation of their sworn declaration that they had turned over everything, I could go on.

The bottom line is that this is like comparing apples to lug nuts. It is simply impossible for Colin Powell and Condoleeza Rice’s aide (Rice never used email) to have violated all the laws Hillary Clinton violated because, her server was in the basement of her home.

That’s assuming that State Department’s assessment of the classification levels of these emails is correct. Because if it is, that’s an indictment of their IT security procedures. If they’re only discovering the fact these classified emails were on the unclas government system 12 and 8 years, respectively, since these two walked out door for the last time.

But you’d have to be a fool to trust State’s assessment given how their initial defense of Clinton, that they disputed the information Clinton had received really wasn’t as classified as NSA, CIA, and NGIA said it was, MEANT that they weren’t going to follow the law anyway.

Hillary Clinton as Secretary of State was an original Classifying Authority. I’m not giving away any secrets that the first step an OCA must go through when deciding if new information must be classified is, has another OCA already classified the information? If so, your job is done. Moreover, if it’s already classified then you must protect the information exactly at the level it’s marked. There is no such thing as an “inter-agency” dispute as Clinton and the DoS would like you to believe. As in, you look at the information and decide the CIA has overclassified it and it’s really not classified at all. So summarize it on your personal Blackberry and hit send from your personal gmail account to Hillary’s @clintonmail.com account.

That’s not an “inter-agency dispute.” That’s violating the Espionage Act.

Everybody here has been lying from the start. Like this Fallon weasel. He’s saying there’s an FBI probe. No, it’s entirely a DoS dirty trick. Clearly the DoS is coordinating with the Clinton campaign, and the WH had to know. Which doesn’t bode well for a DoJ indictment. But they’re committing more crimes in plain sight in order to cover-up Hillary Clinton’s already enormous, clear criminality. It’s unbelievable.

Powell and Rice’s staff members aren’t running for president while denying they did anything wrong. That’s difference enough. Can you imagine the howls that would be emitted by the Left if a Republican candidate for the party’s presidential nomination were accused of the same things? No, you can’t, because the merest whiff of such impropriety would result in the withdrawal of such a candidate’s name from the race – either on his or her own volition, or upon receiving pressure from the party. Where is this pressure on Hillary? It doesn’t exist.