From the producer of Obama Girl video. 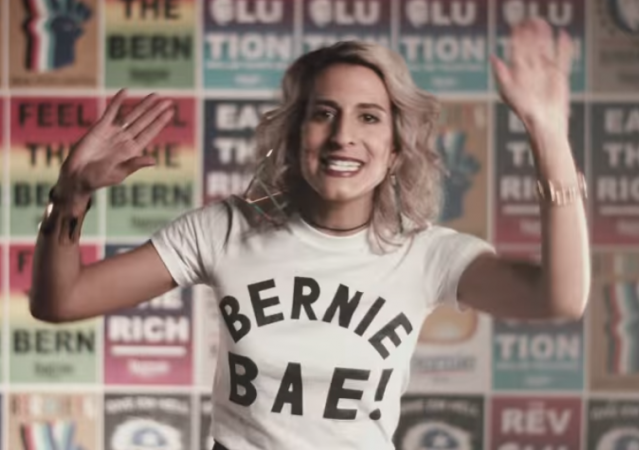 I don’t know that this comes close to the various Obama anthems from 2008, but it’s a start.

There’s a new video anthem for Bernie Sanders, produced by the woman who produced the viral Obama Girl video. The anthem title is “Bernie Bae” (Bae is slang for Before Anyone Else).

The woman who brought us the mega-viral hit “Crush On Obama” is back with another political pop song just begging to go viral. This one is about Bernie Sanders. It’s called “Bernie Bae.”

The production values in this music video are much higher this time around—and we have to admit, the song is quite catchy.

The song is all about the feelings of excitement and idealism Sanders is inspiring in so many young people: “I was feeling so hopeless/ And so cynical/ Now you’ve got me focused/ Bernie you’re a miracle.”

The key phrase repeated over and over is “Talk Bernie to Me.”

My favorite line: “You’re much more than a human Birkenstock.” (I’m not so sure about that.)

Liberal America will never get over its first true love.

Ah, the bump and grind of prison inmates in the gulag.

“Talk Bernie to me”…and I’ll let you have another ration.

What a breakthrough! Neither L’Internationale nor the Horst-Wessel-Lied managed to work in even an oblique reference to Birkenstocks.

Why do you hate us, Professor?

Couldn’t help but thinking of the wacko-socialist when I heard Blue Oyster Cult’s “Burning for You” the other day.

So many funny things could be done with a “crush on Trump” video. But would the theme be: “He’s risking everything to save the country because he loves America soooo much and he only cares about the people and he always, always tells the truth (unlike politicians)”?

Or would it be: “Our representatives folded, so now we’re going to blow the whole thing up”?

I just read another expression of the “Now we are going to blow the whole thing up,” in those very words, from a Trump fan, who seems to mean blowing up Congress and just going with a full-out dictator. Or else he wasn’t even thinking about what he really means, which is typical of the breed.

So is Trump a virtually messianic figure who will love and heal the nation with the purest devotion and unmatched wisdom? Or just the wrecking ball that he appears to be?

Maybe they can just go with an old classic like “Tomorrow Belongs To Me”.