You too, can watch your grandparents duke it out on live TV 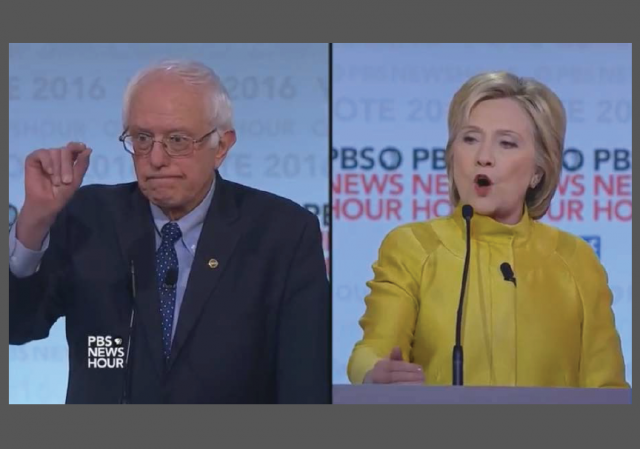 Welcome to our live debate coverage! Watch the debate live:

[debate over, clips below]

.@BernieSanders "One of us ran against @BarackObama, I was not that candidate" #FeelTheBern #DemDebate

.@BernieSanders: We should not let "the Trumps of the world divide us" https://t.co/NoOSP5ydnk #DemDebate https://t.co/UVVEqxlPXS

.@HillaryClinton calls out @realDonaldTrump for "stirring up the demagoguery against American Muslims” #DemDebate https://t.co/YcnbHFnRyg

I’d rather watch my grandparents have sex, thankyouverymuch.

I’d rather watch paint dry, or grass grow, or Lawrence Welk reruns. And a root canal would be less painful to endure too.

Hey watching Lawrence Welk can be quite entertaining.
For example:
https://www.youtube.com/watch?v=t8tdmaEhMHE

Your byline was perfect!

Sorry, I should have said Lead In”, not “Byline”. That’s what I get for drive-by posting.

Look! In that picture, Hellary is making the T-rump Hooting Monkey mouth…!!!

And she is yellow, too!

The Pander Express is running swiftly at this debate between Bernie and Hilly. They have pandered to every stereotypical group and promised everything imaginable. It is between a joke and an absurdity.

You don’t know what that is, do you.

That was where a nationalist Collectivist with a cult following WOWED them.

Before you and the other ignorami here continue parrotting a Nazi meme against a man with Jewish grandchildren, you might want to consider the liberal, anti-Republican, “diversity” yammering, anti-Israel, open borders, Islamapologiac set that planted it in the media.

But, you stupid, lying cultist, nobody has to take this to the point of IDENTITY with Nazis.

The point is that Der Donald is a nationalist Collectivist with a cult following.

The details of his positions don’t matter. Moron.

Dude, you are SO confused. But there’s no use arguing with you. You are gone.

That picture looks like he forgot how to give a “Monica” and she is showing him how.

Good grief! Did they put on Hillarys makeup with a paving machine?

And what’s with the vinyl trenchcoat? She plan on flashing Bernie and making him stroke out?

The only thing scarier than a nekkid Hillary is the thought of Bernie getting elected.