35 delegates up for grabs 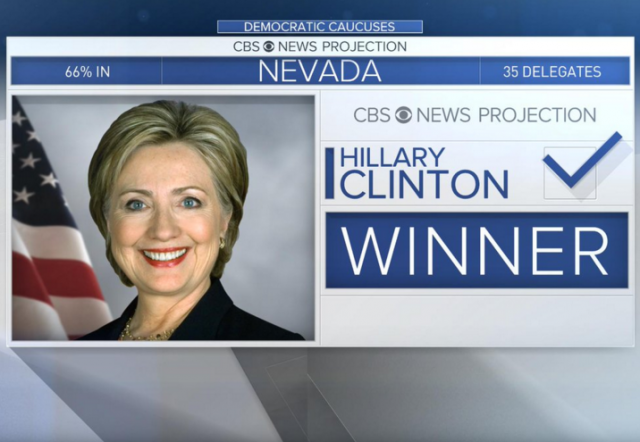 And there it is, NBC News projects Hillary Clinton the winner of the #Nevada Caucus

Thank you to our brothers & sisters in the labor movement for bringing Nevada home.

Big Labor power is what it was all about #FeelTheBern #Nevadacaucus https://t.co/D6LUtfQH2L

Up for grabs, 35 delegates. Currently, Hillary Clinton has 483 delegates and Bernie Sanders has 55.

So how many of the 8 Nevada superdelegates has Hillary bought off? – all of them, I assume. When will democrats notice that their primary vote really doesn’t count?

Can’t say I am surprised. In the modern Democrat Party identity politics is everything. Sanders is (1) white (2) male (3) straight (4) Jewish. In the eyes of many Democrats (a majority, I believe) that makes him Hitler x 4.

Bernie supporters are said to have chanted “English only!” What’s that about?

Once again, Clinton under-performs. Clinton should be running away with the popular vote, and instead Sen. Sanders comes up with only a 5.2% loss.

For Goodness Sake, Dem caucuses are as dirty as a white puppy rolled in mud, then covered in dirtier dirt before being kicked around by ‘Pigpen’ and accidentally dropped in a sewer.

There is no way of knowing what the real results of a Dem caucus are unless you were there and even then the totals might be much different than the hands raised.

Hillary could have lost by twenty percent and we wouldn’t know. Bonus, the media never reports on this.