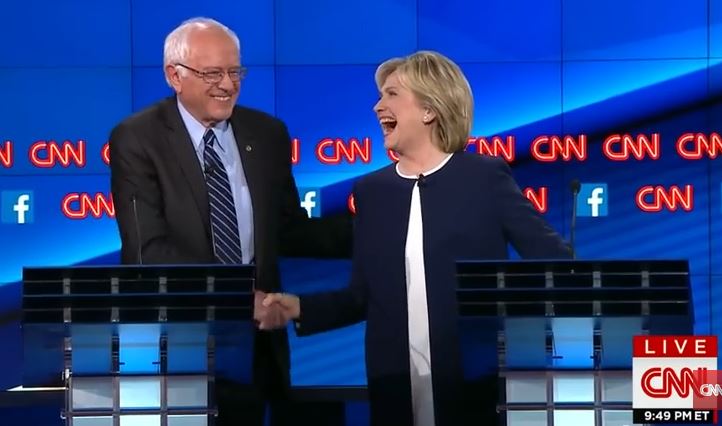 Welcome to our live coverage of tonight’s Democratic presidential debate. The debate begins at 9:00 PM ET on MSNBC and will be moderated by NBC’s Chuck Todd and MSNBC’s Rachel Maddow.

With Martin O’Malley out of the race, the Democratic presidential primary is officially a showdown.

They could’ve had this, but nooooooooo, Democrats want scandal and socialism, apparently. pic.twitter.com/8GoMQD86EM

How to watch the debate:

MSNBC will livestream the debate for your viewing pleasure. Not in front of a TV or computer? No problem. There’s an app for that.

Bernie lost my support three weeks ago when he started combing his hair. Conformist bastard.

Give him a break. Maybe he was trying to tone his hair down for all those swooning women fainting at his feet every time he offers them free college for life.

@ bearded guys moding a criminal and a moron…YAWN

why would i want to watch two idiots babble nonsense?

i’ve w*rked in psych wards before…

Did Barney the Red Communist attack Hillary’s criminal activity while SoS? If not they he isn’t really trying to win the presidency. Maybe just attempting to win a position in the Clinton White House.

Bernie’s a socialist; the LAST thing he wants is a job.

The appropriate interrogative with respect to any Democratic debate is not “How?” but “Why?”

Sanders Claus: “On our worst days, it’s fair to say we are 100 times better than any Republican candidate.” at being Communists.

Yeah, but who is the more Progressive? The Socialist Communist or the Lying Communist?

Bernie Sanders Claus: “The business model of Wall Street is Fraud.” so I’ll shake down people my way.

The Rumble At The Rest-home…

Seriously, why do I never hear they’re going to have these things until the next day?

We homeschool, so we watched the debate and deemed it civics. I know that we are not to say anything positive about the evil Other Side, but we honestly found it much easier to watch than the sniping herd of Republicans. (And, in some respects, it was more productive educationally to consider and address the positions of those with whom we disagree.)