A big get for Rubio 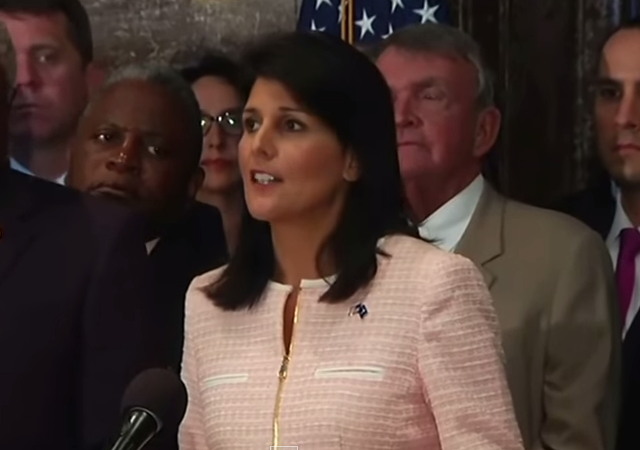 U.S. Sen. Marco Rubio will win South Carolina’s most Republican coveted endorsement of the 2016 presidential race when Gov. Nikki Haley announces her support at a Chapin rally on Wednesday evening, a source with knowledge of the governor’s decision told The State.

Haley, the state’s most popular GOP politician in polls, has decided to back the establishment candidate considered to be in best position to challenge Republican front-runners Donald Trump and Ted Cruz.

Former Florida Gov. Jeb Bush, who has shared advice on education issues with the governor and helped her raise money for her re-election bid in 2014, also was considered a top contender to win Haley’s endorsement.

But he has lagged in recent S.C. polls, falling to fifth in the six-candidate GOP field. Rubio sits third.

Haley’s decision was a bit of a reversal in the past day. The governor told reporters Tuesday that she had not made up her mind on who to back in the 2016 race.

She endorsed Mitt Romney in the 2012 presidential race. While the former Massachusetts governor won the GOP nomination, he lost the S.C. primary to former U.S. House Speaker Newt Gingrich, breaking the state’s three-decade streak of voting for the candidate who landed on the November ballot.

Haley has become a favorite to make vice presidential short lists after her handling of last year’s Charleston shooting and successful call to remove the Confederate flag from the S.C. State House grounds. She gave the Republican response to President Barack Obama’s State of the Union last month.

The governor’s endorsement comes at a critical time for Rubio.

His may be one of the “angry voices” she criticized last month, but S.C. governor Nikki Haley‘s endorsement still matters to U.S. Senator Ted Cruz of Texas.

Sources close to both politicians tell us Cruz is making a feverish bid to get Haley to endorse his 2016 presidential campaign – which scored a win in Iowa, a “show” in New Hampshire and is comfortably ensconced in second place in the Palmetto State’s “First in the South” presidential primary behind frontrunner Donald Trump.

Cruz’s backers are telling Haley she has “nowhere else to go” after current GOP establishment favorite Marco Rubio stumbled to a disappointing fifth-place finish in New Hampshire.

I am very comfortable fighting this primary against supporters of the Confederate flag. Please talk a lot. https://t.co/6d6OyGvunz

Rubio now has the endorsements of the big 3 conservatives in South Carolina. This is a huge way to launch the final 72 hours of campaigning.

Sen. Mike Lee will also be campaigning with Rubio.

Don’t expect any endorsement from Sen. Lee though. He’s campaigning with both Cruz and Rubio.

Could be interesting, but if there continue to be two number two candidates, trump continues to win. If one pulls ahead, Trump could be in trouble.

Michelle Malkin wrote a piece a month or so ago about how the big money open borders crowd is backing Rubio.
http://michellemalkin.com/2015/12/17/open-borders-money-backs-marco-rubio/

Mark Levin got pissed that Rubio called Cruz a lair, so Levin did a long riff using Malkin’s piece to prove Rubio is the liar.
http://therightscoop.com/marco-youre-a-liar-mark-levin-nails-rubio-on-univision-lie/

He’s slimy. I trust him as much as I trust Trump.

Michelle Malkin completely blew it the last time we had a serious talk about immigration, by insisting that everything short of mass deportations is amnesty.

She’s a large part of the reason why Conservatives failed to capitalize on the point that had been so convincingly at the time, that the path to citizenship should not run through an illegal act.

This may help Rubio. Not positive it will. What this will really do is hurt Nikki Haley. Within 1 year after Trump is sworn in she will be very unpopular.

I agree. This will taint her, though I think that’s already been happening. No matter what Rubio says now his “Gang of Eight” isn’t going away and we won’t forget. Rubio and Haley were Tea Party supported candidates…he couldn’t wait to join the DC political cocktail conservatives.

Laughing and glad-handing with Chuck Schumer isn’t going to be forgotten.

Neither are the gay foam parties in Miami.

She just blew being VP.

Meanwhile, something very odd is going on in SC with the so-called “conservative” officials there all going establishment instead of Cruz.

I wonder what it is…

No ody likes ruz that is what is happening. Even uber conervative Senator Mike Lee is reported to start appearing with Rubio.

Is this the same Nikki Haley that removed the confederate flags? Yeah, she’s *super* conservative.

Well that’s not awkward at all. Oops.

Not for the majority of the country.

Must have ear wax up to their knuckles.

Given how thin-skinned Trump is, if he does get elected a whole lot of people will be trying to get away from his rants and attacks and survive politically. When you napalm your opponents they’re probably going to be slow to rally around you.

Or they will finally notice how he wins all ages all income levels and all education levels and come running to him as fast as they can.

I don’t know how they think she’s popular. Everyone in SC that I hear thinks she’s someone who ran Tea Party then turned around and embraced the GOPe. They can’t wait to vote her out.

Then why is her approval rating at 80 per cent?

If the world were a logical place, men would ride side saddle instead of women.

Among Republicans in that state.

Boehner was popular in Ohio. Outside of it, he couldn’t get elected dog catcher. Well, maybe dog catcher.

It’s not. That’s a false narrative. She does not have 80% support from the tea party. She has been exposed as another RINO. One RINO supporting another, not “shocking” or “surprising” at all. Trikki Nikki will be lucky to get re-elected.

And, Nikki Haley had such promise. hahahaha

So now we know she’s a GOPe sellout. She just by extension endorsed open borders and amnesty. Haley would have carried water for the Gang of Eight. Got it.

Hey, kondor77, get back to me when trump runs as an actual conservative and not a populist. On the other hand, little miss erase actual history there ran as a conservative and has been a gigantic disappointment

Trump is incapable of running as a conservative – because he isn’t one. I don’t think I made it clear enough in my comment! 🙂

Secondly, I agree with what Gov. Haley did regarding the Confederate flag. The flag absolutely has a place in our history, in our books, in our movies, video games, etc. I reenact Civil War, WWI, and WWII, so I have plenty of experience with people who are oblivious to history. But reality in the face of public perception (made worse by media and race pimps) is usually a YUGE loser.

To me, it’s one thing if the state institutions want to remove it from “our” buildings. But the day they want to ban someone from putting it up on their property, or putting it on their car, that’s a different ballgame – and I’ll be next to you on that hill.

Haley is a sell out. She and Rubio, sell out Americans at every opportunity.
I hope they vote her out.
Trump,2016

“A big get for Rubio”

Well, it will probably get him one extra vote, Haley’s.

He’ll lose more than that from the anti-Haley backlash.

Can’t see how this helps him, btw, Haley is absolutely toxic to R voters ever since her Amnesty supporting, America bashing, screed that passed for a SOTU “rebuttal”.

Pretty sad to have an R rebuttal endorse the D’s Holy Grail policy agenda while openly attacking the R front-runner for the POTUS nomination.

After her idiotic ‘response’ to Obama’s state of the onion (sic) speech Haley has proved herself to be a rino putz.

We can be thankful she showed her colors early on.

gang of eight
that is all that needs be said
about Marco ….

Nothing will make protestants and evangicals come out to vote for Trump than a catholic pope denouncing Trump for wanting to build the Wall. The Pope’s assignine statement on this could give Trump several extra percentage points on Saturday.

Pope Irony be thy name. Vatican City the country where tbe pope lives is completely surrounded by a 30ft high wall. The biblical story of logs and specks of dust comes to mind regarding the pope.

Haley is a RINO. I suspected she was one when she made public her thoughts on the Confederate flag. She can’t support Cruz because he’s considered “extreme” so Rubio seems right up her ally. Typical. I suspect she’s also eyeing a VP spot from him as well if he were to win the nomination.