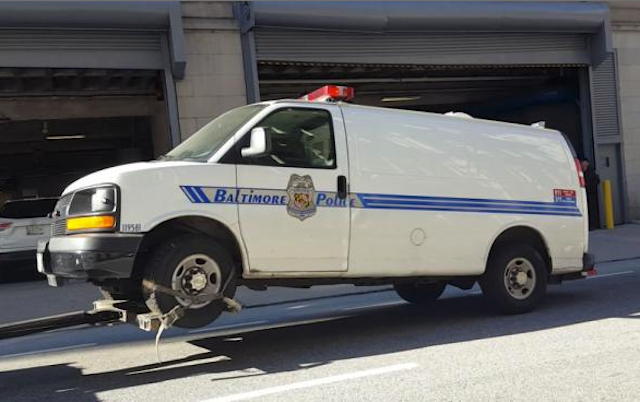 The Baltimore Sun reports today that city officials will finalize approval of a contract this week to install video cameras inside the Police Department’s 23 transport vans, at a cost of $187,000.

The impetus for this effort is found in numerous cases of suspects suffering injuries while being transported in the vans. The best known case of this type is, of course, that of Freddie Gray, who suffered a severe spinal injury last April while being transported in a police van. Gray would die some days afterwards. Riots wracked the city following Gray’s death, leading to Prosecutor Marilyn Mosby’s precipitous criminal charging of six officers involved in Gray’s arrest and transport.

The absence of video cameras in the van transporting Gray makes it impossible to know precisely when and how Gray suffered his spinal injury.

Legal Insurrection’s extensive coverage of the Freddie Gray case can be found by clicking here.

Baltimore Mayor Stephanie Rawlings-Blake’s office sought bids on such a camera system four months after the events surrounding Gray’s death, and it seems that from among the six responses received the winner is to be the a company named (somewhat awkwardly, given the context) “Point Blank.”

Although  in-vehicle video cameras might seem to be an obvious solution to avoiding future uncertainty around Freddie Gray type injuries in the future, it is worth remembering that Baltimore Police Department officials have previously testified that the department’s IT infrastructure, including it’s email system for officers, is barely functional.  The notion that these in van cameras would be better supported seems a rather desperate attempt at hope over experience.

Compared to the millions the taxpayers have been socked with in “rough ride” and other police abuse payouts over the past decade or so, $187,000 is a bargain.

It’s the cost-benefit analysis I’m thinking of here. If spending $187,000 can save the taxpayers of Baltimore $6 million or more, that’s a pretty good return on investment.

That depends on your assumptions. If you make them explicit, the CBA may not look so good.

You’re assuming that if there had been video evidence showing when and how the injuries happened, the city lawyers wouldn’t have made those settlements. I’m not so sure.

So how is this going to prove that the criminals were given a rough ride? I don’t think is will provide that.

I wonder how much of that $187,000 flows into the “political contributions” bucket of some city “leader.”

I think “a considerable amount” would be a good guess.

This is Maryland, the Land of Good Government, where the State legislature replaced an auditable paper ballot system with a touch-screen system that the state’s own consultants said was vulnerable to tampering.

I was impressed with the system they had. It used a big piece of sturdy paper, wide black marker to complete an arrow to vote, followed by scan that immediately records the votes and rejects any ineligible ballots due to misvoting on the spot. The first time I voted, it took thirty minutes to complete the statewide vote tally in an off-year election.

I was there when Shane Pendergrass was told by her own consultant that the system they had was good, and the one she wanted was not, but she was hell-bend on preventing hanging chads, never mind that the hanging chads were in Florida and had nothing to do with Maryland.

And cost is not an object.

“Hanging chads” had nothing to do with the push for touch-screen voting.

It was the fact that there is no paper trail and thus no way to detect fraud.

Fraud is a feature, not a bug, for those determined to end free and fair elections.

It’s amazing how money is no object when you’re spending “other people’s money”. If we had decent reporters, we’d have them investigating whoever won that contract and who they had ties with.

They paid out a multi million dollar settlement before they even finished the investigation. The camera would have changed nothing about this politically motivated case.

Is the job of police officers now to maintain body cameras, paddy wagon cameras, license plate readers and other expensive gadgets while looters burn down the city around them? Or is it to maintain public order? It’s hard to discern anymore.

“…a rather desperate attempt at hope over experience.”

Or perhaps image over substance.

1) The cameras will not prevent any injuries unless one suspects the police actually did have a hand in the death of Freddie.

2) The cameras may not prevent any settlements either as Baltimore paid out a large settlement here before any facts were known except that Freddie was dead. The payout would just have to be before the recording could be reviewed (assuming the recording worked).

Definitely image over substance generally, but hope over experience as it applies to Baltimore specifically.

Generally speaking, though, you’re correct. Cameras don’t “prevent” anything. They are a lousy deterrent and are ridiculously easy to defeat by low-tech means.

The only way cameras would prevent anything is to fill the back of each van so full of cameras there would be no room to ride and the perps would have to walk to the police station on their own recognizance. That way no one would get hurt and everything would be good.

What are they getting for $8,000 per vehicle? gold plated cameras.

No expense is too great for the best and brightest of Baltimore who will be riding in those vans.

Good idea, but if there are any tech issues the media will automatically assume this is evidence of foul play.

I could go out there and put a GoPro camera in every vehicle for less than $500 each and add a tamper cage for another $500 each. What’s the other 7 THOUSAND for.

8 thousand dollars each is utterly ridiculous.

Freddie had other plans.

Once the camera are in place what’s to prevent the cops (or the transported perps) from disabling them? I’m betting that within a year of installation 1/3 of the cameras will be non-functional.

Also it would be interesting to know the identities of the principals and agents of Point Blank.

False claims against police drop 80-90% when the perps are educated that they are on candid camera.