DHS Whistleblower: I was ordered to scrub records of Muslims with terror ties

DHS Whistleblower: I was ordered to scrub records of Muslims with terror ties

“A political scrubbing of records” 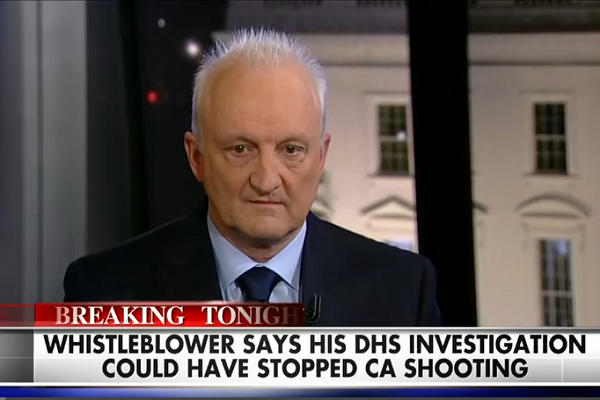 Obama’s first year in office was a busy one as he worked tirelessly to hinder the government’s ability to identify, locate, track, or make common sense connections between Islamists and terrorism.

In April of 2009, the DHS released a now-infamous report entitled “Rightwing Extremism: Current Economic and Political Climate Fueling Resurgence in Radicalization and Recruitment” and in which conservatives were labeled potential terrorists not because they are radical militants but because they are pro-life, support the Tenth Amendment, or are veterans.

Michelle Malkin wrote at that time:

It is no coincidence that this report echoes Tea Party-bashing left-wing blogs (check this one out comparing the Tea Party movement to the Weather Underground!) and demonizes the very Americans who will be protesting in the thousands on Wednesday for the nationwide Tax Day Tea Party.

Rightwing extremism in the United States can be broadly divided into those groups, movements, and adherents that are primarily hate-oriented (based on hatred of particular religious, racial or ethnic groups), and those that are mainly antigovernment, rejecting federal authority in favor of state or local authority, or rejecting government authority entirely. It may include groups and individuals that are dedicated to a single issue, such as opposition to abortion or immigration.

In 2011, the Obama administration ordered the FBI to cease all surveillance on mosques that might be radicalizing potential jihadis in the U. S.; this move was pointed to as a reason that the Boston bombers were not detected before their terrorist attack.

Now, a former DHS employee contends that he was ordered in 2009—the month before the failed attempt of the Christmas Day “underwear bomber“—to edit or delete hundreds of files on individuals connected to Islamic terrorism.

. . .  [I]n early November 2009, I was ordered by my superiors at the Department of Homeland Security to delete or modify several hundred records of individuals tied to designated Islamist terror groups like Hamas from the important federal database, the Treasury Enforcement Communications System (TECS). These types of records are the basis for any ability to “connect dots.”  Every day, DHS Customs and Border Protection officers watch entering and exiting many individuals associated with known terrorist affiliations, then look for patterns. Enforcing a political scrubbing of records of Muslims greatly affected our ability to do that. Even worse, going forward, my colleagues and I were prohibited from entering pertinent information into the database.

A few weeks later, in my office at the Port of Atlanta, the television hummed with the inevitable Congressional hearings that follow any terrorist attack. While members of Congress grilled Obama administration officials, demanding why their subordinates were still failing to understand the intelligence they had gathered, I was being forced to delete and scrub the records. And I was well aware that, as a result, it was going to be vastly more difficult to “connect the dots” in the future—especially beforean attack occurs.

Haney goes on to explain that had this information not been removed or modified terror attacks after November 2009 might have been prevented.

As the number of successful and attempted Islamic terrorist attacks on America increased, the type of information that the Obama administration ordered removed from travel and national security databases was the kind of information that, if properly assessed, could have prevented subsequent domestic Islamist attacks like the ones committed by Faisal Shahzad (May 2010), Detroit “honor killing” perpetrator Rahim A. Alfetlawi (2011); Amine El Khalifi, who plotted to blow up the U.S. Capitol (2012); Dzhokhar or Tamerlan Tsarnaev who conducted the Boston Marathon bombing (2013); Oklahoma beheading suspect Alton Nolen (2014); or Muhammed Yusuf Abdulazeez, who opened fire on two military installations in Chattanooga, Tennessee (2015).

It is very plausible that one or more of the subsequent terror attacks on the homeland could have been prevented if more subject matter experts in the Department of Homeland Security had been allowed to do our jobs back in late 2009. It is demoralizing—and infuriating—that today, those elusive dots are even harder to find, and harder to connect, than they were during the winter of 2009.

This is not the first time that Haney has raised concerns about the Obama administration’s frantic efforts to switch the focus of government surveillance away from potential terrorists.

Watch him discuss his concerns about his surveillance program that might have thwarted the San Bernardino terror attack.

Nothing like our gov giving a pass to terrorists while considering those who value the Constitution to be extremists. Amazing how the DC elites fear the citizen more than the foreign invader. Maybe those elites should have their salaries paid by the invaders, since we shouldn’t have to pay for our own demise because our own leaders are selling us out.

So, jihadis should be considered simply “extremists,” whereas “rightwing extremists” get their rightwingery specified in detail?

Apparently it’s safe to answer that question if someone is extremely inclined to carry around a copy of the U.S. Constitution (a habit that the U.S. government has listed as a red flag of menace). But if someone is extremely devoted to following the example of Muhammad and fulfilling the obligation of jihad in the path of Allah? Well, that’s just a cover for naked “extremism.”

Sorry – this wasn’t supposed to be a reply.

This is a very serious charge. Does he have documents or other information to substantiate this?

As I’ve asked before, if her really were a Manchurian candidate bent on undermining our nation and rendering it vulnerable to collapse, from within or without, how would things be different?

That should be “he”. Wish we could edit our replies.

That’s OK. An apparent Freudian slip. You were writing about Obama, but thinking about Hillary.

Obama’s been in office so long, the shock of his continuing treason is wearing off, and stories like this don’t shock us, either.

How did this come to pass? Think ‘boehner.’

What a surprise! Unexpected!

This is the administration that cooks the books on weather measurements and employment statistics, why not the data on terrorists?

Clearly, the philosophy is that, they can magically make things go the way they want, by lying about the facts.

But impeachment is off the table.

Um, yes, impeachment is off the table, so long as there remain at least 34 senators who would vote to acquit him no matter what he did. At last count there were at least 55. Prosecutors don’t indict someone whom they don’t think they can convict, so why would you expect the House to do so? You know that he and his supporters would take his acquittal as vindication, and would wear the “unfair” impeachment as a badge of honor, just as Clinton did.

The House has the duty to impeach when the President’s conduct is deserving of the punishment. It is not the business of the House to protect the reputations of those in the Senate who might fail to do their duty to convict. Allow them to besmirch themselves before history. While protecting the Senators’ reputations, the Representatives besmirch their own. How the Senate may vote is not a proper concern of the House.

You can’t use the dead as a podium from which to espouse and anti-gun and anti-freedom agenda if there are no dead. Terrorist attacks prevented are media opportunities that aren’t realized. In order to never let a crisis go to waste, one must have crises.

While Obama claims to be a Christian, the evidence that he is really a Muslim (and a closet supporter of Iran and Islamic unrest) continue to mount. Of course, there is little question left that Obama’s overarching goal is to bring America down a peg or two or fortyseven. When Obama was campaigning and running with a platform where he was promising to fundamentally change America, far too many forgot the old adage “Change is inevitable, improvement is optional”.

Don’t be silly. There is no evidence that he’s a Moslem, and only crazy people think he is.

For one thing, if he were a Moslem he’d surely be Sunni, and thus hate the Iranian infidels.