“What happened Monday night at the Democratic caucuses was a debacle, period.” 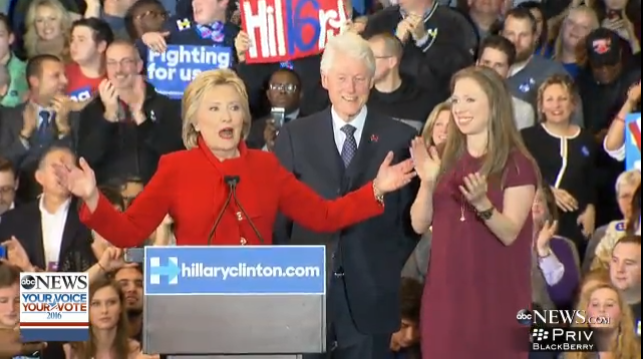 Something is rotten in Iowa and it’s the results of Monday night’s Democratic Caucus.

Hillary won by the skin of her teeth and with the help of some incredible luck in a half-dozen coin tosses.

Thursday, the editorial board of the Des Moines Register called for an audit of Monday night’s Democratic Caucus results. It’s worth noting the DMR’s endorsed Hillary Clinton as their Democratic candidate of choice. “Something smells in the Democratic Party,” they wrote.

Once again the world is laughing at Iowa. Late-night comedians and social media mavens are having a field day with jokes about missing caucusgoers and coin flips.

That’s fine. We can take ribbing over our quirky process. But what we can’t stomach is even the whiff of impropriety or error.

What happened Monday night at the Democratic caucuses was a debacle, period. Democracy, particularly at the local party level, can be slow, messy and obscure. But the refusal to undergo scrutiny or allow for an appeal reeks of autocracy.

The Iowa Democratic Party must act quickly to assure the accuracy of the caucus results, beyond a shadow of a doubt.

The DMR then listed its reasons for believing an audit necessary:

Second, too many questions have been raised. Too many accounts have arisen of inconsistent counts, untrained and overwhelmed volunteers, confused voters, cramped precinct locations, a lack of voter registration forms and other problems. Too many of us, including members of the Register editorial board who were observing caucuses, saw opportunities for error amid Monday night’s chaos.

The Sanders campaign is rechecking results on its own, going precinct by precinct, and is already finding inconsistencies, said Rania Batrice, a Sanders spokeswoman. The campaign seeks the math sheets or other paperwork that precinct chairs filled out and were supposed to return to the state party. They want to compare those documents to the results entered into a Microsoft app and sent to the party.

Dr. Andy McGuire, chairwoman of the Iowa Democratic Party, dug in her heels and said no. She said the three campaigns had representatives in a room in the hours after the caucuses and went over the discrepancies.

They even suggested a pathway forward, one that sounds perfectly reasonable:

Work with all the campaigns to audit results. Break silly party tradition and release the raw vote totals. Provide a list of each precinct coin flip and its outcome, as well as other information sought by the Register. Be transparent.

And then call for a blue ribbon commission to study how to improve the caucuses, as the Republican Party of Iowa did after its own fiasco in 2012. Monday’s mess showed that it’s time for the Democrats to change, too.

The current process grew out of efforts to find a more democratic way to choose delegates to conventions, after the grassroots saw how Democratic powerbrokers controlled the nominating process in 1968. But the caucuses have become as antiquated and opaque as the smoke-filled rooms of yore.

Democrats should ask themselves: What do we want the Iowa caucus to be? How can we preserve its uniqueness while bringing more order? Does it become more like a straw poll or primary? How do we strike the balance between tradition and transparency?

We have time to consider these questions. First, however, we need answers to what happened Monday night. The future of the first-in-the-nation caucuses demands it.

Can you imagine if the results of an audit flipped the Caucus in Bernie’s favor? What a glorious disaster that would be.

We all know that a Democrat will steal any close race. But to steal from a fellow Socialist/Progressive? That’s low, even for a Clinton.

“Something smells in the Democratic Party,”

Oh.
So they’ve finally smelled it.We’ve been telling them for years.

Or is it that the stench has become so strong that they cannot ignore it any longer?

It was rotten in the republican caucus too. Brietbart has just released voicemails from Ted Cruz himself spreading the lies about Ben Carson.

It was rotten 4 years ago in the republican contest too. (They delayed the official count for so long that Santorum’s win wasn’t official until other states voted, denying Santorum any momentum).

The Iowa caucus has to go. It should be a real vote held on the same night as NH.

Let me echo that. I’m appalled and disappointed at the Cruz campaign and the bullshit political blathering as per usual.

What lies? Turns out Carson appears to be out after all.

Clinton, Democrats, Voting , oh my. What did Bernie expect dealing with Hillabeast. Bernie the fun has only begun so watch your back and the ballots or you will be soon out the door.

It is important to note that the leader of the Iowa Democrat Party, Dr. Andy McGuire (female), is (a) refusing to cooperate with calls to audit caucus results, and (b) is a longtime personal friend and political supporter of… Hillary Clinton.

One of the items in the “Blogs I Read” in the right column/margin (I didn’t catch which one, and it’s gone now) reported that the personalized license plate for the head of Iowa’s Democratic Party is “HRC 2016”!

Shrillary stole the caucus vote in true LibDem style and she’s going to keep it.