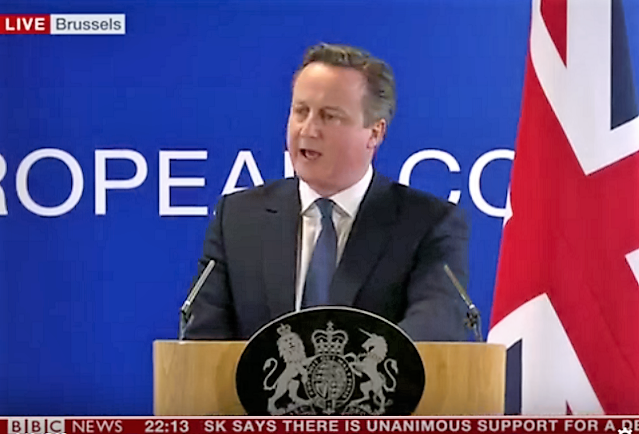 In November, Vijeta wrote about David Cameron’s warning to the EU: reform or risk “Brexit” (British exit from EU).  Cameron’s demands were as follows:

After days of conflicting signals about his attitude toward the European Union, Prime Minister David Cameron on Tuesday formally outlined his approach to negotiations with other member countries ahead of a crucial referendum that will determine whether Britain stays in the 28-nation bloc.

His demands included a safeguard to prevent countries that use the euro from discriminating economically against Britain, which has retained the pound; a stronger role for national parliaments in European Union decision-making; and an end to Britain’s legal commitment, as a signatory to European Union treaties, to pursue “ever closer union,” which conservatives see as a threat to national sovereignty.

Prime Minister Cameron also demanded the right to curtail the welfare entitlements for new migrants arriving from the rest of Europe to his country– a move that would violate European Commission regulations deeming all citizens of the member countries eligible for social benefits within EU territory.

In his article, Vjeta notes that public opinion in the UK has turned against the EU and that this might explain why Cameron’s demands are centered on retaining the UK’s sovereignty and national identity—goals that would seem to be at odds with the very nature and purpose of the European Union experiment at creating a single “super state.”

Cameron has now reached an agreement with EU leaders that he hopes will keep Britain in the EU.

Cameron had demanded far-reaching concessions from his E.U. counterparts, saying that he needed to prove to increasingly populist voters that an institution often seen in Britain as an overbearing infringement on national sovereignty could loosen its grip. But continental leaders, who support keeping Britain in the club, drove a tough bargain, and some bridled at what they regarded as a British attempt to blackmail the bloc into giving the country a special deal.

In the end, Cameron received significantly less than what he had initially sought. But he still claimed victory Friday night and immediately pivoted to what is certain to be an emotional and bitterly fought campaign over the country’s future in the body that has defined Europe’s postwar order.

“The British people must now decide whether to stay in this reformed European Union or to leave,” he said. “This will be a once-in-a-generation moment to shape the destiny of our country.”

. . . . “I do not love Brussels; I love Britain,” he said. But staying in the bloc gives his country “the best of both worlds,” with the opportunity to keep the benefits of E.U. membership while “staying out of the parts of Europe that don’t work for us.” An exit, he said, represents “a leap in the dark.”

The Telegraph reports on some details of the deal:

Britain or any individual non-euro member state can now pull an emergency lever over eurozone laws they have “reasoned opposition” to, forcing leaders to hold back from implementation until their concerns are addressed.

The settlement also enshrines a “level playing field” in financial regulation for euro ins and euro outs, appeasing both sides concerns over discriminatory practices. Both these provisions will eventually be written into EU law when the bloc’s legal settlment is opened up within the next five years.

Watch Cameron explain the details of his have our cake and eat it, too deal:

The BBC reports that Cameron has scheduled the referendum—a vote on whether or not to stay in the EU—for June 23rd.

While Cameron has announced his intention to campaign for remaining in the EU, Nigel Farage, leader of UKIP (UK Independence Party), sees the referendum as a “golden opportunity.”

June 23rd: our golden opportunity. Let battle be joined. We want our country back.

We know exactly what life outside EU would look like: control of our borders, global trade deals, making our own laws. An exciting future.

The EU has gotten sufficiently fragile that any major exit will bring it down like a house of cards. The Economist is already predicting additional bailouts for Greece later this year. Cameron’s deal might not yield the expected dividends, depending on whether or not there is any meaningful EU left in the medium term.

It is hard to imagine Cameron agreeing to such a refendum, regardless of his pledge to do so, if he did not have a reasonable level of certainty that it would fail. I would expect events to unfold in the coming months to create a situation where exiting the Euro would be portrayed to be disastrous for the UK.

LibLabCon just need a temporary situation dire enough to scare the pants off of Britons so they vote the right way. Once the referendum fails, whatever the problem was will resolve itself quickly.

I will be shocked if something akin to the above fails to occur.

The elites know how to do this. If you don’t like the vote just make them hold another until you get what you want.

Well apparently the urge to leave the EU is making for some rather unexpected allies in Britain.

That the fabulous UKIP and the loathsome Galloway have this issue in common is proof that politics can lead to strange bedfellows. They should promise that if the voters dump the EU, they will flood the Chunnel.

Well instead of flooding the Chunnel I would far rather that they crack down hard on the illegals sneaking in on trucks through it, especially because it seems the truckers are being fined if any illegals are found in their trucks when they make it to the British side of the channel.

I can understand fining someone who’s deliberately smuggling them in but most of these guys are simply trying to do their jobs and are being punished for the actions of those who stowing away in their vehicles. That is simply messed up and wrong on the part of the British government!