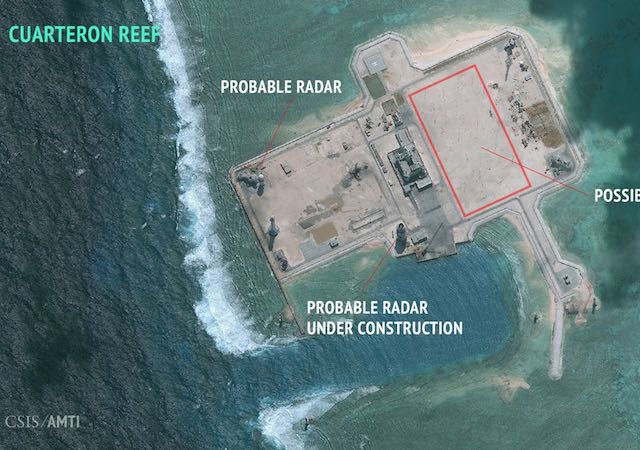 On Fox News Tuesday, U.S. officials announced China has deployed a series of fighter jets to a contested island in the South China Sea known as Woody Island. The news comes little more than a week after surface to air missiles were spotted via satellite on the same island.

Officials said U.S. intelligence has seen both Chinese Shenyang J-11 and Xian JH-7 jets on Woody Island for the past few days. One official estimated that there were as many as nine of these jets deployed to the island.

Although the deployment of aircraft and surface to air missiles to Woody Island in the Paracels are significant steps, more important are actions in the sea’s southernmost region. The Asia Maritime Transparency Initiative (AMTI) explains:

“China’s airstrip construction at Fiery Cross, Mischief, and Subi reefs, and more recently developments in the Paracel Islands, have dominated the South China Sea discussion. But capabilities being developed at its smaller Spratly Island outposts—Gaven, Hughes, Johnson South, and especially Cuarteron reefs—will prove equally important to Beijing’s long-term strategy. This month’s deployment of HQ-9 surface-to-air missiles on Woody Island in the Paracels, while notable, does not alter the military balance in the South China Sea. New radar facilities being developed in the Spratlys, on the other hand, could significantly change the operational landscape in the South China Sea. And along with the development of new runways and air defense capabilities, they speak to a long-term anti-access strategy by China—one that would see it establish effective control over the sea and airspace throughout the South China Sea.”

AMTI cautions that the developments on Woody Island are often later mirrored on China’s more southern outposts such as the Spratly Islands, where militarization could potentially pose a threat to vital shipping routes.

“China already has significant radar coverage on the northern half of the South China Sea given its facilities on the mainland and in the Paracel Islands … [P]lacement of a high frequency radar on Cuarteron Reef would significantly bolster China’s ability to monitor surface and air traffic coming north from the Malacca Straits and other strategically important channels (how much would depend on the specifics of the radar positioned there). Improved radar coverage is an important piece of the puzzle—along with improved air defenses and greater reach for Chinese aircraft—toward China’s goals of establishing effective control over the sea and airspace throughout the nine-dash line.” 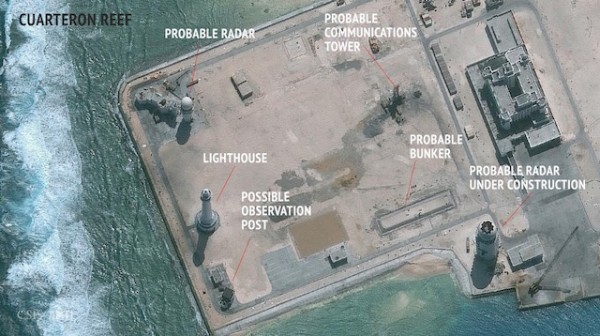 In the U.S., news of the aircraft deployment on Woody Island came as Secretary of State John Kerry hosted Chinese Foreign Minister Wang Yi at the State Department, also on Tuesday. During the trip, Kerry expressed his wishes for the militarization of “occupied features” to come to a halt, while Wang asked that the U.S. halt its close-up military confrontations and patrols of the region. Making sure not to single out China individually, Kerry said, “it is important for all of the nations – China, Philippines, Vietnam, others – not to engage in any unilateral steps of reclamation, of building, of militarization. And the fact is that there have been steps by China, by Vietnam, by others that have unfortunately created an escalatory cycle.”

It is difficult to believe Kerry thinks his words fall on anything but deaf ears. Referring to the contested islands and reefs as “occupied features” calls into question whether U.S. understands the perspective of its adversary in respect to the islands. To Beijing, the islands and structures are not merely occupied. They are sovereign Chinese lands. Any interference in its island development and building, therefore, is viewed an obstruction of its own sovereignty which, China believes, it has a right to defend. Whether Kerry understands this or is refusing to address it for strategic regions is unclear.

“There is no difference between China’s deployment of necessary national defense facilities on its own territory and the defense installation of the U.S. in Hawaii,” a spokeswoman for the Foreign Ministry said Monday.

The quickened pace of Chinese militarization in the region in indicates the nation is not wasting any time before President Obama leaves office. Fox News reports China has quietly created a total of 3,000 acres of artificial land in the last two years alone. The U.S. has taken the diplomatic route with some Freedom of Navigation and innocent passage operations, which the PLA Navy has so far refused to accept.

Meanwhile, head of U.S. Pacific Command Adm. Harry Harris said that the U.S. needs to invest in newer-generation anti-surface missiles in order to counter its Chinese rivals. In a Tuesday hearing with the Senate Armed Services Committee, Harris said the Navy was still using the same weapons he used as a junior officer. “When I started flying P-3s in the 1970s we had the Harpoon missile, and it’s the same one we have today,” he said.

Harris was also quite frank in his assessment of China’s activities. “In my opinion, China is clearly militarizing the South China Sea. You’d have to believe in a flat earth to believe otherwise.”

Images of Cuarteron Reef via AMTI

Did the Philippines recently reverse a law that restricted US forces from being stationed there?
I was in China a couple of years ago and the TV nightly news covered Chinese ownership of the south China Sea. Every single night.
It will be tough for the smaller nations in the area to come together and roll this back, I would think. As we know, Tibetans are a minority in their own country now. And Muslims Uyghurs are a minority in Xinjiang Province, I believe, due to aggressive and gov-sponsored settlement by Han Chinese.
Still, most US and Euro progressives remain stuck on historical abuse of Native Americans. Good luck with that, guys.

Jim – Yes, it does seem like the Obama administration looks at the world through an anti-colonialist lens.

I’m not sure if the Philippines reversed any particular law, but there was talk earlier this month of the U.S. and Philippines conducting unannounced joint naval patrols in the disputed waters. Perhaps you meant Vietnam?

The U.S. doesn’t have formal relations with Vietnam, but the Vietnamese would probably be open to the U.S. getting involved in some way, perhaps by returning to Cam Ranh military base. The only problem is that America doesn’t want to do anything that puts a wedge between us and China/Russia. Obama is scheduled to visit Vietnam in May, which could be TPP related, but it could also be S. China Sea related.

I think there was a tentative agreement in ’14 and now the Ph Supremes have blessed it.
http://www.defensenews.com/story/defense/2016/01/13/official-philippines-offer-use-eight-bases-us-forces/78736552/

If we had this “smart diplomacy” 75 years ago we would be speaking German.

Not to worry, obama will apologize to China.

This is a feature, not a bug, of this current administration’s idea of foreign policy.

We already have one war, because Obama and the entire Democratic Party did not have the intestinal fortitude to finish midwifing Iraqi liberty. There will surely be another.

The Chinese are destroying coral reefs creating their artificial islands, yet not a peep from the usual environmentalist suspects…

The Chinese have the temerity to claim the US is “militarizing” the South China Sea by conducting naval and aerial patrols in international waters, where we have patrolled for what, a century at least?

“… U.S. intelligence has seen both Chinese Shenyang J-11 and Xian JH-7 jets on Woody Island for the past few days…”

To give some quick background, the J-11 is a modern fourth generation twin-engine single-seat fighter ‘cloned’ from the Soviet SU27, and the JH-7 is a late 80s style fighter-bomber that has been upgraded throughout its lifespan and is tasked with anti-shipping missions, so it can carry the most modern Chinese ASMs. In short, modern air cover and strike missions.

Undoubtedly, the US and allies are watching every little bump on the artificial island, and most certainly have each strategic item pre-programmed into a strike mission package, just in case. Well, the Japanese at least. Ours will have to wait to see how global climate change would be affected.

Why not? Who’s going to stop them? – A nose-picking weasel like Obama? – Who is a traitor to his own country?

The might as well invade Taiwan before January and get it over with.