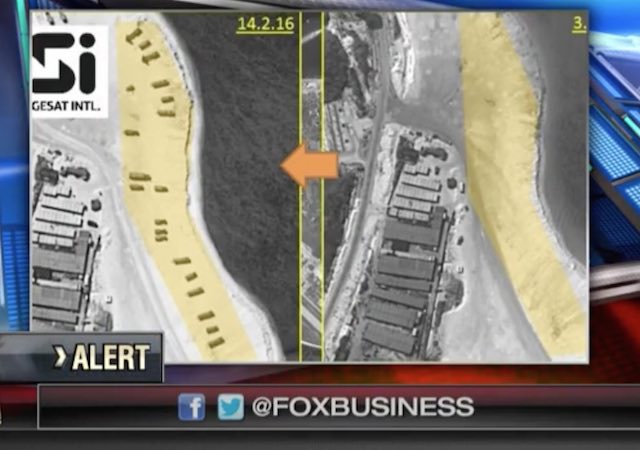 China has deployed an advanced anti-aircraft missile system to a contested island in the South China Sea, Pentagon officials confirmed on Tuesday. The news came as President Obama concluded a two-day conference at the Association of Southeast Asian Nations (ASEAN) in Sunnylands, California.

Satellite images from February 14 show several HQ-9 missile launchers lined along the beach of Woody Island of the Paracel Island chain. The HQ-9 is a medium to long-range surface-to-air missile system with advanced radar homing capabilities. It can shoot down missiles as well as aircraft up to 125 miles away.

That the missiles were discovered at the same time President Obama met with ten other ASEAN world leaders is likely no coincidence. Obama said the leaders convened to “discuss the need for tangible steps in the South China Sea to lower tensions, including a halt to further reclamation, new construction, and militarization of disputed areas.”

Rick Fisher, a China military affairs analyst said the move is a significant military escalation in the South China Sea. “China’s deployment of up to 64 HQ-9 surface-to-air missiles to Woody Island just before the ASEAN summit in California constitutes a major slap against ASEAN and the Obama administration,” Fisher said. “It should now be clear that the Obama administration diplomacy and freedom of navigation operations are useless in stopping China from militarizing its islands in the Paracel and Spratly islands groups.”

Fisher also cautioned that China could supplement the HQ-9 with more powerful anti-ship cruise or ballistic missiles with a range of 870 miles.

Predictably, China’s foreign minister down-played the news, effectively recommending that the media move along because there’s nothign to see here. The foreign minister dismissed the missile reports, saying they were created by “certain Western media.” Instead, he recommended that the media focus on China’s building of lighthouses and on how they have improved shipping navigation and safety in the region.

The Chinese military warned in late January that the passage of a U.S. Navy destroyer by Triton Island, another Paracel island, might trigger further militarization in the region. The Peoples Republic has maintained it would not seek to militarize the islands but insists it has a right to self defense.

After learning of recent developments, Secretary of State John Kerry said he expects to have a “very serious conversation” with the Chinese. It’s unclear as to whether another serious conversation will have much bearing on China’s continued military expansion.

Richard Javad Heydarian, an assistant professor at De La Salle University in Manila, says China is “upping the ante and beginning to send a clear signal that it won’t tolerate any American military presence close to its occupied land features.”

Heydarian spoke with the Japan Times about his concern over what China might do next:

” ‘This is very alarming, because the Spratly chain of islands could be next, especially with the Chinese airstrips in the area either (having) been completed, like in Fiery Cross, or soon to be, as in Subi and Mischief reefs,’ he said in an email.

Perhaps the most alarming implication regarding the missile deployment is the fact that China is one step closer to exerting control in the surrounding international waters. With the ability to down nearby aircraft, they could potentially declare or enforce an Air Defense Identification Zone.

Sounds like the combined forces in the area need to do another Operation Paul Bunyon. Just a little freedom of navigation exercise with a few hundred cruise missiles held ready and preprogrammed in the event China wants to sink a ship or shoot down an airplane.

Most probably next year.

No surprise. The reef, now an island, is a Chinese military base. It has an airstrip and a harbor. Of course it’s going to have an anti-air defense — a military commander would be irresponsible not to have that on an exposed island several hundred miles away from the mainland.

The correct response: there are lots of these reefs out there. The U.S. should go sit on one or two, and build bases.

Hey, why not? Who’s going to stop them?

Still waiting for the Greenpeace ships to protest the dumping of hundreds of thousands of tons of concrete on to a live coral reef. But it’s just silence from those hypocrites. C’mon Greenpeace, sail your ship right up to the Chinese and see what happens. But you won’t, it’s only America and Capitalism that you protest against.

White wall tires??? On a missile launcher?
The Chinese never cease to amaze me.