We will miss her. 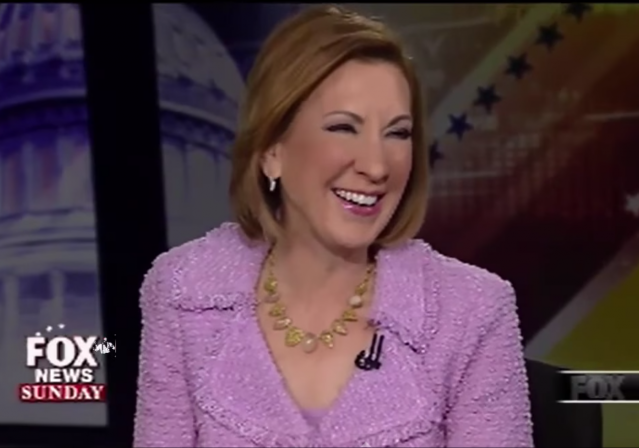 Carly Fiorina just posted on her Facebook page that she is suspending her campaign:

This campaign was always about citizenship—taking back our country from a political class that only serves the big, the powerful, the wealthy, and the well connected. Election after election, the same empty promises are made and the same poll-tested stump speeches are given, but nothing changes. I’ve said throughout this campaign that I will not sit down and be quiet. I’m not going to start now. While I suspend my candidacy today, I will continue to travel this country and fight for those Americans who refuse to settle for the way things are and a status quo that no longer works for them.

Our Republican Party must fight alongside these Americans as well. We must end crony capitalism by fighting the policies that allow it to flourish. We must fix our festering problems by holding our bloated, inept government bureaucracy accountable. Republicans must stand for conservative principles that lift people up and recognize all Americans have the right to fulfill their God-given potential.

To young girls and women across the country, I say: do not let others define you. Do not listen to anyone who says you have to vote a certain way or for a certain candidate because you’re a woman. That is not feminism. Feminism doesn’t shut down conversations or threaten women. It is not about ideology. It is not a weapon to wield against your political opponent. A feminist is a woman who lives the life she chooses and uses all her God-given gifts. And always remember that a leader is not born, but made. Choose leadership.

As I have said to the many wonderful Americans I have met throughout this campaign, a leader is a servant whose highest calling is to unlock potential in others. I will continue to serve in order to restore citizen government to this great nation so that together we may fulfill our potential.

I have to say that much more so than other candidates who have dropped out, I’ll miss Carly. She added a refreshing willingness and ability to go after Hillary.

Carly had her chance to rise to the top after the first Republican debate, and she did for a short time. But it didn’t last. 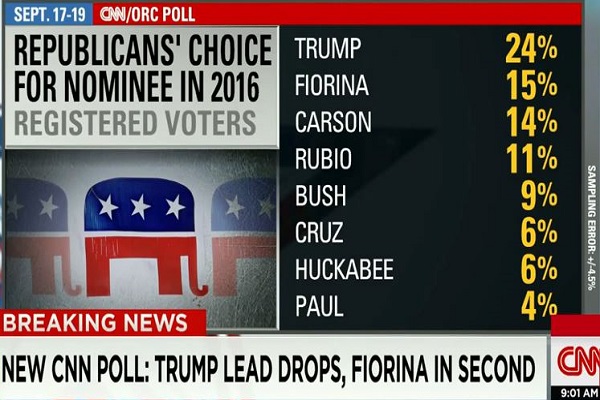 For whatever reason, she just couldn’t sustain the momentum. She never convinced the voters to seriously consider her as their top choice for president, even if she was lower down on the list.

She has proven herself an able campaigner, and needs to be on the short list for VP nominees.

Without further ado, here are some of my favorite Carly moments:

This probably was her most well-known debate moment:

And here, she spoke a truth:

All I can say is what they were saying through the halls of HP when they announced her firing as HP CEO.

Ding Dong the Witch is dead!

There’s nothing like repeating a mindless comment is there? Carly was the only candidate that exposed the status quo of all the present office holders and the lies they told to get there. She might not have been the total package but she was certainly the on the right message.

What mindless comment? I’m simply reminding everyone of the joy that the employees of HP — who probably average twenty IQ points higher then you so mindless? — expressed when she left.

Did you work for HP? If so, can you tell me why the quality of their ultrasounds machines went down before Ms. Fiorina took over?

Would have liked to hear Fiorina’s answer on women being forced to register for the selective service, especially after Christie’s answer about women growing up and dreaming about getting drafted.

For such a high IQ, I would expect you to know the difference between “then” and “than.”

I respect Carly a lot. Her voice needed to be heard above the cacophony of feminist drivel.

And, she pounded on Hillary. Deep cracks in the Hillary façade are starting to show.

I’ll miss Carly’s zeal for this country and her prolife stance at the forefront of the presidential race.

“And, she pounded on Hillary.”

Absolutely. I hope she makes an endorsement of a remaining candidate (it doesn’t matter who), and jumps back on the trail with Hillary-bashing as Job #1.

She was just another GOPe clone in a skirt. Won’t be missed.

If she was so great she would have caught on. She didn’t for a reason.

You are projecting again, Gary, just like Trumph the Insult Dog.

Unfortunately, a Northeastern Liberal, with zero record of Conservative principles, and who parties with the Clintons, sucked all the air out of the room. Celebrities can do that.

Carly Fiorina was a passionate voice for the unborn. And she ripped into Hillary’s incompetence and deceit every chance she had (unlike the men on the stage). If we get a Republican Administration, I hope there’s a place for her in the cabinet.

Definitely will miss her — strong voice and passionate. My hope is that the next Pub president has a spot for her in the Cabinet.

Hats off to those of you who predicted Christie and Carly dropping out. Lucky guesses or did you sense something?

They had bad polling numbers and the votes they received were not large enough.

Last night I predicted Fiorina to drop out first…as her suspension was official (Christie’s has come from a source vs. him personally, I’ll claim my $2 bet as a win on a technicality. 🙂

Handy is on target, and the greater point is it comes down to fund-raising. For GOP candidates, if you’re not in the Top 5 coming out of New Hampshire (either with a Top 5 NH finish or Top 5 polling in SC) you’re not going to make the SC debate (and there’s no kiddie table debate either).

Fiorina had neither Top 5. So next to impossible to gather significant fund-raising just for a chance to sit on the sidelines for the debate, AND get ignored by the press (Fiorina had lowest press coverage in NH anyway). Fiorina does have $5 million in funds still available to her today, but that’s far less than the Top 5, and not enough to boost her into the Top 5 in SC primary voting.

Therefor, for Fiorina no path beyond SC.
No path beyond SC means no contributions FOR SC.
As of last night’s performance, Fiorina was dead. Christie’s path forward has the same fund-raising challenges.

Sad that fund-raising defines politics, but already tonight the talking heads are narrowing the fund-raising race down to only two candidates, Trump vs. Cruz

Another Amnesty proponent goes down in flames. At least she provided some gutsy moments.

Carly is a feminist and used liberal feminist PC weapons.
It didn’t play out for her. She has sand and knows her Middle-East stuff and chopped Planned Parenthood into bite sized pieces and for all that I respect her.

Oh… and a correction to my comment last evening…

Rubio didn’t get any delegates at all.

Now he limps into S.C. a wounded man.

Well said, Professor. Out of the 16 originally running she was in my top 6 and she’s outlasted all but 2 of them.

I’ll miss Carly because of her Fiscal/Small Government Conservatism. Her 1-2-3 punches of 1) Shrinking Government through Attrition (by not replacing Retiring Employees), 2) Zero-Base Budgeting (which will rid the Bureaucracy of useless programs and incompent management) and 3) a Flat-Tax, “where everyone’s of gets gored (and where the IRS can no longer be weaponized against any political group),” was unmatched by ANY OTHER CANDIDATE.

I wish she could have gotten the endorsements of Scott Walker and Rick Perry when they dropped out of the race. That might have been enough to keep her going, but alas a shrewd young Texan pounced on those opportunities.

We know that Trump won’t choose her as VEEP (“look at that face!” – I’m betting on Michael Bloomberg as his partner, whether he runs as a Republicrat, a Democrat-Socialist or an Independent. However, maybe Cruz, that shrewd Texan, will see the wisdom of Carly Fiorina as a credible running mate, that attracts Fiscal/Small Government Conservatives and Liberterians.

Carly, will be missed. She was close with the Islamist. That is not good. She did have a lot of conflicting stories that followed her around.