Zika Virus Pushes Ebola out of the Spotlight

Zika Virus Pushes Ebola out of the Spotlight

Expert predicts up to 100,000 microcephaly cases caused by virus. 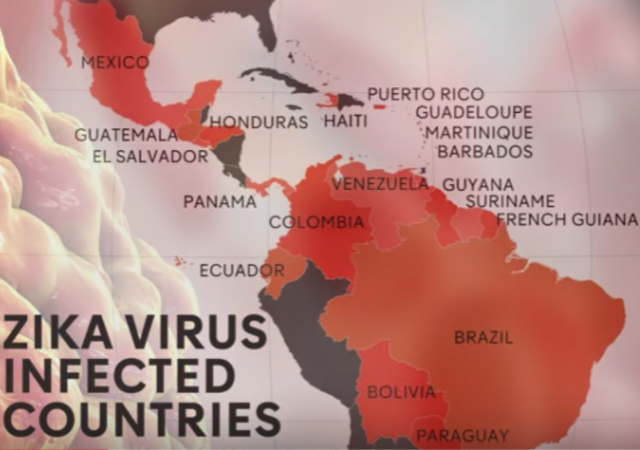 Just as President Obama declared victory in the combat against the Ebola virus, fears about another one are spreading.

Zika virus, which is a mosquito-borne virus that can cause birth defects when women become infected during pregnancy, has hit South America hard and health professionals around the world are now responding to the new infectious disease crisis.

Officials in four Latin American and Caribbean nations have warned women to avoid pregnancy amid concerns over an illness causing severe birth defects.

Colombia, Ecuador, El Salvador and Jamaica recommended to delay pregnancies until more was known about the mosquito-borne Zika virus.

This followed an outbreak in Brazil.

Brazil said the number of babies born with suspected microcephaly – or abnormally small heads – had reached nearly 4,000 since October.

Meanwhile, US health authorities have warned pregnant women to avoid travelling to more than 20 countries in the Americas and beyond, where Zika cases have been registered.

The link between microcephaly and Zika has not been confirmed – but a small number of babies who died had the virus in their brain and no other explanation for the surge in microcephaly has been suggested.

The Zika virus has been known since the 1940’s and was originally identified in a Ugandan forest. The 4000 cases of microcephaly represent a 20 times increase over the number reported in Brazil than in 2014.

Barzil’s poor economy is cited as a root causes for the surge:

“The initial response…was to overlook its importance,” said Dr. Artur Timerman, a leading specialist who is president of the Society of Dengue and Arbovirus, a nongovernmental organization. “It was said that Zika was a poor cousin of dengue, without much relevance.”

Dr. Timerman attributed Zika’s rapid spread, in large part, to Brazil’s economic recession, which he said has weakened the nation’s infrastructure of laboratories and other primary-care services.

Timerman estimates that the eventually tally could be as many as 100,000 microcephaly cases.

Three people in New York have been diagnosed with a case of infection.

Three people in New York — including one from Queens — have tested positive for a mosquito-borne virus linked to severe birth defects in newborns, officials said.

All three came down with the Zika virus after traveling to places outside the U.S. where the ailment has affected thousands. The two other patients are from Nassau and Orange Counties, state health officials said.

No mention is made if any of the infected are pregnant, or what countries were the travel destinations for the three.

Three British travelers have also been diagnosed with Zika, and the situation is summarized by this Channel 4 News Britain video report:

Because of the dramatic increase in the number of cases, health officials in several South American countries are asking women to delay pregnancy, which is proving to be a challenge given the cultural climate.

Women in El Salvador and Colombia are being cautioned to avoid pregnancy due to the potentially dangerous Zika virus, but little access to contraception or abortion and pregnancies from rape leave many women unable to heed that advice, campaigners say.

…In Colombia, which has the second-highest Zika infection rate after Brazil, there are 560 known cases of pregnant women infected with the virus.

Jamaican officials are also advising against pregnancy at this time.

The 2016 Olympic Games are being held in Rio De Janeiro, which is in an area highly impacted by the infection. Olympic officials stress the August games are occurring during the southern hemisphere winter, the mosquito population will be smaller. The officials will also direct efforts to scour Rio’s Olympic sites of stagnant waters that are the breeding grounds for the Aedes aegypti mosquito that transmits Zika…as well as dengue and chikungunya (also epidemic in South America).

In the wake of these developments, the U.S. government has launched an effort to develop a vaccine. Let’s hope one is developed soon, as it appears Zika is going to remain a significant health threat for quite some time.

Cheap and effective. The casualties would number less than the victims of abortion rites and biologically unstable orientations. It is clearly not a viable choice.

Make sure you spray the ISIS Mosquito training camps in Syria and Iraq.

Rachel Carson: The greatest mass murderer in all of recorded history.

But it’s ok, because like all progs and their idiotic policies, her intentions were noble.

My wife’s pregnant and we live adjacent to Latin America in a heavy mosquito area. We’re very scared. I got her some natural oil insect repellant, which will make her feel better, but I know from camping experience that the stuff just doesn’t work very well.

Airport Malaria is a real thing. Mosquitos board planes in Malarial areas throughout the world and live long enough to bite someone in a US airport. I guess workers in airports that receive flights from Zika areas are also at risk.

Get a real insect repellant. Her doctor should be on top of this.

Because border control will keep out mosquitoes?!

If it’s in Mexico, then it will be here soon.

It’s obvious that, for whatever reason, their is a bloom of a subspecies of mosquito and its parasites. We can be proactive about it, or we can have a lot of damaged babies. We know how to stop mosquito-borne diseases. It’s not even very expensive.

Further, we can and should use the most effective tool we have (DDT). A short-term, skillfully targeted program would lead to minimal environmental damage, because not much DDT has to be used, if application is efficient.