Time To Rebuild The Navy

Time To Rebuild The Navy

China’s navy is growing and improving; the U.S. needs to keep pace.

Last week I wrote that Russia’s re-equipped, re-invigorated and rejuvenated navy was flexing its muscles, using new capabilities and taking on greater responsibility to make substantive contributions to Russia’s war efforts in Syria.

As Russia’s mission prospects improve and the U.S. concedes Bashar Assad’s retention in Damascus, Russia now projects to have major ports in the Eastern Mediterranean (Tartus) and the Black Sea (Crimea), making it the dominant native force in Asia Minor.

Meanwhile, 4,500 miles away on the opposite shore of Asia, China’s navy is increasingly challenging U.S. and allied interests in the Pacific and its subsidiary seas.  China’s confirmation last week that it is building its own aircraft carrier for the first time is a major development.

China’s only existing carrier is the Liaoning.  Liaoning was born as the Admiral Kuznetsov in the waning days of the Soviet navy in the late 1980s.  It was later renamed the Riga and left to decay before making a trip to China beset by legal and technical hurdles.  The Chinese refurbished the Liaoning and it began sea trials in late 2011 before being commissioned into China’s People’s Liberation Army Navy (PLAN) in September, 2012. 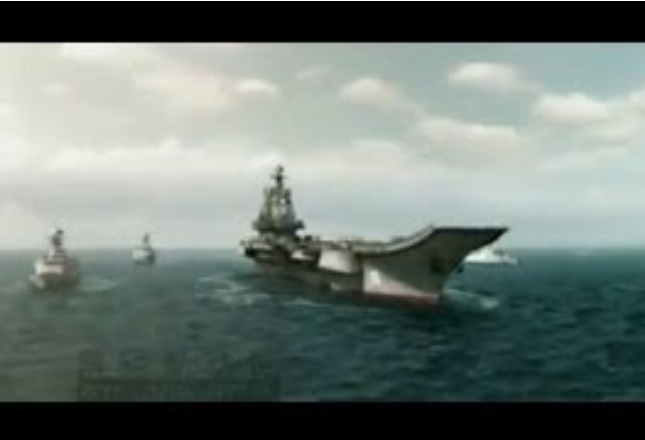 The big news about China building its own carrier isn’t that it will double its China’s carrier fleet.  That is significant, yes.  Much bigger is that China is developing the institutional knowledge, skills, infrastructure and procedures necessary to build as many carriers as it wants.

China ought to be able to improve each individual ship and whole class designs as experienced seamen, builders and designers create a positive feedback loop.  Crews with experience from the Liaoning will be interspersed among the crew of the new ship under construction, and both will be mingled among subsequent crews, each generation providing greater service, knowledge and expertise than the last.

Likewise the experience building this first ship will benefit both the same men and those who help them build the second, as Chinese industry brings its formidable powers to bear.

If China’s acquisition of the Liaoning was the first step in developing a self-sustaining and self-reinforcing carrier capacity, building their own ship is a great leap forward.  Together, China has taken real strides toward moving from a defensive force bound to Chinese shores and the near-abroad, to a true “blue water” fleet that can project around the globe.

As China’s appropriation of the South China Sea continues, its ability to wield its navy efficiently in potential conflict areas grows as well.  China has already completed an air field on an artificial island it built in the Spratlys, a force projection option itself akin to an aircraft carrier and reminiscent of U.S. World War II strategy of leap-frogging air power across Pacific.  Building refueling and resupply depots for the PLAN is sure to follow.

In contrast to this steady stream of advances, the U.S. Navy is backpedaling.  The U.S. counts 272 ships, less than half the Reagan-era peak and down 13 just since 2009.  The Navy has already abandoned its plan to grow back to the 308.

According to Seth Cropsey, director of the Hudson Institute’s Center for American Seapower:

Secretary [of Defense Ash] Carter’s plan implies that the deterrent effect of a constant U.S. presence in the world is less important than the Navy’s ability to fight and win wars with the advanced weapons he favors. That assumption is mistaken. We need both the ability to be present, which demands more ships than we have, and the related power to win a war if deterrence doesn’t work. Even the Navy’s now-endangered plan for 308 new ships was far below the approximately 350 combat ships needed to achieve this aim.

Cropsey argues for bringing the Navy back up to that 350 target.  Cropsey’s shopping list includes everything from more of our own aircraft carriers “so that we could maintain at least one carrier strike group in the West Pacific, the Persian Gulf, and return powerful U.S. naval forces to the Mediterranean,” to supply ships to “provision a larger fleet in the West Pacific and return to the Mediterranean in strength.”  More submarines, amphibious craft, large and small surface combatants, and high speed, unarmed ships – more or less all of the mainstays.

Growing the Navy by almost 80 ships is no small feet, particularly when you are adding items like aircraft carriers and nuclear submarines.  By Cropsey’s calculation, it would require “an annual $24 billion shipbuilding expense. That means a 45% increase of the current $16.5 billion shipbuilding budget, or an added $7.5 billion yearly to the shipbuilding portion of the Navy’s budget to reach a 350-ship fleet by 2045.”

Assuming the Obama Administration cannot be prevailed upon to do anything to buttress the U.S. military, it will fall upon the next commander-in-chief to make the necessary, if difficult, decisions.  Obama’s catastrophic foreign policy has shown beyond question that U.S. disengagement from the world breeds disorder, violence and danger to American interests both abroad and at home.  Recovering lost ground will require determination and the will to rebuild and redeploy the military.

…and to have a CIC who will use that Navy as it was meant to be used.

As a retired Naval officer, I bow my head in shame at what Obama has done to my USN.

Yep, it matters not how many ships one has in the Navy when they remain unused.

This is a feature, not a bug, in Obama’s view. He thinks the US has been a force for evil, suppressing and colonizing all those fine, other countries. God help us all.

God helps those who help themselves.

I’m pretty much convinced that any meaningful improvements to our armed forces are going to have to wait until Obama is out of office. The odds of him allowing any to go through are about as close to 0% as you can get.

0bama vowed to ‘fundamentally transform” the USA and it’s the only time he’s kept his word.

No one bothered to look into the details of his plan or intended scope — as a weakened, bankrupted, overrun, infested, corrupt, fascist state is what he and Iranian Valjar had in mind all along.

How would you like go into battle on the USS Caitlyn Jenner?

aka The Love Boat.

Technically, friendly ships are ‘she’ when you’re referring to them, so even if the ship was the USS Bruce Jenner, she would still be feminine.

It really doesn’t matter what the ship is named, as long as it can kick tail in a fight. With modern warship design seeming to slip towards ‘Can do anything, but can’t do it well’ capacity, we may see ships crammed full of expensive gear to engage any surface/air/subsurface threats, but no political will to do anything at all with it.

Also, remember that the Chinese Navy and the Russian Navy do not have any combat experience. Their navies are mostly conscripts and very few actual seasoned sailors who have any specific experience. They do not train as our Navy trains. You can also assume that wherever their navies go, our submarines are following quieter than a field mouse and totally undetected.
They do not think for themselves and are very centralized. A Colonel/Captain cannot make decisions except to follow the orders they’ve been given.
I agree that we need to keep our military equipped. In fact the maintenance and upkeep of the military is actually one of the main things the President is constitutionally required to do.
I’ve worked closely with Russian military folks for a number of years (before the Obama reset) and I can state that they are good and decent men who love their countries and the majority of them hardworking and loyal. I don’t believe any of them want to go to war against the U.S. not only because they would be defeated but because, at least they used to, like the U.S.
I can also state that they never make a decision they have not been specifically directed to make.