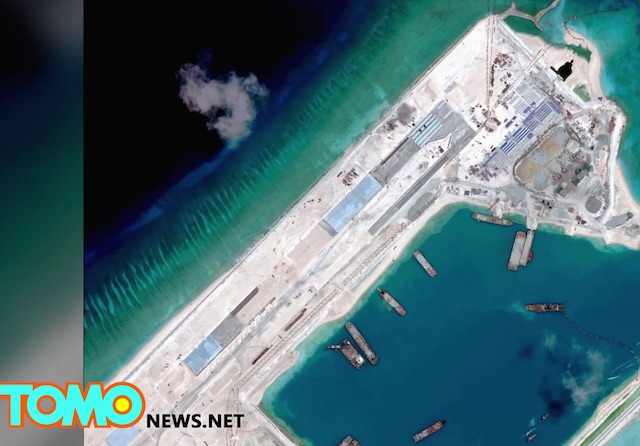 China performed a series of test flights for the first time Saturday on a newly constructed runway in the South China Sea. The 3,000 meter airstrip sits atop a Fiery Cross Reef, an artificial island constructed by the Chinese in the Spratly Islands region. The airstrip is long enough to accommodate a variety of aircraft including 4-engine jets, military transport planes, and the nation’s most advanced fighters. A spokesperson with the Chinese Foreign Ministry claimed a civil flight test was performed with civilian aircraft.

The Spratly Islands are one of the world’s most highly contested regions and are claimed by Vietnam, China, and Taiwan. They are also claimed in part by the Philippines, Brunei, and Malaysia. Responding to China’s activities on Saturday, Vietnam launched a formal diplomatic protest and it is expected that the Philippines will follow suit. Vietnam’s response comes after an improvement in American-Vietnamese relations as China’s presence in this region becomes a shared threat to both America and Vietnam. Defense Secretary Carter’s vocal opposition to China’s activities has further emboldened countries bordering the South China Sea.

Despite American opposition, China presses on and, as with most of its actions, remains extremely opaque. Officials continue to insist the nation’s activities and terraforming fall completely within its sovereignty. Aerial images of the islands show structures resembling water purification units, housing structures, a storm free anchorage, as well as manmade harbors.

To military analysts, Chinese intentions couldn’t be more clear. China is militarizing the islands. On Fiery Cross Reef, the People’s Republic has essentially constructed an aircraft carrier atop artificial land. Images indicate that similar projects are underway on other terraformed islands in the South China Sea. Whether China formally declares it or not, Fiery Cross Reef will function as a forward base military installation.

Additional evidence pointing to this can be seen after taking a closer look at the flight tests China performed on Saturday. The aircraft used for Saturday’s flight tests was a four-engine jet transport aircraft, a Chinese variation of the Russian IL-76. The aircraft performed a series of short landings an short takeoffs on the long runway. Why would anyone perform short landings and takeoffs with a transport plane on a 3,000 meter runway? In order to simulate landing on a crowded, active airstrip.

With recent events, it is likely that we’ll soon see military aircraft dotting this airstrip. Whether or not China formally establishes an Air Defense Identification Zone around Fiery Cross Reef remains to be seen.

China may call it a carrier but one single Tomahawk Missile can end the runway for quite a while. Also it’s location never changes so it can always be targeted with no intelligence required. As a military asset it isn’t much.

VietNam could probably take it out.

• Become a subject of tyranny

That about covers it, eh Barack?

While we didn’t use terraforming the US and Japan did the same thing across the Pacific during WWII, turning islands into bases for bombers. It allowed us to pound the Japanese into submission and eventually drop 2 atomic bombs. I wouldn’t underestimate the Chinese intentions or willpower. But I would underestimate Obama’s response.

Right. Johnston Island, though not really much of a factor in WWII due to its location, was effectively made into a man-made aircraft carrier (image here) by the U.S., with a runway of length 2500 meters. It is actually one of the 3 designated (by treaty) nuclear test sites of the U.S.