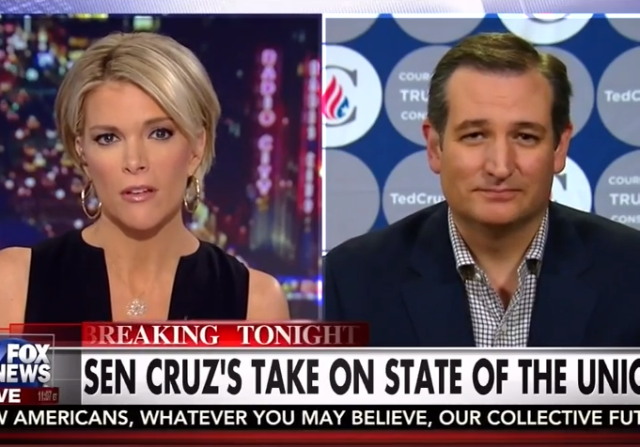 Shortly after Obama’s state of the union address last night, Ted Cruz appeared on the Kelly File and mercilessly lambasted the president for omitting recent developments in Iran as well as terror attacks like the one in San Bernardino.

President Obama’s final State of the Union address was more like “a state of denial,” Ted Cruz said on “The Kelly File” tonight.

The Republican presidential contender told Megyn Kelly that he’s not surprised that the president didn’t mention ten U.S. sailors held by Iran during his speech.

He said that the fact that Iran felt comfortable seizing U.S. sailors and ships goes to show the “incredible weakness” of Obama’s foreign policy.

Cruz added that as out of touch as Obama has been on the economy and jobs, he’s been even worse on national security.

Cruz and Kelly go on to discuss other topics like his love/hate relationship with Trump.

On a related note, David Brooks of the New York Times, who once said that Obama deserved credit for the neat crease in his pants, has decided that Cruz isn’t sufficiently Christian:

The Brutalism of Ted Cruz

Ted Cruz is now running strongly among evangelical voters, especially in Iowa. But in his career and public presentation Cruz is a stranger to most of what would generally be considered the Christian virtues: humility, mercy, compassion and grace. Cruz’s behavior in the Haley case is almost the dictionary definition of pharisaism: an overzealous application of the letter of the law in a way that violates the spirit of the law, as well as fairness and mercy.

Traditionally, candidates who have attracted strong evangelical support have in part emphasized the need to lend a helping hand to the economically stressed and the least fortunate among us. Such candidates include George W. Bush, Mike Huckabee and Rick Santorum.

But Cruz’s speeches are marked by what you might call pagan brutalism.

He is so alien to Christianity, who is he to even discuss this topic?!?!

This is ALSO another apparently coordinated attack from the Left and Duh Donald.

No not at all. He should be challenged vigorously until he allows everyone to see the citizenship papers for him and his mom. Little Rafael is hiding something.

‘Pagan Brutalism’ sounds more like an apt description of ISIS.

Liberals — NYT, Brooks, et al — will tell you who they fear will interfere with their agenda.

State of Denial describes it well. And the only NY Times columnist worth reading is Ross Douthat. I keep wondering how long they’ll keep him.

Really Aleister? David Brooks? You must have been really desperate for some filler for this post. 🙂

“State of denial” sums up the Obama Presidency.

Barack Obama will be remembered in history as the first Black President and that’s it. But that’s not a merit to attribute to him.
That merit belongs to the United States as a nation, to Americans as People. By electing Obama (the first time) the American people sent a clear message: This is indeed the land of opportunities, opportunities for ALL.
But Obama just blew it.
He was given a change to achieve greatness. He was given a chance to erase the last vestiges of division, to finally unite us ALL. What did he do?
He joined the despicable loud voices that want to divide us. He catered to our enemies and betrayed our allies. He lied and continues to do so, because he’ll never admit he’s a failure.
Barack Obama was a mistake.
A big one.
Maybe the biggest ever.
That’s his legacy.
But cognitive dissonance is a biatch.

Barack Obama will be lucky if the only thing he is remembered for is being the first black President.

“Cruz is a stranger to most of what would generally be considered the Christian virtues: humility, mercy, compassion and grace. Cruz’s behavior in the Haley case is almost the dictionary definition of pharisaism: an overzealous application of the letter of the law in a way that violates the spirit of the law, as well as fairness and mercy.”

No humilty, compassion and grace from Brooks? No fairness and mercy for Cruz? Who’s throwing stones at Cruz?

Brooks obviously doesn’t go to Cruz’s events, listen to his speeches, or even remotely investigate who Cruz is. If he did, he’d never dare to say such nonsensical things about him.

Brooks is either making things up (no surprise there!) or taking TPM and other progressive-leftist talking points and sound-bites to make his inaccurate, even slanderous, “assessment” of Ted Cruz’s faith.

Is Brooks a Christian? What are HIS credentials?! What qualifies HIM to know anything about Christians, our faith, or what the Bible teaches? Hmmmmmm?!?!

Progs love to talk about compassion as if it was tied to a brand they owned called Jesus.

The Deemocrats are the ones who shunned God from their party platform and then added Him later as a PR stunt.

Given Zero’s tissue-thin resume, I suppose “creased pants legs” counts as some sort of compliment to those who harbor low expectations. But people who are impressed by creased pants legs are not people whom I take seriously. It’s pathetically laughable that such an inane observation would pass for wise political punditry.

Seems to me making such an observation constitutes racism by lefty standards. Why would one be surprised and pleased that a black man had dressed well?

He is also “clean”. Dimwit Biden told me so.