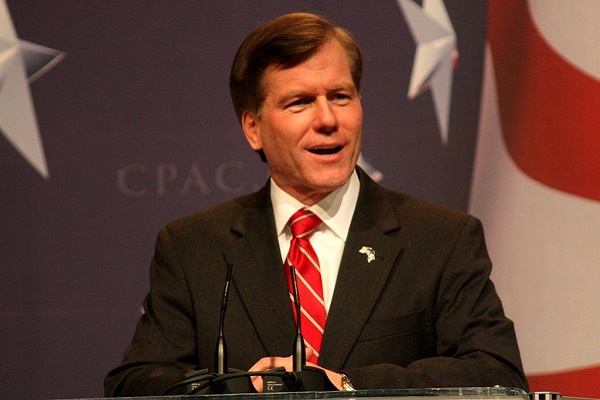 Former Virginia governor Bob McDonnell was indicted back in January of 2014 for accepting gifts in exchange for political influence, and now the Supreme Court will be reviewing his case.

The McDonnells, who were convicted in 2014, were accused of intervening with state officials on Williams’s behalf in exchange for $177,000 in loans, vacations and luxury goods. The former governor was sentenced to two years in prison; Maureen McDonnell received a year and a day.

. . . . The Supreme Court will decide whether former Virginia governor Robert F. McDonnell was rightly convicted of corruption for his efforts on behalf of a businessman who bestowed money and gifts on the governor and his family.

The court announced Friday that it would intervene in the long-running saga of McDonnell and his wife, Maureen, and the case provides the justices a fresh opportunity to define what kind of political conduct crosses the line into criminal behavior.

McDonnell issued a statement in response to the Supreme Court’s announcement.

After the Supreme Court’s announcement Friday, McDonnell issued a statement thanking the court for accepting the case. “I am innocent of these crimes and ask the court to reverse these convictions. I maintain my profound confidence in God’s grace to sustain me and my family, and thank my friends and supporters across the country for their faithfulness over these past three years,” he said.

McDonnell’s attorney noted the import of the case for politicians on both sides of the aisle:

McDonnell’s attorneys had told the court that if his “routine political courtesies” to Richmond businessman Jonnie R. Williams Sr. could be construed as felonies, it would make all politicians vulnerable and arm federal prosecutors “with a frightening degree of control over the political process.”

WaPo also notes that the Supreme Court has “limited the legal scope of what is considered public corruption”:

In campaign-finance cases, including Citizens United v. FEC, the court has noted that mere political favors for contributors do not amount to corruption.

And in a case involving former Enron executive Jeffrey Skilling, the court scaled back one of federal prosecutors’ favorite tools for pursuing corrupt politicians and self-dealing corporate chiefs. The court narrowed the definition of what constitutes depriving the public or a company of a leader’s “honest services,” essentially saying it had to involve accepting bribes or kickbacks to be criminal.

I can think of one person who will be watching this case very carefully.

The thing that bothers me is that, in my experience, even if a politician is honest, he will be surrounded by the kind of people who think of themselves merely as sharp operators.

The well-deserving of Pillory Clinton should take note, but not on a private server.

The problem here is that if he gets away with this, the standard for public corruption will likely ultimately be that there be an actual transaction or conspiracy, and not merely the quid and the quo. Right now, it looks like they just have to show quid and quo, and the jury can assume quid pro quo, and, thus, public corruption.

The absurdity here is that he is a piker when compared to the Clintons. We are talking tens of millions of dollars, if not hundreds, that were shuffled either to Bill’s speaking fees, or the Clinton family foundation that now includes Hillary’s name, in apparent trade for political favors by the State department when she was its boss. At least an order of magnitude, maybe several orders, more brazen and lucrative then the McDonnells.

There are at least 125 FBI agents working on all aspects of the Hillary investigation, now expanded to include her influence peddling scheme.

The FBI doesn’t devote that level of resources if they aren’t certain there are multiple serious chargeable crimes to be found.

A couple of differences. First, the investigation got started, and probably still primarily involves email abuses. And, secondly, the McDonnell angle is fairly recent, presumably after the FBI started down the political corruption trail. That said, I point out below that I was probably off on a tangent here, since Hillary was an executive branch employee at the time, and not an elected politician, as McDonnell was.

McDonnell is a Republican, so his conduct will be found to be illegal and unconscionable.

Hillary is a Democrat, so it will somehow be defined that for her the same conduct or worse is within her perks of office.

The law in this country depends on who is applying it, and to whom it is being applied.

Rethinking things – the McDonnell argument is essentially that politicians do horse trading, etc. as a regular part of their business, and everyone is just helping friends. Not sure if I buy it, but they do apparently have a chance. But, Hillary was not actually a politician at the time, but rather a government employee. Or, more accurately maybe, she wasn’t in a political office at the time, but rather, was an executive branch employee. Which means to me that she should still be on the hook even if the McDonnells get off, because she would have to be judged on the employee scale, and not the politician scale.