CNBC: US poised for recession worse than 2008’s 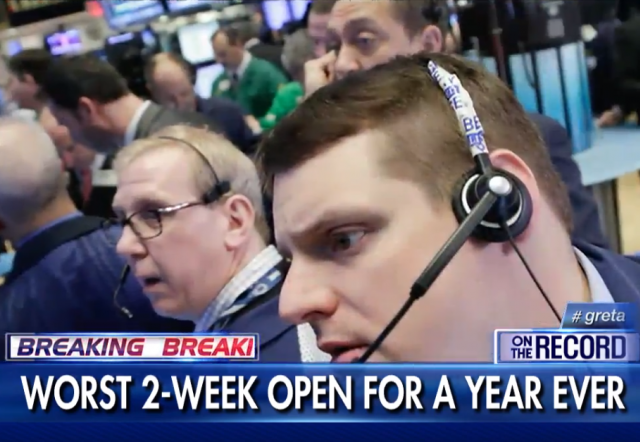 During his State of the Union address, Obama asserted that anyone portraying the American economy as bad was “peddling fiction“.

Perhaps he can explain why our stock market was outperforming expectations . . . in terms of how much it dropped?

“Oil is the root cause of today,” said Dan Farley, regional investment strategist at the Private Client Reserve at U.S. Bank. “People are uncertain, and when they’re uncertain they’re scared.”

Because our economy is tied to the global market, it is worth noting that the Royal Bank of Scotland just issued a dire warning to its investors that can be summed up in two words: “Sell everything”.

RBS urged investors to sell everything amid warnings that oil prices could fall to the lowest level in 17 years which may spark a meltdown as severe as the 2008 financial crisis.

The bank told investors stock markets could fall 20 per cent this year as it urged them to sell with a stark warning, saying: ‘In a crowded hall, exit doors are small. Risks are high.’

. . . .  Analysts warned of a ‘cataclysmic year’ ahead for investors and the global economy, BP said it would have to slash 4,000 posts around the world including 600 in the North Sea.

These developments align with a recent CNBC analysis that we are posed for a recession that will be even worse than the one in 2008:

…[A] recession has occurred in the U.S. about every five years, on average, since the end of WWII; and it has been seven years since the last one — we are overdue.

Most importantly, the average market drop during the peak to trough of the last 6 recessions has been 37 percent. That would take the S&P 500 down to 1,300; if this next recession were to be just of the average variety.

But this one will be worse.

A major contributor for this imminent recession is the fallout from a faltering Chinese economy. The megalomaniac communist government has increased debt 28 times since the year 2000. Taking that total north of 300 percent of GDP in a very short period of time for the primary purpose of building a massive unproductive fixed asset bubble that adds little to GDP.

Given that the recovery from 2008 has been the weakest on record, these developments are troubling. 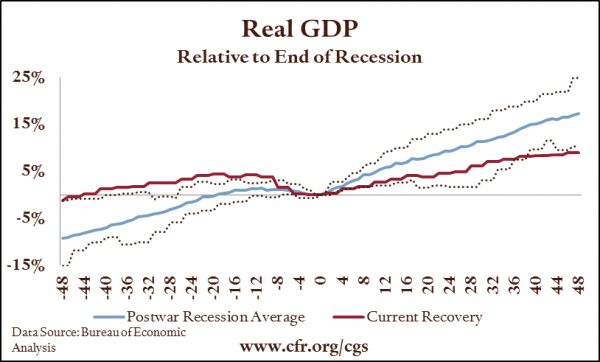 During his State of the Union address, Obama peddled more disturbing fiction than G.R.R. Martin. The best analysis concerning the American economy might actually be summarized by this famous line from Martin’s Game of Thrones.

I don’t buy RBS’ recent dire warnings to sell everything.

If you are long term investor (401K, IRA), knowingly reallocate investments based on your investment plan for the long term.

Don’t sell based on a frenzy. Sell when you are ready and based on your investment goals.

For the broken link above:
http://www.morningstar.com/content/morningstarcom/en_us/model-portfolios.html

Think long term, not quick escape. And, there are many cheap buys right now, buys for companies that are major going concerns.

Obama’s current fiscal policy (executive branch regulations/orders ad nauseum) and the Fed’s Keynesian monetary policies have created a large amount of uncertainty, uncertainty which is an intrinsic characteristic of socialism.

If you have the courage (and extra cash), follow the old adage of When everyone is selling, you should buy.
There are good companies that will weather the storm. Buy them low now, you can sell them at a good profit later.

with the government busy picking winners and losers, that’s a mug’s game these days.

Remember too the adage about bear markets predicting nine of the last five recessions.

So, buy low and sell high, then?

What the Fed has done since 2009 amounts to grand theft. They created money out of thin air, bought assets and lent at low interest, running up a several trillion dollar “balance sheet.” There needs to be a Constitutional Amendment to stop this. It is taxation without representation because it uses the value of our cash and work, and when they lose, as we now see, we lose, and our kids lose.

It’s like this: suppose you “take” a pile of cash from your neighbor unbeknownst to him, do a margin investment and make a bigger pile, and restore your neighbor’s cash. That’s a crime. But that’s Fed policy.

Has everyone just collectively forgotten that the Royal Bank of Scotland is still majority owned by the government of the United Kingdom? I haven’t been seeing that mentioned. To say the least, the analysts have interested parties looking over their shoulder, looking for any sign of excessive happy talk.

we’re heavily into art and commodities

how DARE the racists at the RBS contradict our awesome Present-snit Obola?

One thing does seems different from the slowdowns in 2001 and 2008 Both of those were in art the result of a huge distortion in one segment of the economy. The dot.com craze combined with almost everyone who relied on computers investing in new technology because of Y2K fears created huge distortions in the market for technology. In 2008 a classic speculative bubble burst in residential real estate. The softness this time is more widespread.

The problem with Y2K was Greenspan flooded the market with cash to avert a crisis, which extra money went largely into equities. But then he tried to squeeze it back out too quickly. He created the second bubble and then burst it.

DJI is about halfway into a correction; how long the Bear goes on is anyone’s guess but there is unlikely to be any tax or regulatory relief until Obama is out of office in another year and 3 days.

It may go into a rout, but +the passive investor always beats the active trader.

If you didn’t retain that from B-school, ask for your money back.

I love how these soothsayers come out of the woodwork after the panic, as though it’s the “fundamentals” that told them all of this.

Did the “bigger fools” theory of over valued stocks just collapse? Not likely.

More likely- the rout has these jokers in a frizzy.

I recently moved all my I-bond cash into the market. It was a small part of my portfolio, but over a decade the growth was abysmal compared to the DOW, S&P and NASDAQ.

When making that move- I pondered WHY ???? China would be buying our debt as opposed to buying into their own economy. Our debt is an awful investment. THAT my friends doesn’t add up.

The Federal Reserve was never supposed to try to control the stock market, but they openly admit to that now. They are “trapped” as they pulled all the rabbits out of the hat, then started pulling fake bunnies, like QE and ZIRP. With all that “stimulus” they did see markets pushed higher, but not because the economy was booming.

“Buy the Dip” has been the long held motto of Wall Street, but the sophisticates at Goldman Sachs were selling housing stocks short as they were selling long to their customers.

To me Greenspan was correct in the early 90’s about irrational exuberance. But all his policy and that of the fed chiefs after him have been to facilitate more of the same. Perhaps we are seeing the end of fed control, if/when they take back their 1/4 point and bring out QE4, and the market still tanks.

But I wouldn’t be surprised if they tried to juice the markets with QE4 right before the election. The government spending has been hidden by the fed’s easy money policy, taken to extremes now with the QEs and zero interest rate policy for 7 years. (yeah, I know it’s not quite zero)

The 10% “correction” or 20% “bear market” have been rules of thumb, but Obama has been fundamentally transforming America, so I think bigger losses are probable given all the manipulation. We can’t keep borrowing and “printing” forever, and the hangover could be long.