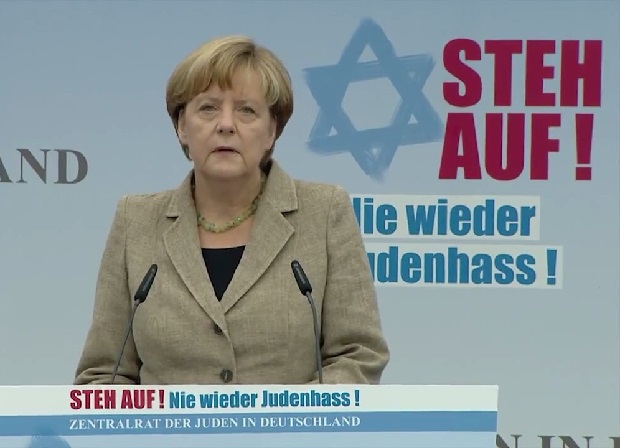 Shocked by the wave of violent anti-Semitism in Germany following the Gaza conflict of 2014, the Central Council of Jews, apex body of Jewish organisations in Germany in called for the rally “Stand up! Never again anti-Semitism!” on September 14, 2014. The event was attended by German Chancellor Merkel, President Joachim Gauck and other senior government ministers.

Speaking under the banner of “Never Again”, leader of the Jewish community, Dr. Dieter Graumann said, “enough is enough” and “we do not want to be compelled to gather here again in two or three years’ time.”

The state ceremony graced by Chancellor Merkel and her entire cabinet is barely an year only and here we are again. 70 years after the end of Nazi Germany, the small Jewish community in Germany doesn’t feel safe in Germany anymore. In recent months, prominent community leaders in Germany have urged Jews to avoid wearing religious symbols in public and to avid “districts with strong Muslim populations.”

According to the spokesperson of the Jewish community in Hamburg, Daniel Killy, the current lawlessness in Germany has led to a dangerous situation for the Jews.

“No, we are no longer safe here,” Killy was quoted be the Jerusalem Post. He said the disintegration of state power, excesses of the extreme right-wing, the loss of political credibility, and “the terrible fear of naming Islamism as such” have contributed to an insecure environment for Jews. Hamburg’s Jewish community has nearly 2,500 members.

Germany has absorbed over one million refugees from mainly Muslim-majority countries.

German Jewish leaders have warned about rising anti-Semitism because the refugees are socialized in countries that are steeped in hatred of Jews and Israel.

The detailed taggeschau.de [public funded broadcaster] report, which was authored by Patrick Gensing, an expert in extremist ideologies, wrote that anti-Semitic sentiments have diverse manifestations in Germany. He cited studies that point to “historical defensive guilt [about the Holocaust], obsessive criticism of Israel, National Socialist racism, Muslim anti-Semitism [and] Christian anti-Semitism.”

Gensing wrote about a “wave of hatred” at the “hate-filled demonstrations against the Gaza War” in 2014. An Israeli couple were attacked during that period. Also, three Palestinians attempted to torch a Wuppertal city synagogue – one that had previously been burned by Germans in 1938. A local court sentenced the Palestinians to probation and stated that the act of arson was not anti-Semitic because the men sought to draw attention to the Gaza war.

According to Jerusalem Post, last year about 200 German Jews — made Aliya — moved to Israel, a high number considering that majority of the Jewish population in Germany is older in age.

Almost all Jewish institutions in Germany get round the clock police protection or have to employ private security guards. The tiny Jewish community in Germany, always a prime target of Neo-Nazi violence, is now increasingly under attack from Islamists. A prominent Rabbi in Frankfurt told German broadcaster DW that “these days he is less fearful of rightwing extremists and more of Islamic fundamentalists.”

European history shows that Jews are the proverbial canary in the continental coal mine. Like the dying canary warned the minors of a toxic leak, the prosecution of the Jews has always been an ominous indicator of an impending disaster.

As antisemitism in Germany again touches historic heights, it is time for Germans as a people to unequivocally demonstrate that they have learned the lesson of history. They may chose to ignore this screeching call of history at their own peril.

Video: Journalist and author Tuvia Tenenbom talks to i24News about the present-day Antisemetism in Germany, July 2014

[Writer is an Indian journalist based near Cologne, Germany]

“Why, yes, I do sorta admire Hitler. Why do you think I brought his custom-made chair back to the Chancellor’s office. And yes, I do have a copy of the newly published Mein Kampf on my night stand. But you don’t need to mention that to anyone.”

There is no hope for Germany. I hear this morning that those who speak out on the Muslim invasion are in Germany are subject to arrest. The German government is sponsoring the attacks that will come. It is time for Jews to bail, not only out of Germany; but also out of Europe. There ARE NO SAFE PLACES THERE.

I’ve already spoken with family living in Paris.
They are finalizing arrangements to leave by summer.

This is not a home-grown problem.

“…the refugees are socialized in countries that are steeped in hatred of Jews and Israel.”

German christians and agnostics are in danger, too, as shown by the recent incidents on New Year’s Eve. I’ve yet to hear that any of the women who were mishandled were accused of being Jewish.

Amazing these morons focus on hating Jews, when their country is being overrun by and their woman raped by a literal sea of radical Muslims — a disaster is enabled by their own non-Jewish leadership.

If Jews ran Germany, it’d be a giant Israel, and likely the most financially powerful and scientifically advanced nation on earth.

But, German leaders have chosen. What’s next? Prayer rugs with swastikas on them?

George Soros’ open society and Mark Zuckerberg’s pro immigration foundation are big financial backers of the amnesty push. If the community is not going to unite to condem these wreckers, then it’s an obstacle that must be overcome before the problem can be solved.

George Soros? You don’t mean the same virulent anti-American progressive bent on the destruction of America, do you? If so, you may want to look at his buddy Donald Trump. Millionaires with money should get what they want in Trump’s world, and that includes someone’s home. Eminent domain, thinks Trump, SHOULD be used to kick old ladies out of their family homes to make a limo parking lot.

As a private citizen he used his crony and political connections to get eminent domain applied in NJ, and it worked, all but ONE lady held out and stood her ground. Trump didn’t get her home, and though today these same people try to explain it away, the root problem exists: Trump believes that nothing belongs to you. It can be bought, traded, taken by government force. He needed a limo parking lot after all!

Racketeering? No worries, Trump and Soros were named in the same racketeering suit (among others), and whom did Trump “deal make” with to get his Chicago Trump towers off the ground? Yep, Soros.

Add to that Trump’s stated belief (already! #WakeUpAmerica) that “national security” trumps privacy, his clear belief that he can do and think no wrong (he doesn’t need you sweaty unwashed masses once in office–get it yet? Look at how quickly Obama dismissed his admiring hordes.

Disagree with Trump (or Obama, for that matter), and YOU are the “dummy” and the “bad guy”), and his latest attack on the 10th Amendment regarding federal land grabs, and why WHY is ANY conservative supporting this wanna be tyrant? Do you honestly think that someone who won’t listen to ANYONE will listen to YOU? Do you want a president or a dictator?

Just one man to “fix” decades of issues from the public to the private, from the cultural to the socio-political, from the common sense to the patently absurd. One man to do all that.

That’s a tall order, and I strongly distrust–after 2008–any cult-like rabid following. In some ways, Trump’s supporters are more off-putting than Trump himself. Deaf, dumb, blind, apparently illiterate since they clearly didn’t read even ONE of the NRO articles they bashed, this is not a crowd who inspires unity and “making America great.” This is a crowd blindly following the Pied Piper . . . and it won’t end well. Bookmark this comment . . . Should Trump win, I’ll want to refer to it in a couple years.

the *persecution* of the Jews