The likely outcome? Our security climate will worsen. 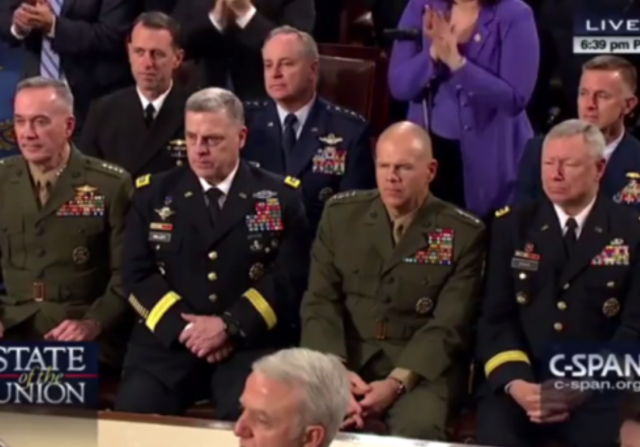 One image I will not soon forget from the recent State of the Union were the grim faces on the Joint Chiefs of Staff.

Though it may be the tradition of our military to be stoic during such occasions, the latest order probably adds to their troubles considerably:

As the Obama administration focuses on a larger effort to push its climate change agenda, the Pentagon will now “address the impacts of climate change.” This includes engaging in “deliberate preparation, close cooperation, and coordinated planning” to “improve climate preparedness and resilience,” according to the directive.

I have long challenged the bad science and baseless assertions of eco-activists. However, I turned to military history expert Barry C. Jacobsen for his opinion about how chasing after “climate change preparedness” would impact what actually should be the top priority for the Pentagon: Military preparedness.

It’s reasons like this that make gauging our military strength vis-à-vis our competitors around the globe, based on how much we spend v.s. what they spend, an inaccurate measure. The Chinese and Russians don’t burden their military budgets with [items] like this. When the Pentagon has to spend time and money on such nonsense, it makes all of us less safe and our nation less secure. This is time and money that should be spent on training, salaries, retaining our personnel, and upgrading our weapon’s systems.

Climate change may, or may not be man-made. We may, or may not, be able to do something to alter whatever changes in the climate are coming. But that isn’t the issue. Whatever the Pentagon does, it won’t change that. There mission is not to stop global climate change (and predictions of dire consequences in the next 60 years). It is to prepare to fight or deter America’s enemies. That mission is their only mission. This takes time and money away from that mission.

We have just lost 12 Marines in a tragic helicopter class. A plane aiding in the search for those was reportedly hit with a laser, forcing it to alter its course. Will be have the money and resources to track down what went wrong with the helicopter and who is responsible for the laser hit on the rescue craft?

The Obama administration has diverted the mission of pretty much every agency, and there have been significant consequences. As an example, the EPA is the regulating bodies leading the charge against climate change.

The state of New Mexico is now suing the agency, because of its involvement with the Animas River Spill.

New Mexico plans to sue the federal government and the owners of two Colorado mines that were the source of a massive spill last year that contaminated rivers in three Western states, officials said Thursday.

The New Mexico Environment Department said it filed a notice of its intention to sue the U.S. Environmental Protection Agency over the spill, becoming the first to do so.

Michigan Governor Rick Snyder issued a sweeping apology to the residents of Flint for the lead-contaminated water supply.

On the other hand, the EPA and the bureaucrats who delayed taking meaningful action after learning about the scope of the problem in Flint remain silent and continue to fly low under the media radar.

The EPA, the agency that is most relevant to the environment, is so burdened with its bureaucracy and rules that it can no longer fight pollution effectively. If the EPA isn’t meeting its original mission goals in this mad battle against climate change, then how can out military be expected to do so?

Why should our military be diverted from its primary task: Defending our country and its citizens from its enemies?

In the past 6 months, the American military has been forced to address a hacking by Russia,seizure of 2 naval craft by Iran, and Chinese military expansion…for starters.

In one year, we will be getting a new Commander-in-Chief. Hopefully, the new one will be more interested in having the Pentagon focus on our security climate.

Oh for the love of God! This corrupt, know nothing, do nothing, pure waste of oxygen Administration has crossed the line! The world is going to Hell in a handbasket, al-Chicagi is emasculating the military and now we have to ‘worry about global warming’ rather than REAL threats (such as al-Chicagi himself)?

Stop the world, I want to get off.

Virtually the entire federal government has been politicized beyond recognition.

“Virtually the entire federal government has been politicized beyond recognition.”

Has my vote for the best post of the year!

Perhaps the Pentagon is planning a Winter conference at some tropical isle (weather channel indicates a good time to do that now). I think the real worry will be a pack of climate scientists going to prison for U.S. Criminal Code §1343 (wire fraud) because a Conservative president will not protect them from prosecution.

But who will save the planet from man-made stupidity?

Wow. An army of meteorologists?! “Are those climate campaign isobars on your chest, General?”

Better yet: who better to take on the world’s need for “climate preparedness and resilience” than Bruce Willis? Call him in from the oil rig. He’ll save the planet one drill bit and one smart ass remark at a time.

Trump will stop this nonsense his first day in office

You don’t change the culture of a command structure on a dime, anymore than you stop a mega-tanker.

And I haven’t seen anything in T-rump that would really object to the culture.

Get together the sergeants in the combat branches. Add any sergeants who’ve seen immediate combat (i.e. guns, not IEDs or artillery) at least three times. Ask them which officers major or above should be kept or reacquired (that is, any officers who’ve resigned or been discharged to be offered a commission at the highest rank they formerly held.) Then ask them which officers below the rank of major should be removed immediately.

Trump wants to be Commander of Climate. He will build a wall to keep climate out and make China pay for it.

(notice how all Trumpians project their hopes onto the next Hopey and Changey guy?)

Of course he would. So would Cruz, Rubio, Christie, Fiorina, Bush, Kasich, etc., etc. Any non-idiot would. This hardly paints a halo around Trump.

“assess and manage risks associated with the impacts of climate change,”

that’s easy: there is no climate change, other than the four seasons, so there’s no risks to asses or manage.

Wow. An army of meteorologists?! “Are those climate campaign isobars on your chest, General?”

Meanwhile, in the South China Sea, China is pouring thousands of tons of concrete onto a live reef, to create an artificial island to launch military operations. Could the Pentagon address that environmental catastrophe before it results in lots of dead Americans?

Well, just fuck the joint chiefs. They’ve all got thirty or more years in–their rather-substantial retirements are set–and not a one of them has resigned in protest.

Weasels. Each and every one.

The downside of a resignation in protest is that your replacement, and a replacement for his current position, and so on down the chain, are selected under the current administration.

To the Joint Chiefs of Staff,

One year from today Obama will be nothing but a very, very nasty memory! Find bunches of red tape and just ignore what ever the White House tasks you with.

Well, it could be worse. Obama could have tasked NASA with climate change and the military with raising Islamic self-esteem.

But give them time.

Climate change over one day, one year, an arbitrary period of thirty years? Climate stasis is a fantasy.

Pick one: Glacial Interstitial or Ice Age.
Warm is good.