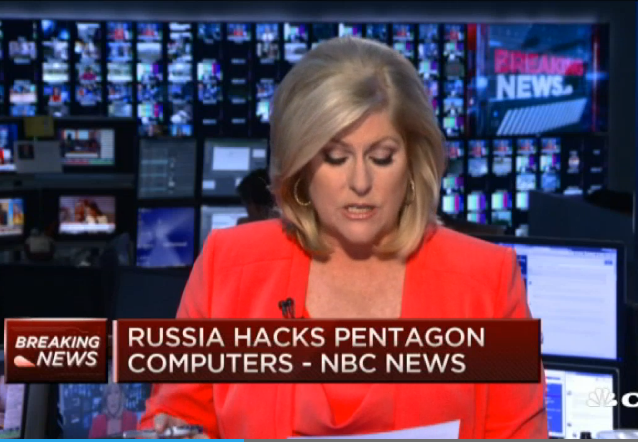 After the Office of Personnel Management Chinese hacking, it seems that almost no government system is secure.

U.S. officials tell NBC News that Russia launched a “sophisticated cyberattack” against the Pentagon’s Joint Staff unclassified email system, which has been shut down and taken offline for nearly two weeks. According to the officials, the “sophisticated cyber intrusion” occurred sometime around July 25 and affected some 4,000 military and civilian personnel who work for the Joint Chiefs of Staff.
Sources tell NBC News that it appears the cyberattack relied on some kind of automated system that rapidly gathered massive amounts of data and within a minute distributed all the information to thousands of accounts on the Internet. The officials also report the suspected Russian hackers coordinated the sophisticated cyberassault via encrypted accounts on social media.

The officials say its not clear whether the attack was sanctioned by the Russian government or conducted by individuals. But, given the scope of the attack, “It was clearly the work of a state actor,” the officials say.

The hacking of the Joint Chiefs of Staff email network on July 27 marked the “most sophisticated” cyberbreach in U.S. military history, Department of Defense officials concede. Various government officials are working to revamp parts of their network in response. In the meantime, officials have spent the last 10 days scrubbing the system and creating mock hacking scenarios before giving military personnel access to it again.

The officials say its not clear whether the attack was sanctioned by the Russian government or conducted by individuals.

Please, don’t go around saying this was maybe not done by the Russian government. Especially if then you go on to say, it was clearly the work of a state actor. I mean, what then?

Are they also considering the possibility that the use of the Russian military in Ukraine is possibly not sanctioned by Putin?

Please recall that Russia tolerates black-hat hackers as long as they don’t make their messes in Russia. So it is quite possible that this wasn’t a sanctioned operation. Doesn’t mean the Kremlin didn’t know about it, though.

I’m still trying to wrap my head around the vague explanation of just how they broke in. I get nothin’ from the story.

People must be very naive and also ignorant of history to think this,
” The officials say its not clear whether the attack was sanctioned by the Russian government or conducted by individuals. ”

How many times did Arafat use “other groups” to conduct terror while proclaiming that it had nothing to do with the PLO or PA.
Like Money, Terror is fungible!
So is spying, hacking and anything else a specific government doesn’t want to be pinned with.
Like Obama, blame someone else.

This site: http://www.legalinsurrection.com is giving me trouble in more than one browser (at least older ones) and in one version of Internet Explorer it now stopped working altogether the last day or two.

Internet Explorer has been discontinued for the Mac and recently changed for other OSs by MicroSoft. The latest version is 11.

I am using Safari on the Mac, and having no problems. Breitbart, OTOH, is extremely slow to load, every page.

I was having trouble, too, earlier, during the pre-debate debate.

I think the site may have been overloaded — this seems to have been the only place liveblogging the pre-debate debate.

I feel sorry for anyone still using IE.

Switch to Firefox or Chrome…they are faster and more secure.

I use Pale Moon (64-bit fork of Mozilla optimized for modern CPS) and it seems to work well.

Can’t wait to see what the Edge users have to say. 🙂

After all the STATE SECRETS Obama and Hillary gave way?

I refuse to believe they had to do any hacking.
They just had to put in IDs and passwords………..

(Remember when the bumbling one…er….Obama traipsed to Europe to convince the Olympic Committee how great he was and that his former home of Chicago should get the Olympics? That delegation of U.S. government agency officials and employees took and then left dozens and dozens of U.S. government laptop computers!)

Gee, I wonder if any of our hackers ever hack into the Russian military. Nah, we wouldn’t do that.

What took them so long, and why the hell were they so clumsy about it?

And Hillary will say… “See, that’s why I kept a server in the basement of my private home. And, by the way, the government owes me $2.2 million for installation, upkeep, and rent for using my basement.”

For the record, the Administrative Office of the Legal Team of the Snap Bean Section of the Ground Vegetable Division of the Department of Agriculture has NOT been hacked.

An insecure server, that gave the Russian direct access to the E-mail servers. They should have known this was going to occur after the Feds found out that Clinton was running her own server. Rogue servers provide easy access to a network.

This was supposed to be in reply to Anchovy.

Um, no. Hillary’s mail server was a stand-alone unit, hence not capable of giving direct access to anything except her email.

I seriously doubt she had PII on the hacked systems there. 🙂

President without marbles = US DOD as a pincushion bullseye.

They wouldn’t have tried this on anyone but Obama (or maybe Clinton).

I guess the Chinese weren’t sharing so the Russians had to get their own.

Snowden has to pay for room and board and Hillary needs to finance her campaign with her Anonymous server. Besides, “The Friends of Humanity” want to level the playing field so they can come out on top.

Somebody will get a Noble Peace prize out of this.