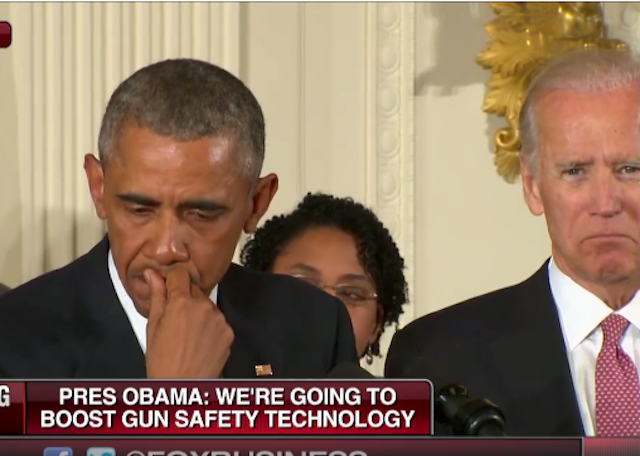 As so many readers reviewed my review of The Big Short, which featured investments, I thought a good follow-up post would focus on the stock market.

Smith and Wesson stocks jumped over 11% in trading. 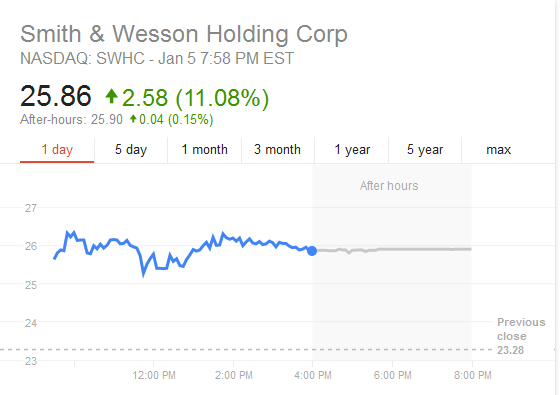 According to a press release, “the sell-through rate of its products at distribution has been stronger than originally anticipated, resulting in reduced distributor inventories of its firearms.”

In other words, people are buying guns faster than merchants can restock the shelves. 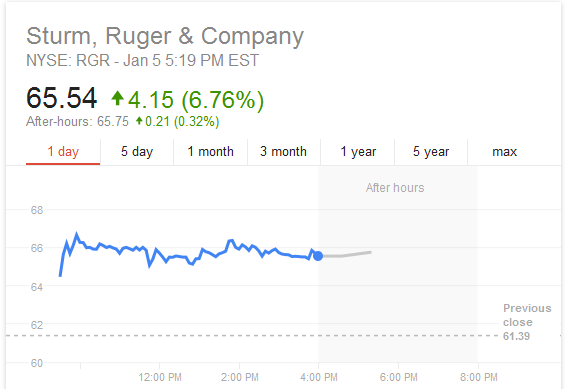 Sturm, Ruger & Co. is now challenging resistance at the highs of the year, trading at a 5-month high. The stock appears to be benefitting from the guidance increase by competitor Swith & Wesson (SWHC) this morning and the news that President Barack Obama is preparing to announce a series of executive actions aimed at reducing gun violence in the U.S.

…[Cerberus Chief Executive Officer Stephen A.] Feinberg is hanging onto Freedom Group, people familiar with Cerberus say. After a near-revolt among limited partners, he’s effectively bought out investors who wanted to get out of the gun business and settled in as the key financial player behind Freedom Group.

Today, perhaps no company better reflect the nation’s fraught relationship with firearms than Cerberus, a private equity firm with more than $29 billion in client assets, and Freedom Group, whose brands include Bushmaster and DPMS/Panther — leading makers of the assault-style rifles that gun-control advocates want to see banned — as well as the storied Remington.

Feinberg, an avid hunter, has gone largely quiet about the gun company, which by its own count sold $1.01 billion worth of firearms and ammunition in 2014. He and other Cerberus executives declined to be interviewed for this story.

He was probably too busy counting his money to chat.

And for those who want to diversify their portfolio, Dr. Michael Burry (the genius investor featured in the film) is focusing on water!

“Fresh, clean water cannot be taken for granted. And it is not — water is political, and litigious. Transporting water is impractical for both political and physical reasons, so buying up water rights did not make a lot of sense to me, unless I was pursuing a greater fool theory of investment — which was not my intention. What became clear to me is that food is the way to invest in water. That is, grow food in water-rich areas and transport it for sale in water-poor areas. This is the method for redistributing water that is least contentious, and ultimately it can be profitable, which will ensure that this redistribution is sustainable. A bottle of wine takes over 400 bottles of water to produce — the water embedded in food is what I found interesting.”

Personally, I sense an investment opportunity in booze. For example, Anheuser Busch stock went up 22% in 2015. And with Obama’s busy signing executive orders during his final year, I think Americans are going to need to console themselves. A lot.

If only the Newtown, CT shooter’s mom had been required by executive order to order a federal background check on her son before he murdered her and took her AR-15, the crisis could have been averted…

I’ve never regretted buying a gun (not that I currently own one, since that awful burglary).

If I had loose money, it would go into more guns.

Rags , you have a heck of a time keeping track of your guns with fishing trip disasters and such. I would tell you how I keep mine safe, although I don’t have any EITHER!

Obama’s EOs create a false sense of security and that defines Progressivism’s arsenal. Nothing will change in Chicago or Baltimore or with West haters.