A Big Thumbs Up for The Big Short!

A Big Thumbs Up for The Big Short! 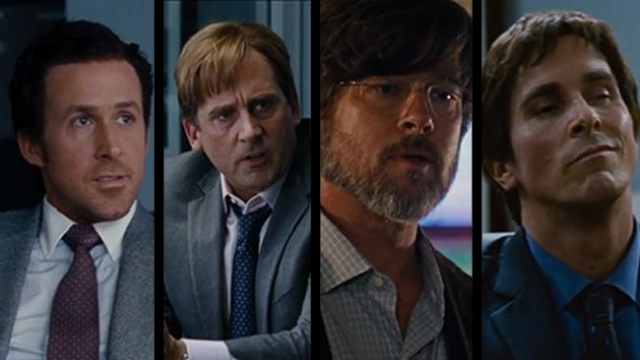 Turns out that the must-see movie of 2015 wasn’t Star Wars: The Force Awakens, but The Big Short!

The movie focuses on four finance professionals and 2 amateurs who predict the housing bubble collapse of the mid-2000s, and use arcane rules and special deals to punish the big banks for their greed while making a hefty profit for themselves.

I must admit, I was skeptical about how much I was going to enjoy the movie when my husband suggested seeing it this weekend. I detest preachy films that bash capitalism and deride businessmen as greedy.

Actually, I was highly entertained. The lead actors were outstanding, especially Christian Bale as Dr. Michael Burry (a savvy investor with Asperger’s Syndrome and a case of chronic honesty) and Steve Carell in the role of Mark Baum (a money manager for a unit of Morgan Stanley). Both men have earned well-deserved nominations for Golden Globe awards, as has both the movie and screenplay.

Beyond the acting, the presentation of complex financial concepts using comedy was innovative and highly entertaining. I don’t think that people are going to forget “synthetic collateralized debt obligations” after seeing the demonstration involving singer Selena Gomez, a black jack table, and $10 million in chips.

You could hear a pin drop in the theater, because the audience was so engrossed in the world of high stakes finance, subprime mortgages, and bank fraud.

My one concern in making this recommendation was that the story was simply another Hollywood fantasy, bearing no reality to what actually happened. Happily, I conferred with my financial experts and they agreed that the movie did capture the housing bubble collapse and the banking crisis fairly accurately.

San Diego colleague and investment expert W.C. Varones gave The Big Short a big thumbs-up, too! He notes the one point where the account was more fiction than fact:

I watched The Big Short recently. Having read the Michael Lewis book, and having lived through the rise and fall of the housing bubble, I can attest that the movie does justice both to the book and to history. And the filmmakers manage to make the discussion of complicated financial instruments understandable in an entertaining way, without dumbing it down.

The main takeaway from the movie is that Wall Street is rigged. The big guys will always get bailed out, and the rest of us will always get stuck footing the bill. Wall Street controls the levers of power in Congress, the Administration, and the Federal Reserve. This should not be a controversial proposition to anyone who has been paying attention the last 6 1/2 years.

But the movie (like the book perhaps, it’s been a while since I read it) departs from reality when it depicts its handful of protagonists as the only ones who saw the housing crash coming. Many people saw the housing crash coming. Even I shorted Countrywide and Impac Mortgage. I got my tip reading the now-defunct I am Facing Foreclosure blog by Casey Serin, an unemployed 24-year-old who had obtained financing from banks to buy at least seven houses. When I saw the promissory note that Countrywide took from this broke deadbeat in lieu of foreclosure, I knew we were on to something.

In the interest of full disclosure, John Tamny of Forbes delves into more of the era’s fiscal background and where the movie took a few liberties. Despite the comedy treatment, the sad fact is that many Americans are still hurting from the housing crash and remain underwater on their mortgages and there are some concerns that there may be a second housing bubble burst.

And, yes…Wall Street firms were the target of snarky Hollywood commentary, and Goldman Sachs one of its biggest. But, in the end, that audience was cheering the people who made huge profits legitimately.

In the immortal words of businesswoman Martha Stewart, “And that’s a good thing.”

Wow, Leslie. You should read more. It would save you from some really mortifying stuff like you posted here.

I read the link…and I disagree with Powerline assessment thoroughly. For example, the movie clearly cites government’s lack of oversight and derides the government bailout.

So, I stand by my opinion, and that of my colleague who thoroughly enjoyed the film and who is a true expert in these matters in his own right.

What you’re talking about is criticism over the failure to oil the rat trap, after the government IMPORTED and fed the rats to ravenous overpopulation.

The GOVERNMENT was a prime mover in this debacle, with its MASSIVE market distortion of the housing market CAUSED by pushing the abandonment of normal lending standards…literally at the point of a regulatory gun…along with wide open money.

Again, I disagree with your interpretation as it relates to The Big Short. But that is the beauty of art, which is what film ultimately is.

And art can be subverted to propaganda…which is what that movie is. Hardly remarkable, as the book it’s based on was THAT, as well.

Propaganda? Now that is funny! I really am going to have to disagree with this assessment. Out of curiosity..did you ever see the movie?

More like the government set the table, and invited the gluttons to dine, telling them, “Indigestion? Don’t worry about it, we have medicine for that.”

The movie was about the people who figured it out.

If you want a movie about Fannie and Freddie and FHA and the Dirty Fed, go make one yourself.

And I guess you missed that part with the bimbo Federal regulator skipping work to bikini-party in Vegas with the bankers she wants a job from.

Or better yet, go see Inside Job, which is exactly the movie that you want The Big Short to be. And also excellent.

One must keep in mind that Ms. Eastman is a California Democrat. There’s never too much government for those folks, and if there’s ever a problem anywhere, its because the government was unable to overcome the lobbyists for the fat cats, the 1%, etc.

If someone still thinks the housing bubble wasn’t driven, at least in large part, by the govt forcing banks to loan money based on race, there’s no helping such a person. There’s a reason Canadian banks, which are far less regulated than US banks, had no property crisis: no forced mortgages.

I’d say that I can’t figure out why she spends on LI, but I’m pretty sure I know why 😉

I’m looking forward to seeing this movie. I worked for 20+ years in the technology sector serving major mortgage banks and wall street firms involved in related securities. Anyone who DIDN’T see the collapse coming had to either be blind or ignorant of the market. I hope the movie puts a fair share of the blame on the politicians who created the environment for the excess with their mindless pandering; Bawney Fwank being the worst of the lot.

Then there are the ill effects we’ll suffer from endless QE during this administration…. don’t get me started. Gee, on second thought maybe I shouldn’t watch that movie after all.

Before succumbing to Leslie’s praise for this movie, it’s worth reading the intelligent Kyle Smith’s review in the New York Post, http://nypost.com/2015/12/10/the-big-short-is-a-condescending-mess/.

Barney Frank shorted himself and us too.

We need to lock Frank and Dodd in the Federal Reserve!

Big banks, Democrats, and not a few Republicans.

They inflated asset prices through policies and leverage (e.g. debt), subverting capitalism and replacing it with socialism or fascism, thereby bypassing organic, sustainable growth of the market, and created an illusion of economic development.

Haven’t, and may or may not see the movie. But Rags and several others who commented upon the role of Fannie Mae and Freddie Mac in the housing bubble are accurate. The movie may confine itself to the actions of those who saw the problem and reacted to their insight so long as it doesn’t bring up then exonerate the role of big government in the matter. (Of course, the producers can do as they please, but their claims to fact allegiance should be questioned.)

That said, if you ever want to make a great movie about greed, corruption, and slimy people, the life, times, and people of Freddie Mac and Fannie Mae would be a gold mine of a place to start.

Dodd is the chairman and CEO of the Motion Picture Association of America.

1) Have not seen the movie – but plan to now.
2) Yes, it’s “art”, but often Hollywood sets out propaganda that informs many about history – I think we can safely bet this follows suit.
3) The housing bubble can be traced to Dodd-Frank. While the banks certainly had their share in this villainy, the gov’t was the prime mover and cause of the collapse.

I hope you mean the bubble can be traced to Dodd and especially Frank, as men, not the legislation. As is so common with the progs, the words they use evoke some sort of surreal alternate reality. They named the legislation that was supposed to FIX the housing finance mess after the guys who CAUSED the mess in the first place.

And certainly Dodd & Frank contributed more than their names to the “fix.”

The logic is a lot like the reaction of the State Dept. and other corners of the federal government to 9/11: “We need to bring more Muslims into the country!”

https://www.youtube.com/watch?v=cMnSp4qEXNM
Timeline shows Bush, McCain warning Dems of financial and housing crisis; meltdown
Too many democrats getting paid off.

I’ve seen video of Democrats swatting down the regulators who warned them of the problems with Fannie/Freddie. Some years later, one of the Democrats at that hearing, Artur Davis, publicly stated his regret over his part in letting the crisis happen. (I remembered the name because of the spelling.) Another year or so after that, he announced that he was no longer a Democrat.

I saw the movie today and loved it so much I’m going to see it again and buy the book.

The acting was superb and the dialogue/script was excellent.

I saw it coming, and my experience in the financial world is nil. But you couldn’t miss the tulips, if you looked.

I’m taking Powerline’s word for it. I also work in Hollywood and know of Adam McKay, the director. He is a committed Leftist. He is not capable of making a film that honestly characterizes government responsibility in an economic crisis. And I thoroughly agree with the contention that economically illiterate and bad-faith government interference, above all, was responsible for this crisis.

I know someone who had a modest job in a mortgage office in the nineties. She said that she and some coworkers were astonished at the loans being approved. It was a clear change of policy, and she had no doubt that it was being directed by the government.

I can remember during that same time period going to the national Mortgage Bankers Association convention and listening to the Fannie and Freddie “sales reps” brag about how much money they were making in commissions. We were with a group of people drinking in the bar and finally one of the guys I worked with called them out and said something to the effect of “Sales? You guys are so full of shit. You’re not SELLING anything. You’re GIVING AWAY money. Who the hell wouldn’t take that? What you’re doing is about as hard as selling pussy on a troop train.”