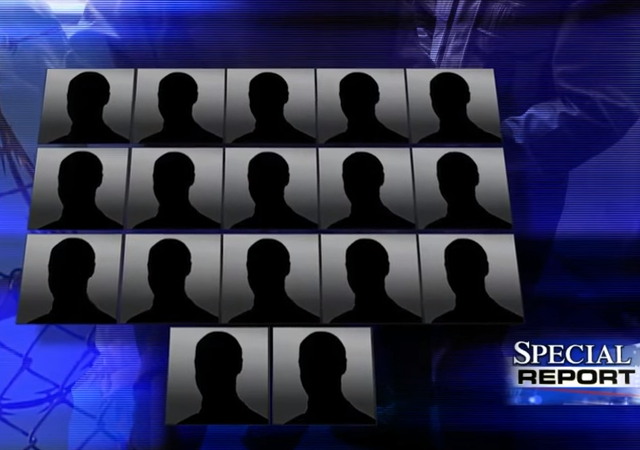 While Obama cried for TV cameras yesterday, his administration was putting the finishing touches on a plan to transfer up to 17 prisoners from Guantanamo Bay. This has been in the works for a while.

Source: ‘Al Qaeda followers’ among 17 being transferred from Gitmo

The group of 17 detainees expected to be transferred out of Guantanamo Bay as early as this week includes “multiple bad guys” and “Al Qaeda followers,” a source who has reviewed the list told Fox News.

Little is known publicly about which prisoners are being prepared for transfer, but the Obama administration has notified Congress it plans to ship out 17 detainees – some of whom could be transferred within days.

While the identities of the men are closely held, the source who spoke with Fox News said it includes “multiple bad guys … not taxi drivers and cooks.”

This is a reference to the administration’s transfer of Ibrahim al Qosi to Sudan in 2012. Despite entering a “re-integration program,” the one-time cook for Usama bin Laden has now fled to Yemen, where he is among the leadership of Al Qaeda in Yemen. That transfer is now said to be a source of considerable heartburn for the Obama administration.

As for those on the docket for immediate transfer, the source told Fox News the administration will not identify the detainees until they are relocated in their new home countries — because knowing who they are in advance would create further roadblocks and increase the controversy.

Herridge goes on to say that multiple countries have agreed to take the prisoners. She also provided more details on Special Report with Bret Baier last night:

Morgan Chalfant of the Washington Free Beacon adds this:

With the completion of the 17 planned transfers, the count of terrorist suspects detained at Guantanamo Bay will be reduced to 90.

President Obama has been pushing to close the military prison for years, having promised to do so when he took office in 2009. However, lawmakers have sounded alarm about transferring Guantanamo prisoners to other countries and to stateside prisons, citing terrorism fears especially in the wake of deadly terror attacks in Paris and San Bernardino, California.

Still, the Obama administration has threatened to use executive action to close the prison.

Leave it to Obama to push for disarming Americans and the release of terrorists in the same week.

Failing all else, expect a Presidential Pardon.

Mr President, why don’t you release the Sandy Hook killer while you are at it. Putting these mass murderer back into the world will result in more American deaths.

Really, is that before or after that killer’s body is exhumed!

You are right! I forgot he committed suicide before Obama could release him.

Congress has been notified? And they’re not doing anything about this?

Congress will do what Congress does: explore possible counter-actions and possibly file legal suits to stop the executive branch from taking direct actions contrary to federal law.

The courts, of course, will do what courts do: take years issuing opinions and appeals, eventually “reinterpreting” federal law to support the executive branch 100%.

In the meantime, real bad guys who hate America and Americans will be in America among Americans. What could go wrong?

What can Congress do about it? Under current law it’s not really any of Congress’s business. They are prisoners of the military, which is under the CinC’s authority, not Congress’s.

You give them too much credit.

“What? OK, well, he’s a lame-duck president who only has a year left, so what harm could he do? Whatever Harry Reid says; we’ve pretty much checked out.”

The terrorist in that video screen-shot looks exactly like Obama will in 20 years.

And those terrorists that he wants to bring to the US? The ones that are too dangerous to release back to the ME? Now long before their lawyers start making habeus corpus noises? I mean, here in the US aren’t there Constitutional guarantees against indefinite incarceration without any kind of trial – and don’t we want to avoid trials because they would highlight our intelligence gathering processes?

No, there aren’t, any more than at Gitmo. The Supreme Court erased the difference between Gitmo and here, thus obviating the whole point of having it there in the first place.

It’s well-established law, going back more than 200 years, that prisoners of war are not entitled to Habeas. All the Court said in Bonbonierre or whatever his name was is that if the prisoner claims not to be a POW the government must establish that he is, and therefore not subject to Habeas. In other words, the Court established a sort of meta-Habeas.