As certain as death and taxes. 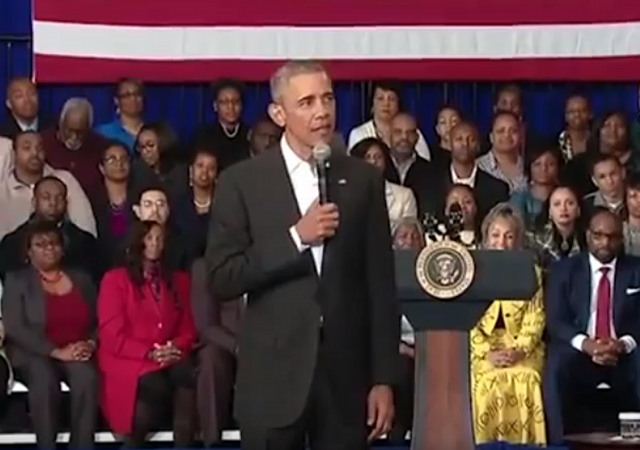 At a town hall event in Louisiana yesterday, President Obama was asked by an attendee if first lady Michelle Obama would ever consider running for president. His answer was a strong no.

Obama Says Michelle Obama Will Not Run for President

It used to be that death and taxes were the only certain things in life, but for President Barack Obama there is a third: Michelle Obama will not run for president.

With Obama now in his final year in office, the focus naturally has shifted to who will succeed him. At a town hall event Thursday with Louisiana residents, Obama was asked if there’s any chance he could talk the first lady into running.

His answer? An emphatic “no.”

“There are three things that are certain in life: Death, taxes and Michelle is not running for president,” he said. “That I can tell you.”

A dozen Republicans and three Democrats are in the running to succeed Obama next January, but speculation seems to be returning to whether Mrs. Obama would ever run, despite her previous declarations that she would have to be crazy to do so.

Obama praised his wife of 23 years for her work to reduce childhood obesity, as well as her efforts with Jill Biden, the vice president’s wife, to help military families. He said he was certain she would stay active after leaving the White House, and launched into a riff on her youthful appearance compared to his head of grey hair after seven years in office.

If you had any doubt that there’s a genuine desire among the left for Michelle to run, just check out this reaction from The Huffington Post:

Obama Crushes Any Dreams We Had About Michelle Obama Becoming President

President Barack Obama let us know Thursday that there won’t be another Obama running for the Oval Office anytime soon.

The president was asked during a town hall meeting in Baton Rouge, Louisiana, whether first lady Michelle Obama would consider making a run for the White House.

Of course, are two other Obamas who could one day take up the family tradition: Sasha and Malia. At ages 14 and 17, though, they’re still a little too young to start planning for their campaigns.

That’s correct. Michelle will not run for president She is all about money and good times. She’ll divorce Barack and take him for all he’s worth under the threat of writing a tell-all book.

Not if she knows what is good for her. Too many people in the 0bama legacy wound up dead. Like the three guys who were allegedly his gay sex partners, or the woman in Hawaii who had access to his birth records, people go missing.

Right.
Do we set the over/under on an event, such as Biden entering the presidential race, or on a particular date, such as the 4th of July. The bets will look like this: I bet Michelle enters the race two days after Hilary is indicted and one day after Biden enters the race.
William J. Clinton and Barack Hussein Obama are both pathological liars. While George W. Bush may have been a genuine-real imitation-Conservative, I don’t get the feeling that he so easily lied to us.

“As certain as death and taxes.”

OK, but is it as certain as “If you like your doctor, you can KEEP your doctor”???

You beat me to it. I was thinking that since Obama said it wouldn’t happen then that means it definitely will happen.

Then Why are you bringing it up?

If Clinton gets tripped up with legal issues – look for a ‘Draft Michelle’ movement.

A good Muslim like Barrack would never allow his wife to run for office.

So ideological question: can a person be a “good Muslim” and a “good socialist” at the same time? My guess is no, and President Barack Hussein Obama would choose to be a good socialist first, and a good Muslim second. Being a good Muslim requires some humility in front of God, and on that score, President Obama is sorely lacking.

“Good socialist” and “good Muslim” seem somewhat contradictory, but consider: Neither is his end goal.

“Good totalitarian” is, and socialism and Islam both function equally well as stepping stones to get him there.

Thus, he can be either, he can be neither, or he can be both. Whatever it takes to further the agenda.

In the end, both a socialist society, or a society ruled by the precepts laid down by the prophet, would both be totalitarian in flavor and manner. So then the question will be: Is this socialist flavored totalitarianism, a la Stalin and Mao, or Islamic flavored totalitarianism, via the prophet Mohammed? Being both won’t work, communist factions use the Mohammedans, while Mohammedans use the communist, each hoping to double-cross the other and come out on top at the end. President Barack Hussein Obama is hoping to play both ends against the middle, and end up on top.

taqqiya: The Islamic doctrine which states that in order to deceive infidels and advance the cause of Islam, a believer may perform even actions that are haram or forbidden to Muslims.

all this means is that she’s certain to run.

This from the man who famously said “If you like your doctor, you cam keep your doctor”.

Prediction: Brokered convention – Donks know they need someone with star power to overcome Trump. Michelle, with full access to the Obama List, is anointed. Meanwhile, Barry goes on to even bigger lights as US General Secretary.

Our narcissist in chief can’t stand the idea.

In that family, I’d be surprised if Barack actually has anything to say about it.

Are you talking about his wife…or Valerie Jarrett?

His wife. Val Jar gets another term or two as shadow President.

His answer? An emphatic “no.”

The Obamas will surely prefer to cash in on their popularity with leftist billionaires and build a “foundation” bigger than the Clintons’ even with no more influence to sell.

The mood for Michelle is more of a reflection of the empty bench of the Democratic Party, a part of the Obama legacy of costing his party a record number of lower offices from the Congress to Governors to state legislatures and even localities. There are few with enough experience for higher office – and most of those can’t run on their records.

Based on his history of public statements, I just have one question:

Michelle is no picnic to get along with. And, Americans are used to this. Nancy Reagan, for instance, had no fan base, other than the fact her husband adored her.

And, I can remember stories during Clinton’s presidency, where, when Hillary’s heels were heard tapping down a hallway, Clinton’s staff would head into any office door they could find in a hurry. Even if it was the janitor’s supply closet.

With Obama you’ve upped the ante, because Michelle’s mom also lives in the White House.

Hillary? She seems to know how to reach out and touch money.

Sorry, seems to have been overused at this point.

Just imagine all the things in Michelle Obama’s past that would need to be covered up by the press and the party – but I repeat myself.