Professor Click, Missouri Communication Professor, has been charged with class C assault for her actions during campus protests last year, according to local news.

Click appears to swat a reporter wanting to interview her during a student protest last year:

The protest made national headlines, particularly due to attempts to keep the press from covering the unrest.

ABC 17 News has confirmed a MU Communication professor has been charged with class C or 3rd degree assault for her actions during the MU campus protests this past fall.

MU Police gave documents to prosecutors on its investigation into Click back in November.

Click was seen in several videos confronting journalists and blocking their access to protests on the MU campus through physical and verbal intimidation.

The MU School of Journalism revoked her courtesy title following the incident.

MU faculty voiced their support for Click in a signed letter, but several lawmakers called for her termination earlier this month.

Columbia State Representative Caleb Jones told ABC17 News the charges are appropriate. “While the University of Missouri seems to have no accountability the judicial system in Missouri does,” said Jones.

Last week, a member of the UM Board of Curators joined the call for her firing. 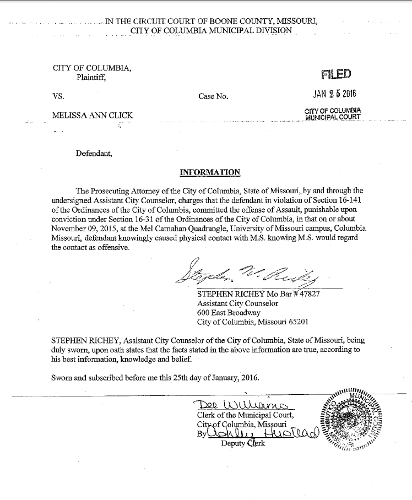 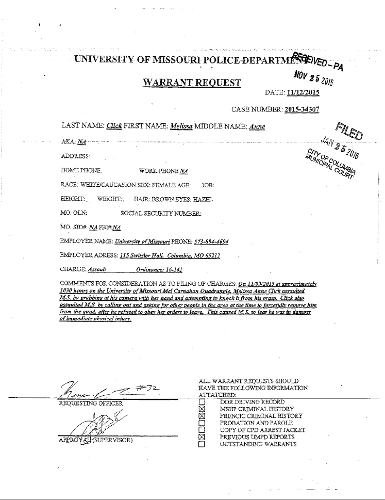 How about 1st Degree Assault on the 1st Amendment?

Maybe charge her with a civil rights violation.

This is step one. Charge her with a criminal violation. Step two is a federal act violating consitutional acts under the color of the state.

Step three is the killer. Sue her into oblivion in a civil trial. By then the facts should be on the record.

First Degree Assault? While no prosecutor would do it a charge of attempted murder of the First Amendment would seem to be more in line with what happened. And by a soi disant “communications professor” no less!

Good. She’ll cop a plea, I predict. It won’t go to trial.

Unless she decides to go full Chicago 7 on us … she may be sufficiently delusional to think that’s a good idea.

According to the Left’s own rules, even the accusation of violence should prevent this person from returning to the university in any regard. Having actual charges filed should include a restraining order preventing her from approaching within more than one hundred feet from any university property or student, and since it was a reporter who was threatened, the same for any camera or microphone.

I think that leaves her a few sections of Antarctica in which to live.

Yes, but you know “the left’s own rules” do not apply to the left.

A few years back, Mireille Miller-Young, a professor at UC Santa Barbara pled guilty to three misdemeanor counts of assaulting a 16 year female pro-life protester on the UCSB campus.

Guess who still works on campus…

I’m sure it seemed like the thing to do at the moment. Mobs tend to encourage that type of behavior.

The courage of that young man is astounding to me.

She should have also been charged with incitement for encouraging others to attack the reporter.

She should be charged with… whatever can be made to stick.

I’d love to see Paul Ryan lead the House in honoring this courageous young photographer in defense of the First Amendment.

It’d be nice to see Paul Ryan just lead the house, instead of sucking Obama’s a-hole.

Ryan is doing his best boehner imitation. He just has to work on boehner’s booze-induced slur.

best news of the young year so far.

This idiot Professor Click is teaching young adults?
Now you know why our nation is in such a mess!

“It was Professor Click, with a Journalism title, in a field of free speech.”

This story warms my heart and slightly restores my faith in a legal system, which has become successively leftist as the years go by.
Will be anxiously awaiting a guilty verdict.