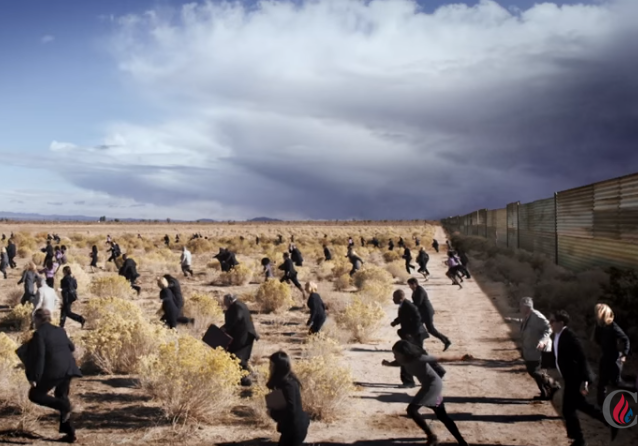 Ted Cruz’s video ad, Invasion, is getting a lot of attention for the scenes of suits running across the border.

But it’s not the key moment in the video.

That key moment comes when the screen splits to view Marco Rubio next to Cruz, with a cotton-mouth expression on his face as Cruz slams the economic impact of illegal immigration: 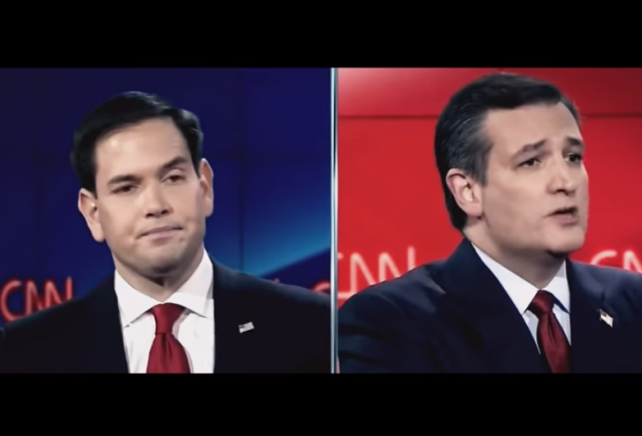 Just after that comes the “Trust Ted” logo: 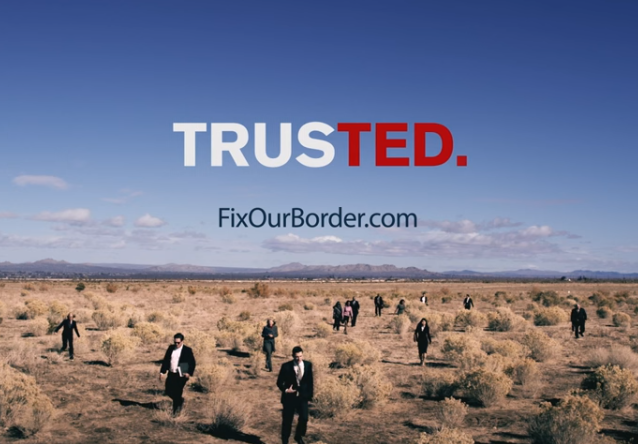 This ad focuses on Rubio’s biggest problem among conservatives. A lack of trust on the immigration issue.

Cruz is smart to focus on it in a subtle way that is a dog-whistle to so many, including I suspect many Legal Insurrection readers.

Rubio’s name never is mentioned. It doesn’t need to be. Unlike the ineffectual blunderbuss Jeb SuperPAC ads attacking Rubio, Cruz exploits an important and existing weakness.

Rubio really blew it when he supported amnesty.

Not so much as “blew it” but that he revealed his character issues and lack of principles, at least the ones that the grassroots elected him on. He couldn’t wait to become a DC politician; he proved he can’t be trusted or genuine on anything.

It’s not the amnesty issue for me, it’s his gladhanding with Chuck Schumer, a man who despises everyday Americans, a man who has done everything he can to destroy conservatives and their patriotism and love for America. If you yuk it up with the other side, you’re not on our side…

Cruz and his people are WAY smarter than any of his rivals understand….

Cruz is definitely my main choice for President, and he’s the clear #2, but most polls have Trump with a large lead over him.

Being smart isn’t enough, he needs a big boost in the next few weeks.

Cruz is competitive with Trump in a few early states, just not in NH. It will be interesting to see how delegates stack up after the SC primary. It could be a close Trump/Cruz race with everyone else pretty far behind.

Baloney. The way things stand right now, he’s going to lose and lose big. He may pick off Iowa but that’s really the only place he is that competitive. I am sure they will run some phony polls out there but this race is Trump’s to lose. Terd Cruz is not a national candidate.

The man in the beige jacket at 0:20 looks like a younger George Soros.

I wondered about that picture choice. I thought it was just a reminder that Rubio was for amnesty before he was against it (or so he says…..we know better). And that it was in the debate where Ted Cruz made that statement about “if the ‘suits’ were being threatened….”

Nice ad … though at first I thought one of them was mocking Cruz, since he wanted to increase H-1B visas from 65,000 to 325,000. Sessions said he thought Cruz might change on that issue, and Cruz has expressed concern about its abuse. But I don’t know that he actually changed.

In order to protect our national security and serve American workers, he will suspend and audit H-1B visas and halt any increase in legal immigration so long as American unemployment remains unacceptably high.

He doesn’t give any numbers, but it seems he has “walked back” that 400% increase.

Bringing in the best and brightest is good, unless it is done to replace American workers, which it largely is, afaik. And we really want our top people to have American loyalties, not keep building a Silicon Valley of multi-culti globalists, as dreamy as the left may think that nightmare would be. H-1Bs can be more controlled and work cheaper, but also are less loyal so send money home for their own economy, and maybe even pirate the technology. We need home grown Americans.

Trump also wants that big open door in his border, and H-1Bs, till he heard of the Americans having to train their cheaper foreign replacements.

Yeah, I work in Silicon Valley. H1Bs are a big issue, though simmering below the surface.

It’s similar to Mexican immigration, which results in no summer jobs for our kids and lack of jobs for young black kids who would otherwise have a chance to start up the ladder. Although being in the US makes them better off, it’s not fair for the Mexicans to be powerless workers either.

The H1Bs allow employers to mass-import young well-educated Indians and pay them only a fraction of what they pay the older, whiter previous work force. It’s an injustice to the Indian workers. It’s an injustice to America’s future too as the job market gets too competitive for American kids to choose tech as a career.

Don’t recall where I saw it, but there was an article the dems in California were worried they’d lose their super majority.
I was surprised the dems didn’t outlaw conservatives with the super majority. Maybe next year if they’re really scared.

I noticed the biting Rubio cameo as no doubt others did. It might be more accurate to say it got little *media* attention.