Hillary should be afraid, very afraid. Should we? 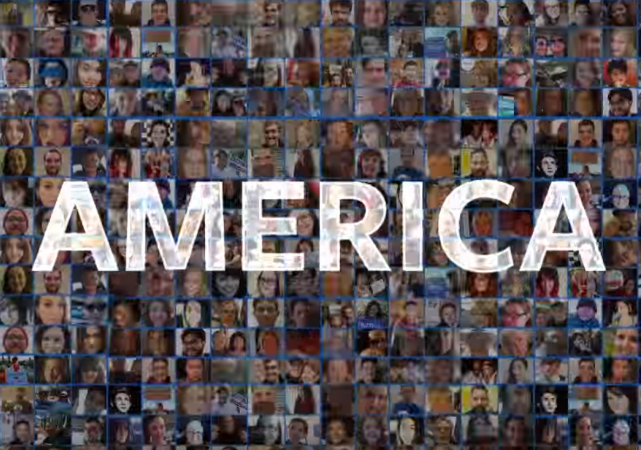 In Democratic circles, people like Claire McCaskill are worrying that Bernie will be a general election disaster because Republicans will run ads with a hammer and sickle on them.

So how will the self-identified Democratic Socialist convince America to vote for him?

I agree with this assessment of a new ad released by Sanders:

Regardless of whether you're a Bernie Sanders supporter, this is one of the best political ads you'll ever see. https://t.co/hPnBHuv0sz

Watching that ad, Hillary Clinton should be worried, very worried.

UPDATE – Aleister has prepared an alternative version of the ad:

Between the “Hope and Change” of “We’ve all come to look for America” and “Make America great again” populist pap of Sanders and T-rump (who share views on BIG GOVERNMENT, market economics and property rights), we could be SOOOOOOOOOooooo screwed.

When Bernie says “they all come…” is that a veiled reference to his 1972 gang-rape-fantasy essay?

You said T-Rump. Ha Ha. You are so clever, raghead.

Bernie for President – A future to be in debt in

Not sure I’d call it one of the best. One of the most misleading, no doubt.

There are no black people in the ad, until a brief glimpse of a black woman at 0:40.

I don’t think Black people turn out for Sanders, especially if he continues to run ads like this. Especially if he runs up against Trump, who has had his name dropped in rap sons for 25 years now.

As an aside, “they all come to look for America…” Is kind of horrifying if you are at all concerned about immigration.

As for Hillary, she should be concerned because her debate was horrible for her. She was arguing practicality and reason and more of the same against Santa Claus government liberalism in front of democratic voters. Yikes! After a lifetime of politics, doesn’t she understand her base?

I noticed that. The ad is almost as white as the prime-time anchors at MSNBC. Which, if you think about it, is fitting…

It leaves all to the imagination of the viewer as to what they want and will get in “coming to America”. It is upbeat, full of excitement, anticipation and a bright future to be achieved together. Hence, I find it superficial and a veneer covering the particle board the US is turning into with “hope and change”, crony capitalism and, with Bernie, a deep plunge into socialism. No uniting culture, no uniting language, and no uniting within defined borders… it is whatever you want as long as someone else is paying for it. Smile comrades, here is the modern version of “land, peace, bread.”

“Money for Nothing”, Dire Straits

More to the point of Bern’s campaign and a better tune.

Yes, behind Door #1, the Bolsheviks promised “Land, Bread and Peace”; but what they *delivered* was behind Door #2, which was “Forced Collectivization, Breadlines, and The Gulag, Comrade”.

Socialism is the biggest bait + switch scam of all time, and Bernie is no different.

King George III was genetically deficient which resulted in madness. Sanders doesn’t have an excuse.

Hey, I’ve been in Vermont. You’re luck to see a “people” at all…

I lived in northern Vermont for about three years before moving to Texas sixteen years ago. They are almost all white up there.

The only color they have to deal with every day is what shades of amber they find after making their maple syrup. ( Mmmmm, maple syrup on pancakes ……… )

I would counter, showing the BLM group taking over his stage and microphone with the message: “What were they looking for? Leadership? If so, they didn’t find it.”

I’m sick of hearing about how many whites or blacks or browns are in everyone’s ads or pictures or boards of directors, etc.

So the Dems are scared to death that Bernie might win the nomination to be the Democrat candidate for president.

Say, maybe a political party (like the Dems) could make up a rule that says anyone who wants to run for office under their party’s name should like, you know, BE A MEMBER of their party. They could get rid of Sanders quickly — he is not a Democrat and really shouldn’t be running for nomination as the candidate for the Democrat party.

Dems are all so eager to make up rule after rule after rule. You would think they could come up with one that would actually make sense once in awhile.

Sing joyfully together:
“Assembling bombs in a New Jersey mosque.
They’ve all come to look for America.”

Nothing like a Simon and Garfunkel tune that’s about a million years old, but then Bernie’s a relic as well.

Plenty of present day wanna-be’s for the “relic” days. They may think of the past fondly. I think that with the PC crowd today and intimidation to people to stay silent…. “The Sounds of Silence” is way more appropriate to the war being waged now. Even relics have their place.

Correction “The Sound of Silence”….

That’s actually what I was expecting:
“Hello darkness my old friend,
I’ve come to talk with you again.
Because a vision softly creeping
Left it’s seeds while I was sleeping.
And the vision that it planted in my brain
Still remains
Amid the Sounds of Silence

The way this election season is shaping up, darkness and silence may descend upon the land that was once “the shining light on the hill.”

And in the naked light I saw
Ten thousand people, maybe more
People talking without speaking
People hearing without listening
.
.
.
And the people bowed and prayed
To the neon god they made
And the sign flashed out it’s warning
In the words that it was forming

The warnings about the end result of various forms of Socialism (and cronyism) have been written and shouted, and more recently scrawled and whispered, for decades — yet the sheep lemmings still follow.

Old washed up hippies will vote for Bernie… as will young people who have not been taught that socialism necessarily subsumes the individual. The left will lie about that but they know full well that individual rights are not compatible with a society that is designed to make everyone equal.

And sadly, their economic illiteracy will enable Sanders to finish Obama’s mission of destroying America…but “from a good place”…right?

Black reparation demands will kill the Bern, and the Hill as well. They are both being pressured mightily on it. If they support it, they’ll lose too much of the non-black vote, if they reject it, they’ll lose too much of the black vote. Either way, they’ll fail to recapture the Obaman coalition. Bernie’s equivocating, offering a “yes in theory” depending on how it’s structured, clearly buying time and looking for an out. Then again, when your proposals factor out into the $15-20 trillion range, what’s another couple trillion, eh?

Hillary is a Socialist.

Bernie is a Communist.

Given that virtually all media outlets, including here at LI, refuse to point out that fact its clear that Bernie’s already cleared the first major hurdle.

I am sick of all ads on TV, where there is so many blacks & Arabs in ads, that it makes it look like Whites are in a Minority. Black men are always next to white women, like they are always together. Socialism is being taught in HS & College. The ” Beer,” busses that will be taking students to the Polls again, will force an outcome that the students have no idea as to what that creates. They are mainly concerned with the ” Diversity,” count & young people wanting to start at high salaries.

I noticed that Bernie’s ad did not include any street scenes from Washington D.C., Chicago, Detroit – you know, the cities where his advocated policies have actually been enacted.

The answer is: YESSSS!

(see above for more commentary)

I find it funny when the hardcore progressives accuse Trump supporters of being uneducated rabble; then praise something completely devoid of substance like this.

What message did Bernie have to approve at the end of the ad? There literally was no real message, just a jingle and some random scenes of workers spliced in with his tour. Yay Socialism!

He will do what Socialists always do…lie.