Hillary: I’m not The Establishment, Bernie Sanders is

Hillary: I’m not The Establishment, Bernie Sanders is 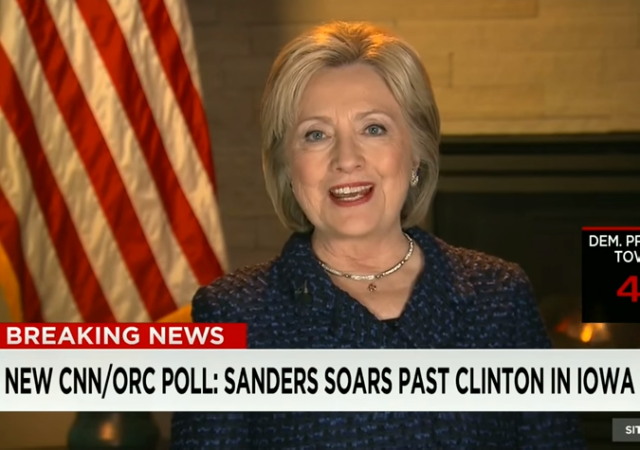 Hillary Clinton on the other hand is not just part of the establishment, she is the walking embodiment of it.

Here’s how the conversation went, via CNN:

Hillary Clinton on Thursday sought to turn Sen. Bernie Sanders’ “establishment” attack right back on him — saying he served in Washington much longer than she did.

She also attacked his experience and fitness to lead the country, criticizing his suggestion that the U.S. should warm its relationship with Iran.

The Democratic front-runner told CNN’s Wolf Blitzer on “The Situation Room” that Sanders’ charge that Planned Parenthood and the Human Rights Campaign support Clinton because they are all part of the establishment didn’t make sense to her.

“I just don’t understand what that means. He’s been in Congress, he’s been elected to office a lot longer than I have,” Clinton said.

She noted she only served in the Senate for eight years.

“He’s been in the Congress for 25. And so I’ll let your viewers make their own judgment,” Clinton said.

As you can probably imagine, some progressive Bernie fans have taken issue with Hillary’s claim.

Although Clinton’s assessment might be accurate in some ways, considering Sanders’ stances on gun control in the past, for example, it is worth noting here that Hillary Clinton focused solely on elected office when making her point. Which, by all accounts, makes her point rather tepid. Clinton has served as the first lady with President Bill Clinton for eight years in the ’90s, meaning she would be much more familiar with the machinations that drive the functioning of the White House than Bernie Sanders would.

Moreover, Clinton also served as Secretary of State in President Barack Obama’s administration for his first four years in office, which sort of enforces the Vermont senator’s opinion that Hillary Clinton is much more part of the establishment than he perhaps ever would.

Clinton’s selective argument of only talking about time served in the Senate does not do her any favors, in part because that is exactly the kind of thing Bernie Sanders has warned his voters not to fall prey to.

This certainly is an entertaining election, so far.

The chutzpah is strong with this one…

HC, “I’m not the establishment.”

If you ever needed proof that this harridan will say anything, absolutely anything[*], here it is.

*Certain exceptions apply, such as, “Life believes in the womb at the instant of conception. Abortion is morally wrong. If elected I will apply a litmus test to every federal judge I nominate, especially those to the USSC.”

“I will do my utmost to reduce taxes, including pushing for the repeal of the 16th Amendment which has been perhaps the biggest cause for the growth of government. Government has too many resources, all of which has been taken from the people.”

“Harridan”, what a GREAT word for her! I did’t know what it meant, so I looked it up. Had a picture of Hillary right there!

The only establishment she should be part of is the Lewisburg Federal Corrections Facility.

But, really, what do you expect her to say???

“Guilty as hell, free as a bird–America is a great country.”

I mean…yeah, that’s what she WOULD LIKE TO SAY.

But it wouldn’t be the politic thing…

Hillary can prove to Sanders voters that she is not establishment by her use of a personal server for national secrets during her Sec. of State days.

In the immortal words of the Great Sage of the Yankees “It’s deja-vu all over again!”

No surprise here. Earlier in the week Hillary too credit for getting federal money for the City of Flint just by being on the Rachel Maddow show at the same time the governor requested the money from the Feds.

She’s not grasping for straws. She’s gasping for air.